Please ensure Javascript is enabled for purposes of website accessibility
Log In Help Join The Motley Fool
Free Article Join Over 1 Million Premium Members And Get More In-Depth Stock Guidance and Research
By Zhiyuan Sun – Aug 9, 2020 at 6:26AM

Having enough cash on hand during market sell-offs can allow investors to purchase both value and growth stocks at a bargain price. Here are two companies to consider.

Cash is simply king during times of high market volatility and deep global economic uncertainty. With the rampant spread of COVID-19, many companies have seen their stock prices plunge due to hardships, while others have seen their shares skyrocket as they work toward developing solutions to end the deadly pandemic.

This market has created ample opportunities to buy reputable businesses at a bargain price, and it's also given investors the chance to buy solid growth companies at a high price with an eye to selling even higher. Those with unallocated capital in their investment portfolios who act decisively can often reap high rewards.

Today, let's look at two healthcare companies -- a value stock and a growth stock -- that, while they have been oppositely affected by the COVID-19 pandemic, have one thing in common: the ability to reward investors who act now. 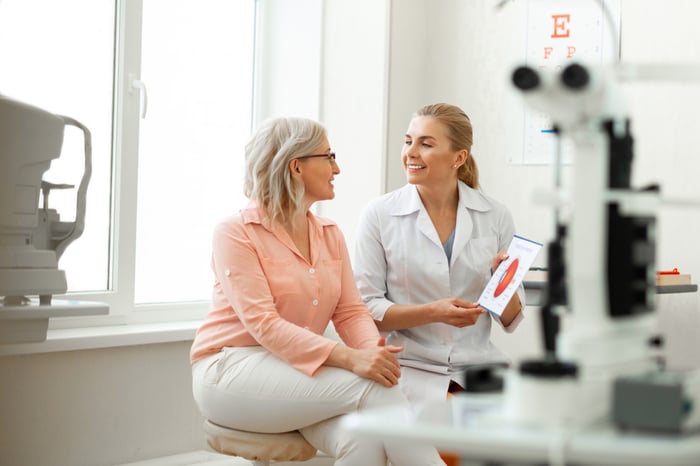 A pharma titan with an unexpected catalyst

After a series of disastrous leveraged acquisitions, management at Bausch Health Companies (BHC -6.96%) has been actively working to turn around its core business: vision care, gastrointestinal treatments, a diversified drug portfolio, and more. Since CEO Joseph Papa took office in 2016, the company has paid off a cumulative $8 billion in debt, divested more than $4 billion in non-core assets, and resolved many legacy legal issues.

The problems, however, may be too big to solve using current measures. Given its $7.1 billion market cap, the company may look undervalued at first, but in context this is far from the case. Bausch Health Companies still has $23.4 billion in debt on its balance sheet, and management is currently projecting $1 billion in cash flow from operations for 2020. In other words, the company's debt-to-cash flow ratio is at a staggering 23.4, making its price-to-earnings ratio of 7.14 much less enticing.

Furthermore, Bausch Health Companies' revenue declined by 21% in the most recent quarter, largely because COVID-19 forced many retail eyewear stores to close. That is a lot of money at risk, especially considering that up to $1.4 billion of the company's revenue will suffer severe competition from generic products in the near future.

It is worth noting, however, that the company still projects between $7.8 billion and $8 billion in revenue, between $3.15 billion and $3.30 billion in adjusted earnings before interest, taxes, depreciation, and amortization (EBITDA), and a gross margin of 72% for 2020. These metrics are all down slightly from 2019's results.Fortunately, the company has an upcoming catalyst that may turn the tides.

On Aug. 6, Bausch Health Companies announced it would be spinning off its Bausch & Lomb eye care segment into an independent, publicly traded company. Shareholders would own stocks of both companies after the divestiture completes.

The best part of this move is that it opens up possibilities for one of the company's main subsidiaries to be acquired. Eye care rivals, such as Alcon (ALC -1.71%) and The Cooper Companies (COO 0.11%), are currently trading at between 4 to 6 times their price-to-sales ratios, and they may want to have Bausch & Lomb under their wing. Meanwhile, Bausch & Lomb is generating approximately $3.7 billion in annual revenue -- so if it's spun off and acquired at competitive prices, it may fetch close to $18.5 billion.

A post-spinoff acquisition would likely reward investors because the acquiring company usually pays a premium over the company's book value and current stock price. Hence, Bausch Health Companies could actually now be one of the best healthcare stocks to buy in terms of value and a favorable risk-reward proposition, if the spin-off was to succeed. 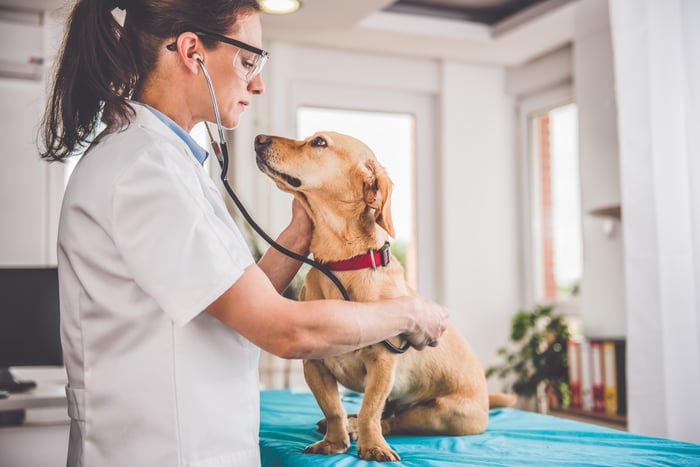 In the second quarter of 2020, one of the nation's leading pet health companies, Trupanion (TRUP -4.09%), reported that 744,000 pets were enrolled in its insurance plans. The spread of COVID-19 has not undermined pet owners' desire to keep their pets healthy; in fact, the company's pet subscriptions increased 15% year over year as of June 30.  In fact, more and more pet owners have recognized the importance of obtaining health insurance to cover unexpected veterinary expenses during these uncertain times.

Not only does Trupanion offer such health solutions, but its brand has a good reputation. During the most recent quarter, the average monthly retention rate for its insurance policies was 98.6%.

With this metric in mind, and considering that the company spent $84 million worth of operating income to acquire new pets under its insurance plan (acquisition cost is about $199 per pet per quarter), this yields about a 45% internal rate of return on every single pet it covers. If the company's operating income above sounded slightly low, that's because it spent an extra $43 million in acquisition costs to capture more pets for that lucrative return.

Currently, Trupanion is guiding for $487 million to $491 million in revenue for 2020. At a market cap of $2.63 billion, that means the company is trading for roughly five times sales. If that sounds expensive at first, it isn't really in context, considering investors will be paying for 27% annual revenue growth with their stock purchase according to the company's most recent annual guidance.

The company also has $105 million in cash on its balance sheet to offset $27.3 million in long-term debt. Overall, Trupanion is a high-flying, financially healthy, and leading pet insurance that healthcare investors will not want to miss.