The tech stock saw surging growth in the second quarter.

Shares of Sea Limited (SE 0.09%) finished last month up 14%, according to data from S&P Global Market Intelligence. There was little company-specific news driving shares of the Southeast Asian tech company higher, but the stock seemed to benefit from macroeconomic developments and bullish momentum in e-commerce stocks during the month.

As the chart below shows, the stock's movement was erratic, but a surge at the end of the month gave it double-digit gains for July. 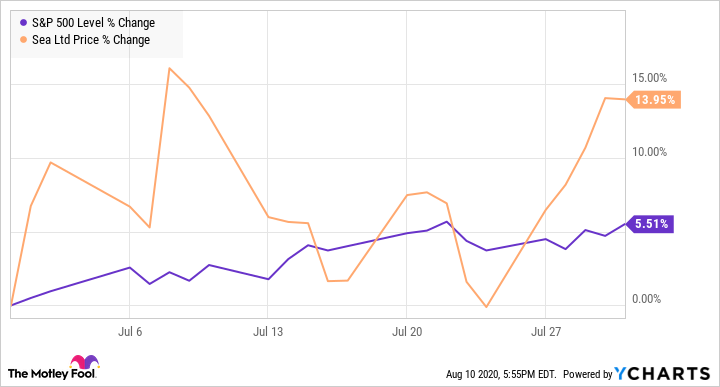 Sea Limited shares surged to start the month as Stephens initiated coverage with an overweight rating and a price target of $130. Analyst Jeff Cohen noted "very favorable demographics" in its home region, and strong prospects for all three of its business segments: digital gaming, e-commerce, and online payments. The following week, the stock climbed again on another bullish analyst note as Citigroup raised its price target from $79 to $138. Analyst Alicia Yap noted strong growth in its Shopee e-commerce marketplace and Garena gaming platform from the effects of the coronavirus pandemic. Yap wrote that those shifts would be structural, helping to accelerate the company's long-term growth. The same day, App Annie said that Garena's Free Fire was one of the top-performing mobile gaming apps in the world in the second quarter, ranking No. 3 in downloads and No. 5 in monthly active users.

Finally, at the end of the month, the stock gained in synchrony with several strong earnings reports from e-commerce stocks, including Shopify and Amazon.

Sea Limited has been among the better-performing stocks on the market this year, gaining 206% year-to-date. Its digital gaming, e-commerce, and online payment businesses are all well-positioned to thrive during the pandemic. Given the stock's momentum and the company's positioning, investors are expecting the company to deliver a strong earnings report on August 18.