Why Penn's future seems so bright.

In the past few years, the Robinhood trading app has leveraged its user-friendly interface and zero-commission model to reach 13 million users. Its list of the stocks that are most widely owned by its users includes a lot of risky companies that investors -- especially novices -- should approach with extreme caution. Interestingly, however, it also includes Penn National Gaming (PENN -1.88%), a casino operator staking its claim in sports gambling thanks to a promising new partnership.

It's easy to see why Penn appeals to investing newcomers -- it operates in both an exciting new industry and a mature one with an obvious catalyst in the eventual end of the COVID-19 pandemic. But I think its fundamental strength will make it an interesting investment even when the hype is gone. Here's why. 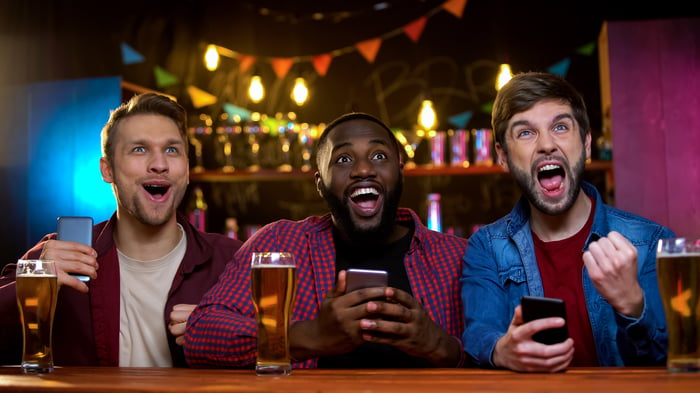 Why Penn has the market's attention

This year, Penn announced a partnership with the media powerhouse Barstool Sports. Penn bought 36% of Barstool. Why is this exciting? Today, Barstool attracts 66 million monthly active users to its sites. The user characteristics are quite appealing as well: About 62% of Barstool users gamble on sports, with nearly half doing so weekly. That works out to 41 million new gamblers for Penn.

Furthermore, sports gamblers are generally younger than Penn's traditional casino customer. Barstool's ability to attract 27% of Gen Z Americans on a monthly basis is an effective way to diversify Penn's demographics. This could be part of the reason Penn is so widely loved on Robinhood, a service with a relatively young following of its own.

Penn plans to include all of the content that makes Barstool's sites so popular. This includes the fourth-ranked podcast publisher on the planet, and hundreds of millions of social media followers to leverage.

Together, the partnership plans to debut its Barstool Sports Book in September this year. Importantly, COVID-19 has not created any delays on that timeline. To start, the betting application will debut in Pennsylvania before expanding to several more states throughout the remainder of the year. In preparation, Penn signed licensing deals with every official data provider of the major sports leagues.

Sports gambling as a whole is estimated to grow by 11.5% to $103 billion by 2025; Penn's market cap is under $6 billion. With Barstool's gigantic following -- and a relatively well positioned casino portfolio -- Penn has a great chance to take meaningful share out of the $150 billion sports betting industry. In the sports gambling space, Penn National Gaming is as well-positioned as anyone to thrive long-term.

A large part of Penn's business is still as a casino operator across 19 states. Its portfolio caters to more regional clientele compared to global properties on the Las Vegas Strip or in Macao. This is preferred in our current pandemic environment, which is shutting down much of the country's air travel. Penn's casinos will be instrumental in providing cash to invest in Barstool Sports Book, and they seem to be recovering rather quickly.

Penn's regional tilt enabled the company to return to positive free cash flow by June 2020, while larger competition such as Wynn Resorts continues to burn through liquidity.Today, over 95% of Penn's properties are open once more, with revenues at an incredible 94% of pre-COVID levels. Importantly, it does not collect more than 15% of company revenue from any individual state. This means if states (such as California) decide to reverse reopenings in light of more virus spread, Penn is relatively protected from a geographic standpoint.

While attendance is down at Penn casinos, average spend per consumer is up over 40%, which allowed the company to expand EBITDA (earnings before interest, taxes, depreciation, and amortization) margins this quarter regardless of the shutdowns. Furthermore, the company's digital iCasino growth mitigated much of the pandemic damage. Growth for this segment  paced 108% for the quarter, with strength continuing into this month.

Penn National seems to be enduring COVID-19 relatively well compared to some of its competition. A regional portfolio of properties enables a more speedy recovery while the Barstool Partnership affords Penn the chance to thrive in sports gambling going forward. I think Robinhood investors will do well if they buy Penn for the long term.