Please ensure Javascript is enabled for purposes of website accessibility
Log In Help Join The Motley Fool
Free Article Join Over 1 Million Premium Members And Get More In-Depth Stock Guidance and Research
By Howard Smith – Updated Aug 12, 2020 at 11:58AM

GoPro may be in the top 10 list for its low share price, but there's a better alternative.

Robinhood clients seem to have a penchant for low-priced stocks. Five of the 10 most popular stocks on the newbie-friendly trading app as of Monday's market close were priced around $15 or less per share. But investors should know that a low share price doesn't make a stock a good value.

If you have $100 to invest, you don't need to put it all in a $10 stock just so you can own 10 shares. One share of a $100 stock will have the same effect on your portfolio -- and so will $100 worth in fractional shares of a higher-priced stock. Rather than focus on share price, investors should instead think about the business and its prospects.

One stock in Robinhood's top 10 that looks like it's attractive just for its low share price is action camera company GoPro (GPRO -0.80%). But there's another outdoor recreational technology company that has stronger fundamentals and better prospects: Garmin (GRMN -0.79%), which became famous for its mobile GPS products more than 20 years ago and has been staying ahead of the curve ever since. 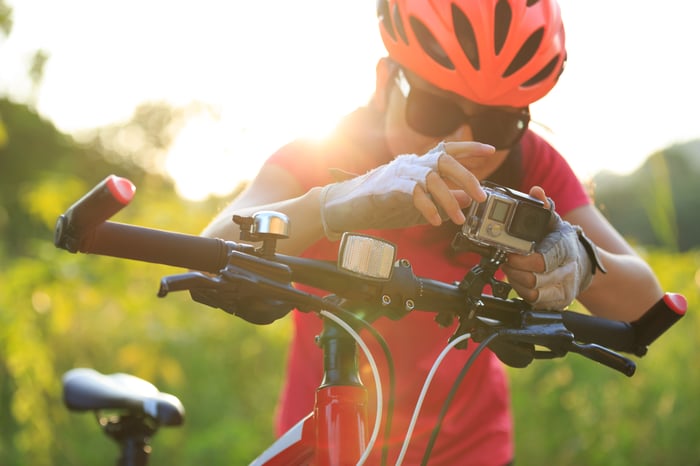 Innovative, but no longer unique

GoPro came out with its first HD Hero action camera in 2009, and has sold more than 37 million since. But the company hasn't reported a profitable year since 2015, and it will not be profitable again in 2020 after combined net losses of $115 million in the first two quarters. The company says it is transitioning to more of a direct-to-consumer model, which will give it "a significantly lower threshold to profitability."

Garmin, however, is already highly profitable. It generates enough free cash flow to cover a generous and growing dividend, and it had $2.7 billion in cash and marketable securities in the second quarter, with no debt. That cash level, which represents 14% of its market capitalization, will stay strong and allow the company to reinvest in the business as it continues to grow revenue and earnings. Garmin has been steadily growing sales and profits for years. A five-year chart shows that trend, while GoPro struggles on both important metrics: 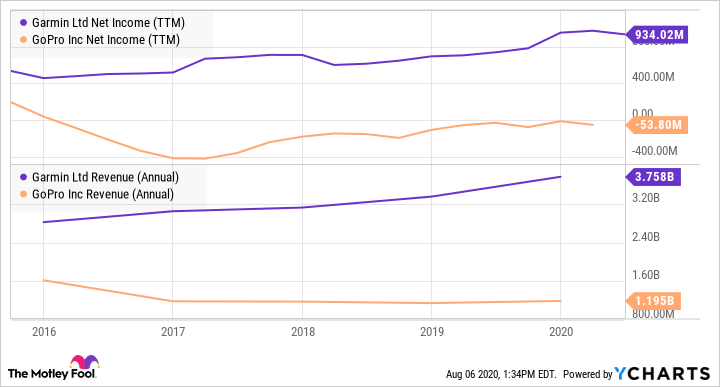 Much more to offer

Garmin offers devices for many outdoor and recreation activities (including an action camera of its own). While the market for automotive GPS has been in decline, the company's other four segments have become the growth drivers. Outdoor, fitness, marine, and aviation now make up more than 85% of total revenue, which is a big shift over the last decade. And like GoPro, it has a supporting ecosystem for all of its devices, with a tracking and analysis tool in its Garmin Connect app.

Data source: Garmin financial filings. Table by author. *Data shown as even split between outdoor and fitness segments, which were previously reported as single unit.

Garmin is also in a position to benefit from new recreation trends since the onset of the coronavirus pandemic. People are seeking more ways to enjoy the outdoors, where social distancing is easier. Recreational vehicle (RV) manufacturers have been reporting strong sales, and so have companies that make all-terrain vehicles and boats, like Polaris and Brunswick, respectively. In the most recent quarter, Garmin said it launched a new RV navigator "specifically geared for the RV and camping lifestyle."

Both GoPro and Garmin experienced slowdowns in business due to the pandemic. But Garmin went into the crisis with growing sales, strong margins and a fortress-like balance sheet. It has announced that business rebounded quickly from April 2020 lows, and that should continue.

Robinhood investors who are making GoPro a top stock on that platform would benefit more by looking into Garmin instead. Though the share price is up off its recent lows, the valuation remains reasonable as the business fundamentals return to pre-pandemic levels. The price-to-earnings ratio (P/E) is currently about 21, which is close to where it's traded over the last few years. Previous annual sales growth levels of around 10% should return quickly, making it a reasonable valuation at today's price. And that's what an investor should be considering, rather than the level of the share price alone.