Many investors follow Warren Buffett's moves more closely than those of any other investor. The CEO of Berkshire Hathaway (NYSE:BRK.A) (NYSE:BRK.B) is famous for his no-nonsense attitude toward investing and his emphasis on value. When he makes decisions about stocks, you can be confident that Buffett's motivations are never about following the crowd or jumping into a popular trend. The Berkshire leader's discipline is what has earned him such an impressive track record as an investor throughout his long career.

This past weekend, Berkshire Hathaway released its latest earnings report. Even though the company won't make its formal filing about its recent portfolio moves until later this week, the earnings release did reveal that Buffett has a new stock among his favorites -- and he ramped up purchases of that stock dramatically during the second quarter. 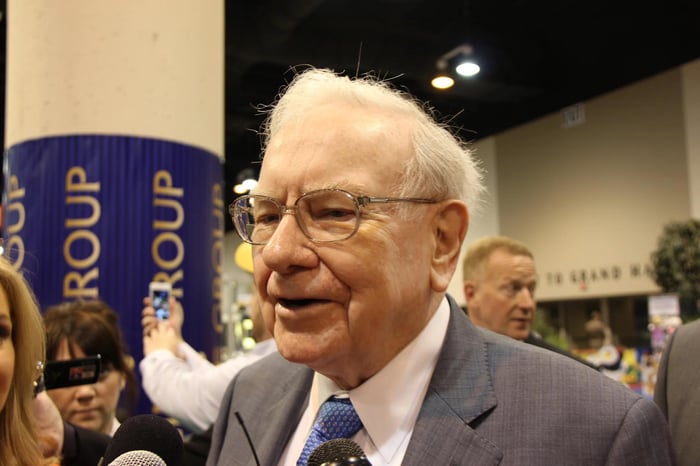 Betting big on a Berkshire bounce

The stock that Warren Buffett showed a new appetite for in the past three months was Berkshire Hathaway itself. The insurance giant ramped up its spending on stock buybacks during the second quarter, easily outpacing repurchases from the first quarter and renewing confidence among investors about Buffett's views on his company's prospects.

All told, Berkshire spent more than $5.1 billion on buybacks. Repurchases of 1,822 Class A shares accounted for $486.6 million, coming in at an average price of just over $267,000 each. Berkshire concentrated most of its buyback activity on Class B shares, paying an average of $175.72 per share to buy back more than 26.3 million shares and spending $4.63 billion in the process.

Buffett broke down Berkshire's repurchase activity into two periods. During May, the insurance company made the bulk of its buybacks, taking advantage of somewhat lower prices. Yet even as the stock moved slightly higher in June, Berkshire kept spending, with roughly $1.69 billion spent that month compared to the $3.43 billion in buybacks for May.

To put the buyback number in perspective, keep in mind that Berkshire repurchased only about $1.58 billion in shares during the first quarter. That was despite the fact that prices were much lower during the worst of the coronavirus bear market. Moreover, the timing of buybacks during the first quarter was poor, as Buffett paid over $215 per B share on average for the stock he bought back from January to March.

Yet the more important takeaway for investors from the ramp-up in buyback activity is that Berkshire and Buffett feel confident enough about the state of the company's core insurance business to dedicate significant amounts of capital to purchasing Berkshire stock. During the annual meeting in May, Buffett seemed less than fully optimistic about the then-current state of the insurance industry. That suggested to some that he believed Berkshire would need as much capital as it could get to survive the coronavirus crisis. Uncertainty about liability for insurance claims related to COVID-19 played a key role in that muted optimism.

Despite having a huge cash pile, spending more than $5 billion on repurchases sends a clear signal that the Oracle of Omaha is comfortable using capital for purposes other than maintaining insurance loss reserves. With the stock having jumped back into the $210s for B shares, moreover, the purchases were a good value for Berkshire -- once again showing Buffett's impeccable timing for taking advantage of opportunistic deals when they come.

Will more buybacks be coming?

With the recent rebound in Berkshire's share price, the stock now trades at a more typical price-to-book ratio of around 1.3. That's likely still within Buffett's buy range, especially given Berkshire's repurchases from the first quarter. Yet if the stock stays at these levels, it's less likely that Berkshire will spend as much in the third and fourth quarters as it did in the second.

Yet that shouldn't disappoint Berkshire shareholders. For long-term investors who are confident in the success of the famous value investor's strategic vision, Warren Buffett  keeping cash available for potential big business purchases will likely be even more lucrative than further buybacks would be.