Please ensure Javascript is enabled for purposes of website accessibility
Log In Help Join The Motley Fool
Free Article Join Over 1 Million Premium Members And Get More In-Depth Stock Guidance and Research
By Luis Sanchez CFA - Aug 12, 2020 at 8:42AM

The music industry is poised to continue its comeback, this time in the public market.

Warner Music Group (WMG -9.43%) is home to some of the most iconic record labels, including Atlantic Records, Warner Records, and Parlophone Records, featuring recording artists such as Ed Sheeran, Bruno Mars, and Cardi B.

The company made a bold decision this year to go forward with an initial public offering (IPO) in the midst of the COVID-19 pandemic. The IPO was successful, and the deal raised approximately $2 billion at $25 per share. Some investors have speculated that Warner's decision to IPO this year had something to do with its rival, Universal Music Group (UMG), selling 10% of its company to Tencent Music Entertainment.

In reality, this may have been the perfect time for Warner Music to go public. The company has seen strong growth with the rise of music streaming and has even been able to report a profit.

Technology driving a resurgence in the music industry

Ever since Napster disrupted the music industry, much of the investment community had left the industry for dead. However, music labels have learned to adopt new technology, and now, with the rise of streaming revenue, it is back on a course for growth and profitability. 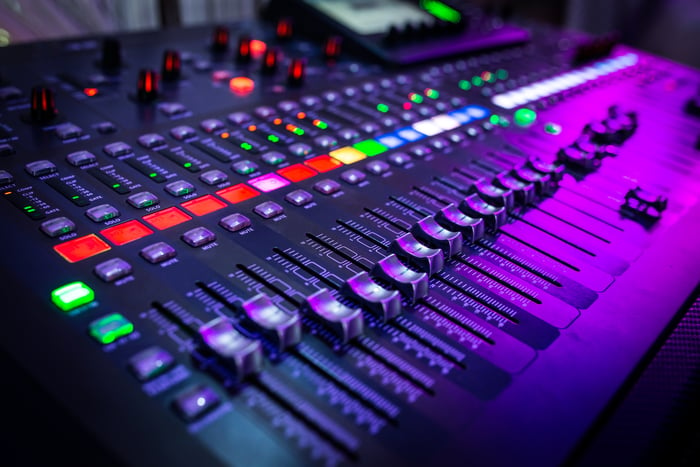 From 2015 to 2019, the entire music industry grew sales at a 9% rate, culminating in industry-wide revenue of $20.2 billion in 2019. The industry generated $5.6 billion of revenue from music publishing in 2019, representing 2% growth over the prior year. Record labels make more money from recorded music, because they have more control over the artist and can extract better economic terms.

Warner Music is the rights-holder of all music released on its label, and the company pays royalties to artists when their music is streamed online, bought digitally or physically, or used in films or commercials. Each revenue stream is growing, primarily due to the increased penetration of digital distribution. As more people stream music on services such as Spotify, Warner Music gets paid more in royalties.

Today, digital music represents 64% of recorded music and 42% of music publishing revenue. The mix of digital has increased steadily as streaming revenue has grown at a 42% compound average growth rate over the last four years. Although the current penetration rate for digital music is healthy, expect it to be an even greater slice of the pie in coming years.

As the table shows, Warner Music has grown its revenue at a double-digit rate in recent years as the company positioned itself to emphasize genres that have the greatest commercial and streaming appeal, such as hip hop and pop. Streaming is playing an increasingly important role in how Warner selects and develops artists. For example, the massive success of Lil Nas X's "Old Town Road" was partly due to the song's short length, which forced fans to play the song over and over again, racking up the royalty payments for the artist.

An opportunity of future growth will be Warner Music's expansion into global niche markets. The company has laid out a plan to open additional offices in new developing countries where it can position itself as a leading record label in geographies that other labels have overlooked. Specifically, Warner Music has called out China, Indonesia, Poland, Russia, and South Africa as markets where it sees a strong opportunity to grow.

Becoming noticed in the music industry has become easier than ever. The ability to get your music out in front of the public is just one click away, and Warner Music has capitalized on its ability to sign top musicians and make their music financially viable.

Welcome to the machine

As legendary rock group Pink Floyd said, welcome to the machine. There is no denying that technology has made music more profitable. Consumers have more tracks and artists to choose from than ever before, and music consumption has risen to an all-time high, which has allowed Warner to benefit from the growth of the music industry.

As music mediums have transitioned from warm vinyl records to non-static CDs and now compressed audio files on smartphones, Warner Music will continue to evolve its business and remain a top record label.