Please ensure Javascript is enabled for purposes of website accessibility
Log In Help Join The Motley Fool
Free Article Join Over 1 Million Premium Members And Get More In-Depth Stock Guidance and Research
By Anders Bylund – Aug 13, 2020 at 11:22AM

The networking veteran's fourth-quarter earnings report beat the Street, but management's guidance for the next reporting period left investors cold.

Cisco's fourth-quarter revenue fell 9% year over year to $12.2 billion. Adjusted earnings slid 4% lower, landing at $0.80 per diluted share. The analyst consensus had called for earnings near $0.74 per share on sales of roughly $12.1 billion, so Cisco cleared those bars with some room to spare.

The first-quarter guidance targets were less impressive. Sales are expected to fall by approximately 10% again, stopping in the neighborhood of $11.9 billion. Adjusted earnings were projected to be approximately $0.70 per share, down from $0.84 per share in the year-ago period. Here, your average analyst had been looking for earnings near $0.76 per share on roughly $12.2 billion in top-line sales. 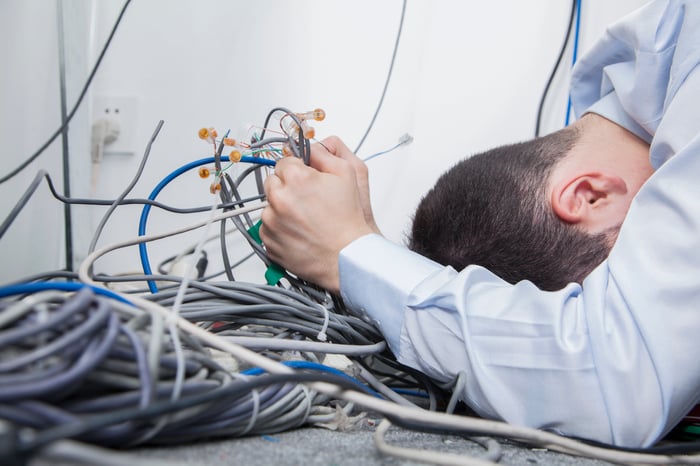 Cisco achieved a couple of long-term goals in fiscal year 2020. More than half of the company's total sales came from software and services this year, reducing the importance of lower-margin hardware sales. And 78% of Cisco's software revenues were collected in the form of subscription deals, exceeding a management target of 66%. The company is modernizing its business model with an eye on higher-margin operations and more predictable revenue streams.

That being said, the first-quarter guidance targets came in low due to COVID-19 impacts on top of a difficult comparison against the year-ago period's unusually strong results.

"So comparing to Q1 of '20 right now, we still have some tougher compares. But they do get easier as the year goes on, assuming that the pandemic ends," CFO Kelly Kramer said in Cisco's fourth-quarter earnings call. "We forecast based on what we see, based on the order rates, and we feel this is a pretty accurate guide."

Kramer also chose this moment to retire from her CFO role, capping an eight-year tenure. Cisco won't be left without a financial leader, though. Kramer will stay until the company has found a suitable replacement and will also get her successor up to speed before stepping away.