Please ensure Javascript is enabled for purposes of website accessibility
Log In Help Join The Motley Fool
Free Article Join Over 1 Million Premium Members And Get More In-Depth Stock Guidance and Research
By Reuben Gregg Brewer - Aug 15, 2020 at 6:10AM

It's really one core tip with three important variations on the theme. But that's what makes this simple fact so important to understand.

Dividends are a wonderful thing, allowing investors to either use the cash to pay for daily living expenses, or put that money back to work via reinvestment. Either way, dividends are a big win for investors. But there's more to a dividend than just this, because you can use a company's dividend yield to help guide your investment approach. Here are three dividend tips, based on that core foundation, that can earn you thousands.

Valuation is important in the investing world. Pay too much for even a great company and it can very quickly turn into a bad investment. That's one of the core underpinnings of value investing. The extreme value case is buying what some have called cigar butt companies, which are down and out but so cheap that there's still some value to be had. That's not the right approach for most investors. The better option, particularly for conservative types, is to find well-run companies and wait until they trade at an attractive price -- a tactic laid out in the iconic book The Intelligent Investors by Benjamin Graham, the man who helped train Warren Buffett. 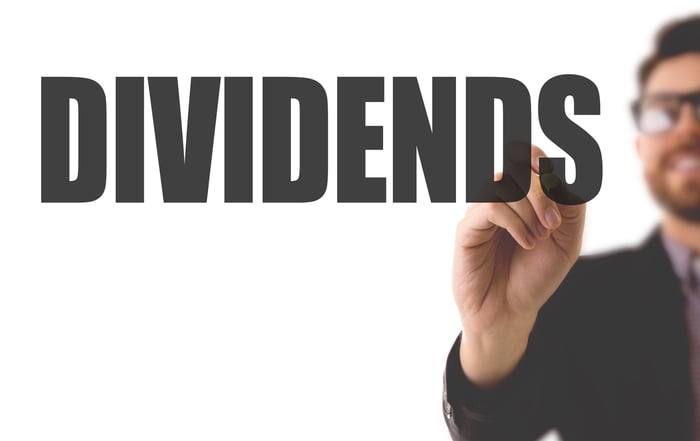 Often investors will be told to create long-term cash flow projections to arrive at the true underlying value of a company. Buy below that price, with perhaps a little cushion added for safety, and you can be fairly confident that you are getting a good deal. That's a great idea, but it involves a lot of guesswork (nobody on Wall Street has a crystal ball) and a lot of time and effort. It's impractical for more than a few stocks at a time. A shortcut is to simply focus on ratio analysis, using tools like the price-to-earnings ratio. This allows you to look at a lot of companies in a short period of time so you can focus in on the names that pass your first-cut valuation screen.

But if you love dividends, there's another option that will sit right in your wheelhouse: dividend yield. Dividend yields go up and down as the price of a stock rises and falls over time. Generally speaking, the yield will hover around where investors, as a group, think it is reasonable compared to the risks and potential of the business backing the payment. In other words, just like P/E, you can use dividend yield as a valuation tool. That's the core of this highly valuable tip, but there's more to the story than just that.

1. Yield relative to the market

The first thing you'll want to consider as a dividend investor is the yield you can get relative to the broader stock market, using a comparison like the S&P 500 Index. This provides a gauge for thinking about dividends in general. If the yield on the S&P 500 is around 1.8%, as it is today, then a company with a yield of 3% is actually offering a pretty generous dividend compared to the market. It might be worth a closer look, even if your ideal target is higher. But the spread between the two yields is even more telling, with a widening difference hinting at a name that's out of favor. 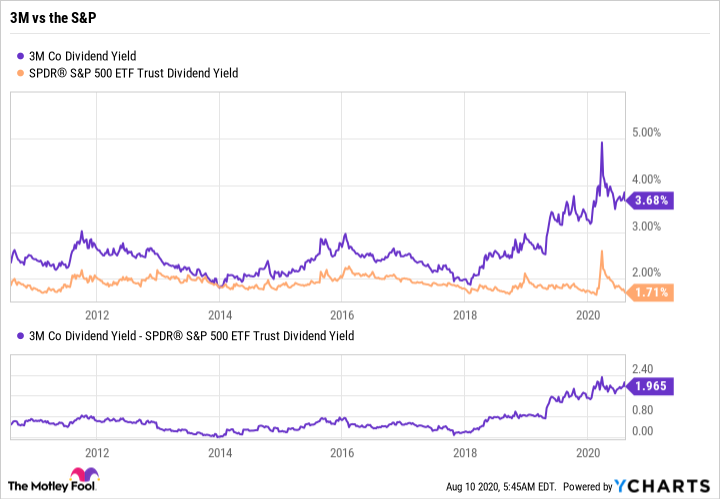 Industrial giant 3M (MMM -0.51%) is an excellent example right now. As the chart above shows, the spread between 3M's yield and that of the S&P 500 Index, using SPDR S&P 500 ETF as a proxy, has really widened out. Investors are clearly downbeat on 3M, and that could make it worth a closer look. You can still use this tip for stocks that typically have low yields, but you'll be looking for the spread between the stock's yield and that of the S&P 500 Index narrowing.

That said, entire sectors often go in and out of favor together. So you'll also want to look at a company relative to the sector in which it operates. In the case of 3M, that's the industrial sector, and using Vanguard Industrials ETF as a proxy you can see that the company looks attractive here as well. 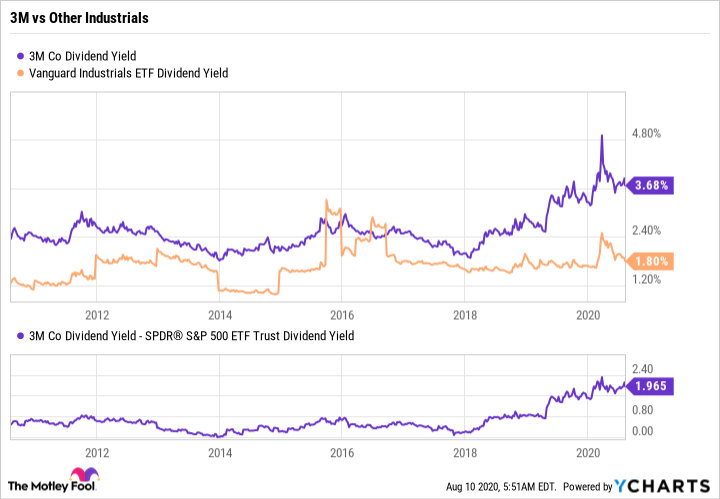 Indeed, as the chart above shows, 3M's yield is also high relative to the broader industrial space. This is a big picture look, which may be more than enough in many cases. However, you might also want to pull out a few of the company's more direct peers as well. For example, industrial giants Honeywell and Emerson Electric both have notably lower yields than 3M. Thus, 3M still looks relatively attractive yield wise.

3. Yield relative to the company's own history

This brings up one last issue -- how does the current yield compare to the historical trends for the company you are examining? For example, a yield of 3% for a company that has long yielded 6% may not present a great long-term buying opportunity for value-conscious investors. But that same yield for a company with a history of offering, say, a 2% yield is a different story. 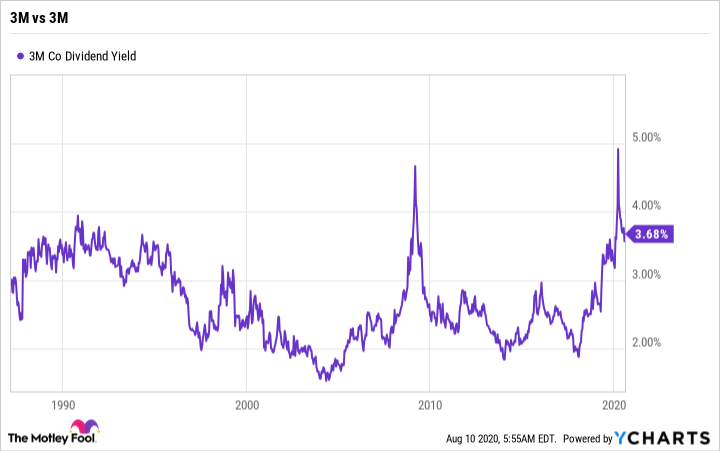 As this chart shows, 3M's current yield is toward the high end of its historical range. In fact, the last time it was this high was during the 2007 to 2009 recession. Notably, the U.S. fell into a recession in February, so that makes a fair bit of sense. The key takeaway, though, is that 3M looks cheap compared to its own yield history today.

Don't run out and buy 3M at this point. What you've done is identify it as an interesting investment candidate because of its generous yield relative to the market, its peers, and its own history. You need to get to know the company a little bit more before you pull the trigger. But with one simple tool, and three tips based on variations of the same theme, you have quickly figured out that a deep dive is likely to be worth the extra effort. And, at the same time, you've proven that a company's dividend yield can be a powerful investment tool if you know how to use it.