These companies could crush the market and elevate your portfolio.

Small-cap stocks have also historically outperformed large-caps as the economy has emerged from a recession, and building a portfolio of high-quality small-cap stocks during the current downturn could be a path to huge returns. With those points in mind, here's why investors seeking stocks capable of delivering explosive gains should add Glu Mobile (GLUU), Impinj (PI -2.26%), and PROS Holdings (PRO -3.57%) to their portfolios. 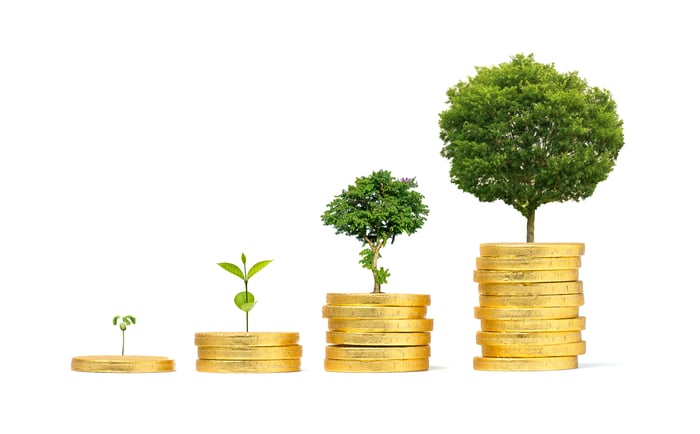 Glu Mobile is a video game company with a market capitalization of roughly $1.3 billion, and I think there's a good chance its valuation can triple over the next five years. The company's explosive potential looks even better following a steep stock decline after the publication of second-quarter results that were actually pretty good on most fronts.

Sales for the period did miss the market's target by a significant margin, and the company posted an adjusted loss per share of $0.05 when the average analyst target was guiding for adjusted per-share earnings of $0.03. But bookings (arguably a more telling metric because they include sales made to consumers in the quarter that have been deferred on the books due to accounting standards) came in ahead of the company's own targets and the market's expectations.

Bookings climbed nearly 80% year over year in the quarter to reach $182 million, and the earnings miss was mostly down to more revenue being deferred and increased spending on user acquisition and game development. Glu's lineup of core game franchises continues to look pretty sturdy, and there's room for big growth as the company debuts new titles, taps potential acquisition targets, and branches into new product categories.

Notably, Glu Mobile's CrowdStar studio (which is responsible for hit games including Design Home and Covet Fashion) has a new title set for release in the not-too-distant future.

The company is also developing an interactive storytelling platform and has an e-commerce service that's on track to launch in the fourth quarter. With its small market cap and stable of franchises that are already putting up solid performance, success for just one of its upcoming projects could make Glu a huge winner.

Impinj is a maker of radio-frequency-identification (RFID) tags and sensors that's valued at roughly $600 million and has huge room for growth. The company specializes in RFID chips that transmit signals without the need for a power supply, allowing these tags to be small, durable, and capable of being discreetly attached to items that fall outside the sphere of traditional tech devices.

Impinj's RFID tags allow items including clothing, packages, and mechanical tools to send data to networks. Data transmitted from these objects can dramatically improve the speed and efficiency of inventory management, provide other enhancements to business supply chains, and help cut down on theft.

The market balked after the company's sales fell nearly 31% year over year in the second quarter due to coronavirus-related store closures in retail -- currently its biggest market. Big headwinds in the retail sector are dampening Impinj's near-term outlook, but investors who are willing to look past the challenges and focus on potential emerging applications could be richly rewarded.

As just one example of a use case that could spur demand for RFID tags and sensors, reports suggest that vials and syringes used to administer vaccines for the coronavirus could be fitted with the tech in order to track distribution and record when and where vaccinations occurred. Whether or not Impinj will get a boost from coronavirus-related uses is unclear, but there's a good chance that the RFID tech it provides will see a wide range of new applications in the coming years, turning potentially underappreciated growth markets into gold mines.

PROS provides artificial-intelligence powered software that helps digital businesses price and showcase their products and services in order to maximize sales. The company's share price has slumped roughly 40% year to date, and it now has a market cap of roughly $1.6 billion.

Dynamic pricing services can help businesses perform better against competitors, and PROS could enjoy sustained tailwinds as online retail and other digital-facing businesses continue to account for a growing share of the global economy. The company's services are flexible across different geographic segments and industries and are used by both business-to-consumer and business-to-business companies.

PROS already counts large enterprises including Citgo, Southwest Airlines, Merck, Nestle, and Adobe Systems among its customer base, and it should have plenty of opportunity to continue expanding despite what its recent stock performance might suggest. Those declines for the company's share price are partly explained by the challenging growth environment at hand. Uncertainty created by the coronavirus pandemic has resulted in many businesses holding off on pursuing major new growth spending and installing new software systems.

These conditions have halted PROS' sales growth, with revenue in the second quarter coming in flat versus the prior-year period. But subscription revenue climbed 21% year over year to reach $42.4 million last quarter, and the business still has plenty of room for growth as it lands new enterprise customers and sells added services to the companies using its platform.