Before the pandemic, Disney (NYSE:DIS) theme parks were prospering, and streaming services such as Disney+ were experiencing massive subscriber gains.

However, the shutdowns have dramatically reduced revenue and left the company playing defense. The stock has risen over 25% in the past three months despite these conditions. Still, simply reopening the theme parks does not mean visitors will come flocking back, and with no clarity on when all parts of the business can resume their full operations, investors might begin to wonder if the stock is due for another coronavirus-related sell-off.

Initial effects of the pandemic

COVID-19 struck at the heart of two of Disney's divisions. First, the parks, experiences, and products segment saw all theme parks and cruises shut down when the world went into lockdown. This happened first with Shanghai Disney and Hong Kong Disneyland in January. By mid-March, it affected all parks. The company also canceled its cruises at around the same time. As a result, revenue in this segment fell 85% year over year in the fiscal third quarter.

Another division, studio entertainment, saw its business nosedive as well. With few movie theaters open, the company did not have theatrical releases to generate receipts, and revenue fell 55% in the latest quarter.

This led to several moves from management to preserve liquidity. The company issued $6 billion in new long-term debt during the quarter, as well as an additional $925 million after the quarter ended. Disney also closed on a $5 billion, 364-day credit facility.

To the surprise of many shareholders, Disney even suspended its dividend for at least the first half of the year. That move saves Disney about $1.6 billion. At an annual payout of $1.76 per share, the dividend is likely to exceed full-year earnings for this fiscal year, which analysts estimate at $1.60 per share. 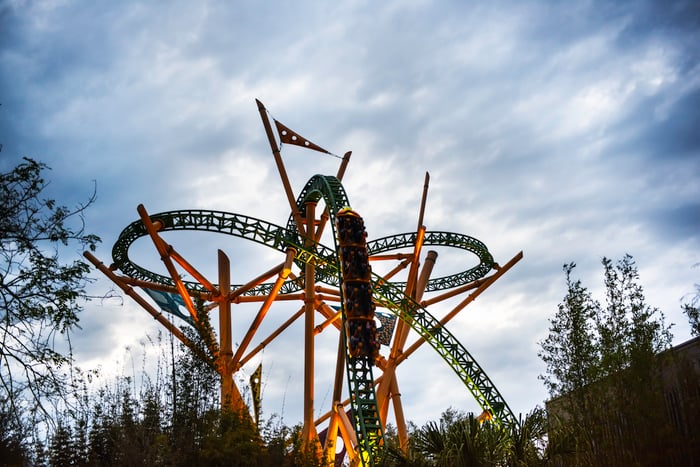 Streaming, part of the direct-to-consumer and international segment, became the silver lining for Disney during the lockdowns. Customers flocked to the new Disney+ streaming service, taking its subscription numbers to 57.5 million by the end of the fiscal third quarter. ESPN+ also saw its subscriber numbers more than triple from year-ago levels despite a lack of live sports.

However, even with such robust subscriber growth, overall revenue fell 42% year over year during the quarter, and earnings per share was down 94%.

Nonetheless, Disney stock has fared much better than third-quarter earnings might indicate. Year to date, the stock has lost about 10% of its value. Like most companies, Disney stock saw a massive sell-off in February and March before steadily recovering. This months-long rally has taken the price-to-earnings valuation to approximately 44.

Unfortunately, this recovery may dampen the appeal of Disney stock in the near term. For all of the talk about Disney+, theme parks and the box office remain important cash cows that made up over half of the top line in fiscal 2019.

Early attempts to reopen theme parks have shown that the segment will need months (if not longer) to bounce back so long as COVID-19 weighs on consumers' minds. Disney Cruise Line has repeatedly delayed its relaunch, this time through Oct. 31 at the earliest. Additionally, movie theaters are still forgoing major movie debuts. Instead of a theatrical release, Disney will release its potential blockbuster Mulan on Disney+ in September for an additional fee.

The COVID-19 crisis might not undermine the long-term case for Disney stock. At some point, society will learn to manage the disease, and customer demand for travel and entertainment will return. However, investors have already priced that return to normal into the stock, given its shrinking year-to-date losses. This rally is happening at a time when Disney cannot commit to any reopening dates, and with so much uncertainty, prospective investors may balk at paying nearly 50 times earnings (or triple digits if looking at forward earnings estimates).

The company will have no problem staying afloat during the pandemic, but until large swaths of its business can resume their normal operations, investors should stay on the sidelines.