Please ensure Javascript is enabled for purposes of website accessibility
Log In Help Join The Motley Fool
Free Article Join Over 1 Million Premium Members And Get More In-Depth Stock Guidance and Research
By Adam Levine-Weinberg – Aug 15, 2020 at 9:22AM

In this context, the Macy's Backstage off-price concept has been one of the few bright spots for the company. Backstage has been a consistent source of in-store sales growth for Macy's, and the concept has produced solid (and improving) margins. As a result, Macy's recently opened nearly a dozen new Backstage store-within-a-store locations, even in the face of diminished store traffic due to the COVID-19 pandemic.

Backstage is a source of strength

As of late 2019, Macy's operated 215 Backstage sections within full-line Macy's stores, along with a handful of freestanding locations. At its investor day in February, the company disclosed that Backstage stores-within-stores that had been open for more than a year posted 5% comparable-sales growth in fiscal 2019. Management said that the lift from these Backstage sections -- and the traffic they drive to other departments -- boosted comp sales by 2% for stores with Backstage outlets.

The COVID-19 pandemic threatened this important cog in Macy's turnaround strategy. After all, while Macy's has a strong e-commerce business that accounted for about 25% of the company's revenue last year, Backstage -- like most off-price retailers -- doesn't sell online. 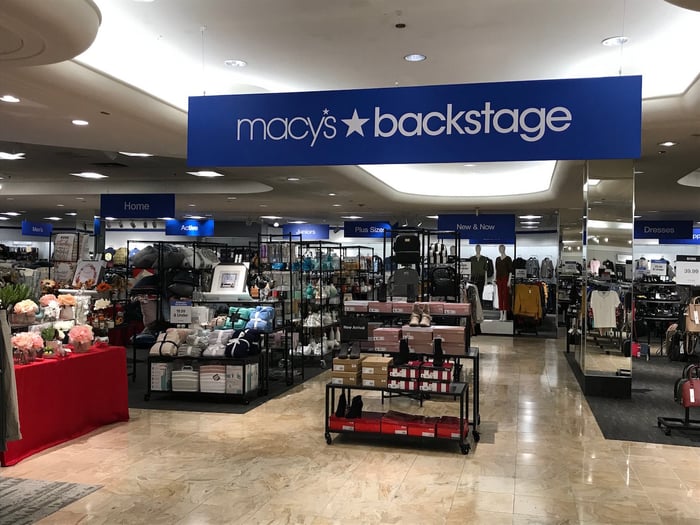 Fortunately, Backstage bounced back quickly as soon as Macy's was able to reopen its stores. In early June, Macy's executives said that full-line stores were reopening with sales volumes about 50% of 2019 levels and that Backstage was (as usual) outperforming the traditional full-line business.

Entering this year, Macy's planned to open about 50 new Backstage store-within-a-store locations and seven additional freestanding Backstage stores during 2020. Construction delays and capital expenditure cuts due to the pandemic have put these targets out of reach, but Macy's didn't abandon its growth ambitions for the Backstage concept, either.

Last weekend, Macy's opened 11 new Backstage stores-within-stores. The majority of these new locations are in the Northeast, with three new stores in New York and one each in Connecticut, Maryland, Massachusetts, and New Jersey. Macy's also opened three Backstage locations in California and one in Texas. The company says three more new Backstage stores-within-stores are coming soon, two in California and one in Florida.

Most of these 14 new Backstage locations are in stores that perform well but are not in top-tier malls. These are stores that Macy's was unlikely to close but could use the sales lift that adding Backstage typically provides. Several top-tier locations are also getting Backstage in this round of store openings -- most notably, Westfield Garden State Plaza in the New York City suburbs. This shows that while Backstage was initially designed to bolster sales at struggling stores, Macy's management now sees it as a universally applicable sales driver.

The decision to open Backstage locations in malls like the Poughkeepsie Galleria suggests that Macy's hasn't radically changed its store strategy due to the pandemic. If the company planned to dramatically shrink its store base in the next few years -- beyond the nearly 100 closures left under the three-year plan announced in February -- it wouldn't be investing in locations like this one.

Bargain hunting is likely to be an even bigger shopping trend in the next few years than it has been over the past decade. That will make Backstage an even more important weapon for Macy's going forward. As its cash flow starts to recover from the pandemic, Macy's is likely to double down on off-price by accelerating its expansion of the Backstage chain.