Please ensure Javascript is enabled for purposes of website accessibility
Log In Help Join The Motley Fool
Free Article Join Over 1 Million Premium Members And Get More In-Depth Stock Guidance and Research
By Rick Munarriz – Aug 16, 2020 at 10:00AM

They have different takes on what "food with integrity" means, but these two stocks are both doing right by their shareholders.

Chipotle Mexican Grill (CMG 2.09%) and Beyond Meat (BYND 9.50%) are as close as you can probably get to companies that have their own mantras. Chipotle's been waving the "food with integrity" banner for ages. Dive into the first line of Beyond Meat's mission statement, meanwhile, and the connection is obvious:

We believe there is a better way to feed our future and that the positive choices we all make, no matter how small, can have a great impact on our personal health and the health of our planet.

The two companies take divergent paths after that. Beyond Meat is all about shifting from animal- to plant-based proteins. Chipotle's altruism is more about the way its ingredients are raised or sourced. However, the two players converge again when it comes to the realization that having a grander purpose in feeding folks well can also do right by shareholders.

Chipotle and Beyond Meat have been big winners on Wall Street, but let's take a closer look at the two stocks to see which one is the better investment at this point. 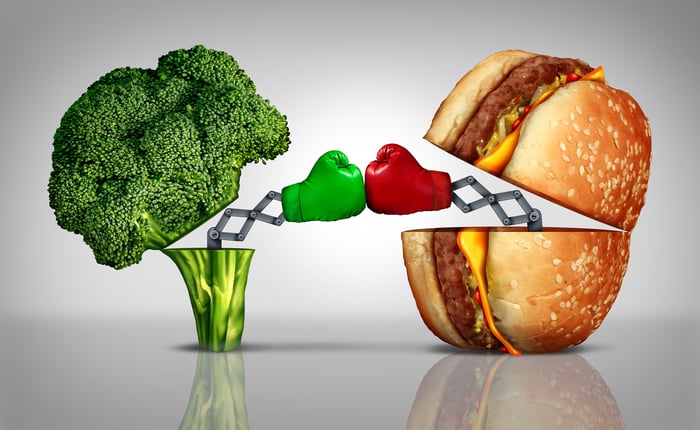 Beyond beating the market

Chipotle is a popular fast-casual dining chain. Beyond Meat is a provider of plant-based meat proxies for restaurants, but the lion's share of its revenue is generated at the retail level for supermarket shoppers to work Beyond Meat's product lines into their meatless recipes.

When it comes to growth, it's hard to match the top speed at Beyond Meat. Net revenue accelerated from 170% in 2018 -- the year before it went public -- to a blistering 239% last year. Beyond Meat's top line slowed to 141% in this year's first quarter and 69% in its latest financial outing, but the dramatic slowdown is solely the handiwork of the pandemic.

The 69% increase in net revenue for the second quarter is a tale of two businesses. Many of its restaurant partners worldwide were either closed or limited to takeout and seating restrictions for the months of April, May, and June. Beyond Meat experienced a 61% plunge in U.S. foodservice revenue, with a similar 57% plunge in that category internationally. It was a different story on the retail front that accounted for 88% of the revenue mix in this highly unique quarter. Beyond Meat saw its retail revenue soar 195% in the U.S. and 167% everywhere else.

Profitability has been spotty even on an adjusted basis. Beyond Meat isn't a bottom-line story right now, but it was turning that corner with healthy momentum before the COVID-19 snap. It's hard not to like Beyond Meat's runway. Consumers are embracing vegetarian lifestyles. Beyond Meat and rival Impossible Foods are making plant-based proteins so similar to the animal-based meats that they're gaining ground even with diehard carnivores.

A chip off the old Chipotle

Chipotle Mexican Grill isn't growing anywhere close to the pace that Beyond Meat is clocking in at these days, but to its comparable credit, the 5% decline it posted in second-quarter revenue was a lot better than Beyond Meat's 61% plummet in U.S. retail sales for the same period. The burrito roller has been one of the restaurant industry's better performers through the pandemic.

Chipotle's latest quarter did put an end to nine consecutive quarters of positive comparable-store sales growth, but a 5% decline isn't too shabby in the new normal. Chipotle has been able to step up its digital game and play nicer with third-party delivery apps. Even the shift to add drive-thru Chipotlanes in newer locations since last year is paying dividends now.

The chain has grown up in a hurry. Digital sales more than tripled in the second quarter, up 216%, and accounted for 61% of the sales mix for the period. Comps also turned positive for the month of June, a freakishly good development when we're talking about improving store-level performance relative to June of last year when there were no coronavirus concerns.

Chipotle was also profitable in the second quarter. It has consistently landed ahead of Wall Street's earnings forecasts over the past year.

Beyond Meat and Chipotle are winners. Beyond Meat is a five-bagger since last year's IPO. Chipotle has been a market darling since going public 14 years ago. Neither stock is cheap right now, but that has always been the case. They have earned their market premiums with strong brands and stellar growth. They both have the right ingredients to continue beating the market in the near term, but the edge has to go to Chipotle given its more reasonable valuation and its success in weathering the restaurant apocalypse that is sending so many lesser chains out of business.

Rick Munarriz has no position in any of the stocks mentioned. The Motley Fool owns shares of and recommends Beyond Meat, Inc. and Chipotle Mexican Grill. The Motley Fool has a disclosure policy.