What happens when a pandemic disrupts an industry disruptor?

The first six months of 2020 have visibly transformed Beyond Meat's (BYND -7.33%) approach to marketing its plant-based, meat substitute products. The company's second-quarter 2020 earnings report, released Tuesday after the markets closed, revealed that it's still experiencing rampant growth. Total revenue jumped by 69% against the prior-year quarter to $113.3 million. And the organization continues to spill a slight amount of red ink, generating a loss of $10.2 million over the last three months versus a loss of $9.4 million in the second quarter of 2019.

But beneath these numbers, the dynamics of Beyond Meat's business model have been radically altered by its response to the COVID-19 pandemic. In the second quarter, U.S. retail sales (mostly through grocery channels) almost tripled to $90 million, while foodservice sales in the U.S. plunged by 61% to $6.5 million.

Part of this shift happened without much intervention by management, as consumption in restaurants and other institutional foodservice outlets has plummeted since the spring, while at-home consumption has soared.

Yet Beyond Meat's management made a critical decision during the second quarter to change course on product distribution. To illustrate, the company repackaged a portion of its slow-moving food service inventory for retail consumption. This wasn't a cheap decision -- Beyond Meat incurred a charge of nearly $6 million to repack and reroute this inventory in response to consumer demand. But for a young organization that wants to leapfrog rivals in gaining plant-based mindshare, the shift isn't illogical, and it may result in a durable competitive advantage. 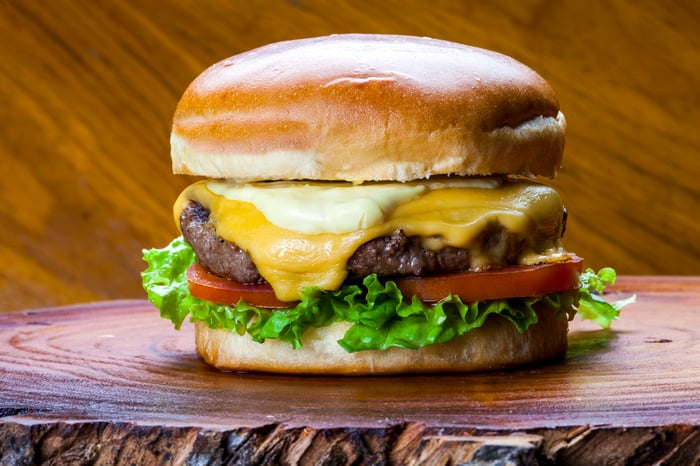 Before the advent of the COVID-19 pandemic, Beyond Meat's "go-to-market" strategy -- its plan for marketing and promoting its brand, coupled with its framework for product distribution -- relied heavily on foodservice penetration. Placing its hamburgers and breakfast proteins in major quick-service restaurant chains was a logical approach to igniting brand awareness. A year ago, the consumer discretionary upstart's top line reflected the depth of its marketing and supply chain investment in the restaurant business: These sales were nearly identical to their retail counterpart:

The following table, covering Q2 2020, shows how drastically this dynamic has changed, as management has leaned into winning customers at the grocery shelf during a near-cessation in dining-out activities:

Beyond Meat is now incentivizing potential retail customers to try its products via a limited-time offering it dubs the "Cookout Classic" burger value pack. According to the company, this package of 10 plant-based patties reduces the price of its burgers from nearly twice that of conventional burgers to a 20% premium. It's unfortunately difficult for investors to gauge the impact of this promotion on profits, since Beyond Meat books the discount as a reduction in sales to arrive at net revenue, rather than a reduction in gross profit margin.

Nonetheless, Beyond Meat's earnings press release observed that the value packs, which hit grocery stores only in the last two weeks of the quarter, were responsible for 16 percentage points of volume growth for the entire period. This indicates an extremely successful uptake by consumers.

The emphasis on the grocery channel will now almost certainly evolve into a long-term focal point for Beyond Meat. Rising beef prices, coupled with the overwhelming at-home food consumption trend, present an unforeseen opportunity for the company to entice new customers by doubling down on grocery sales.

This pivot on management's part is undergirded by a continuing commitment to building out manufacturing and distribution capacity -- even in the middle of a pandemic, Beyond Meat more than tripled its capital expenditures in the second quarter against the prior year, to $26 million.

Investors should note that maximizing customer acquisition through the retail channel will probably crimp the company's admirable growth rate, as future promotions and new iterations of discounted value packs will reduce the amount of recorded sales (net revenue), as we've discussed above. But at this stage of Beyond Meat's growth, converting new customers remains the utmost priority. Management's flexibility and willingness to alter the company's go-to-market strategy during the era of COVID-19 has the potential to pay off handsomely over a multiyear horizon.