The retail giant has a 46-year history of paying dividends, but it might not be the best dividend stock for everyone.

Holding shares of a company that issues a rising stream of dividend payments can have a big impact on your returns. A $10,000 investment in Walmart (WMT -0.10%) stock in 1990 would be worth $175,000 today. But dividend reinvestment would have added nearly $100,000 more to your returns.

Walmart has been paying and growing its dividend since 1974, which should make the stock a worthy candidate for any income investor. The company is uniquely positioned to withstand rough economic patches, such as the one we're in now related to COVID-19.

We'll review how Walmart has fared during the pandemic before dissecting its recent dividend history to help investors determine if this is the right dividend stock for their nest egg. 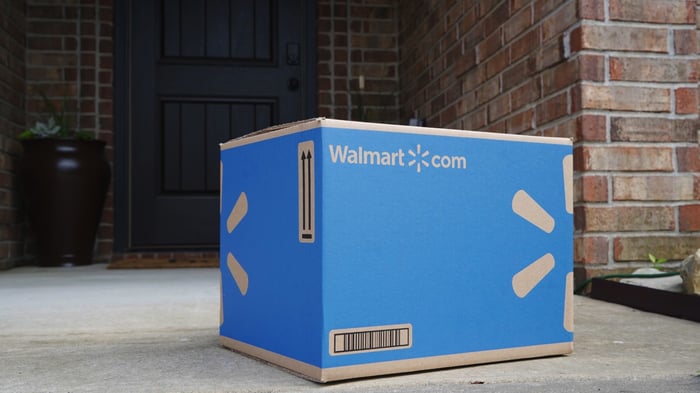 Millions of people shop at Walmart every year, which makes the retail giant a financial fortress. Over the last year, Walmart generated more than $500 billion in sales and earned $15 billion in profits.

Walmart does have a lot of debt on its balance sheet. For some companies, that can be a threat to future dividend increases, especially if a severe recession hurts revenue performance. But Walmart can get away with its $54 billion debt load because of the consistent volume of purchases people make at its stores, even during recessions. During the previous economic downturn in 2008, Walmart's sales growth didn't miss a beat, improving from $344.8 billion in fiscal 2007 to $401.1 billion in fiscal 2009.

The current pandemic has put the economy in uncharted territory, but so far, Walmart is rising to the occasion. U.S. comparable sales in its fiscal first quarter accelerated to 10%, and e-commerce sales surged 74% year over year. That performance was driven by a spike in demand for everything from paper goods to exercise equipment as people prepared for extended time at home. The demand was so strong that Walmart hired tens of thousands of new associates.

Investors like what they see. The stock is up almost 12% year to date, outperforming the S&P 500's 4.4% return at the time of this writing.

But Walmart's dividend growth is slowing

Since Walmart initiated the first quarterly dividend in 1974, it has increased the payout every year. That multi-decade streak makes Walmart a Dividend Aristocrat.

However, investors should know about a few negatives in Walmart's dividend history. One is that the pace of the dividend increases has slowed significantly over the last five years. In the last decade, Walmart's quarterly dividend doubled, but the payout has only increased 10% since 2015.

One reason for this is the slowing growth in net income and free cash flow. Walmart's profits were steadily climbing through 2010, fueling a proportional rise in the payout. But Walmart has had to distribute an increasing percentage of its annual profits, known as the payout ratio, in recent years to maintain its dividend growth. 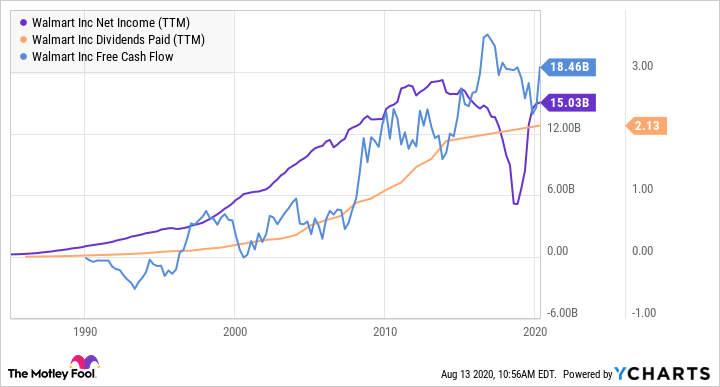 Walmart's payout ratio has risen from less than 30% in 2010 to more than 40% in the past few years. The current payout ratio is about on par with that of other blue chip stocks and provides Walmart some headroom to continue increasing the dividend. But unless Walmart can grow its net income and free cash flow faster -- which could be difficult given the company's size and the heavy investments required to compete in the e-commerce race with Amazon.com -- future dividend increases might be slow as they have been in the last five years.

Walmart's current dividend yield is 1.6% based on a quarterly payout of $0.54 per share. This is below the S&P 500's average yield of 1.8%. Over the last five years, the average company in the index has increased its dividend by 41%, about four times faster than Walmart has.

There are better dividend growth stocks

Walmart's long history of dividend payments, its consistent profitability, and its ubiquitous presence across the United States should ensure that it maintains and gradually increases its payout over time. But if you're looking for dividend growth, there are better options out there.