The retail king has done well for itself during the pandemic, but not as well as you might expect for investors.

Few companies have done as well during the coronavirus pandemic as Walmart (WMT 0.62%). Declared an essential business, it was able to operate during the lockdown, even selling merchandise that specialty retailers were forbidden from opening to sell.

While groceries were the primary things consumers flocked to the retailer to buy, it was also still able to sell clothes, sporting goods, and other merchandise, leading first-quarter sales to rise more than 8% to $134 billion and profits to increase 4% to $4 billion. Yet Walmart's stock? Meh.

For all the massive sales gains it has made during the pandemic as online grocery sales doubled early on, Walmart's shares are up only 12% since January. Most of those gains, in fact, came in just the last month after it announced it would be launching a new membership subscription service called Walmart+, a program similar to Amazon's Amazon Prime.

That increase isn't too shabby, and it trounces the 4.4% gain of the S&P 500 index over the same period, but Amazon is up almost 72% year to date and even Costco beats Walmart with a 14% gain, despite bulk-sized goods not easily translating to e-commerce sales. 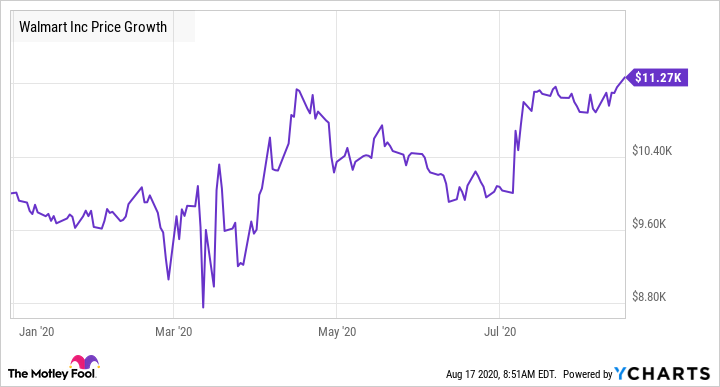 Walmart is set to post second-quarter earnings tomorrow and analysts are expecting the retailer to have benefited from consumers spending their government stimulus checks. Analysts forecast same-store sales to rise 5% for the period, so the retailer could offset the slack of the first quarter.

If an investor had put $10,000 into Walmart on Jan. 1, they would be sitting on $11,280 today. Not bad, but not the sort of money you might expect to earn from the retail giant pushing significant competitive advantages over the competition.