Live Nation (NYSE:LYV), the country's leading concert promoter, has been unplugged, if you will, in recent months. Arena concerts, bar shows, and even outdoor festivals aren't happening in the new normal, essentially drying up Live Nation's business. Revenue plummeted 98% -- yes, 98% -- in its latest quarter.

It's not easy to get a good read on Live Nation. It was a rock star as recently as last year, but will it continue to amp up gains for investors in the near future? Let's take a closer look at the good and the bad before deciding if this is a stock worth adding to your portfolio right now. 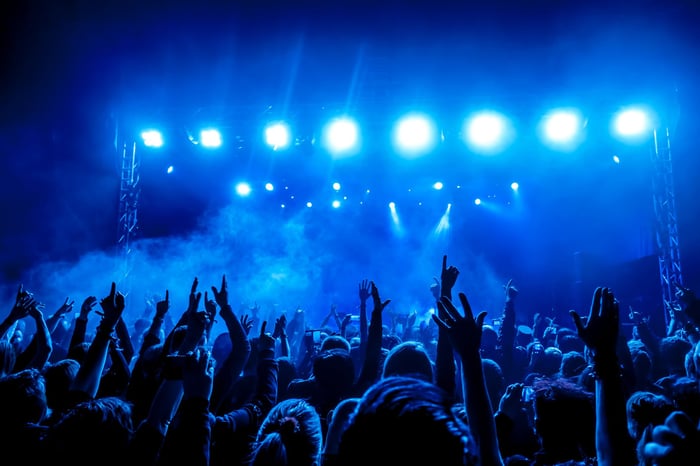 The show must go on

The good news is that the horrendous second-quarter financials that it posted earlier this month don't matter as much as you might think. It's true that Live Nation missed badly on both ends of the income statement. The $74.1 million it delivered in revenue for the quarter was woefully short of the $268.4 million that analysts were expecting. The $2.67 per share loss on the bottom line was a larger hole than the $2.08 a share that Wall Street pros were forecasting.

It doesn't matter. Everyone knew the months of April, May, and June would be brutal. The miss was largely the handiwork of analysts failing to update their models.

Another piece of good news is that folks are still clinging to their concert tickets. An encouraging 86% of folks holding tickets to rescheduled shows are going to ride it out without a refund. Fandom is strong, even in a pandemic.

Unfortunately for Live Nation, that's where the good news ends -- at least until we get back to the point where crowded stadiums are feasible. No one knows when shows will return. Even if these rescheduled shows and festivals come around next year, will social distancing force Live Nation to refund some of the uncanceled tickets anyway? Until COVID-19 has been vanquished, it's easy to see even masked concertgoers spreading the deadly virus as they sing along at the top of their lungs.

Live Nation events played out before 98 million fans last year. When do you think it will approach that number again?

The bears have started to move on. Short interest has fallen sharply since peaking in April. The stock has more than doubled -- up 132% -- since bottoming out in March. However, this doesn't mean much if Live Nation isn't filling concert halls again. Folks are still buying tickets for upcoming events, but the longer the pandemic lingers, the greater the chance that those performances will get nixed, too.

Even if COVID-19 is miraculously eradicated sooner rather than later, it's not as if Live Nation will be ready to charge the stage. The economy isn't what it used to be, and springing for costly concert tickets might not be a consumer priority in this widening recession.

Right now, it's hard to call Live Nation a buy. We know folks were still going to shows last year. Revenue rose 7% for Live Nation last year, with adjusted operating income growing twice as fast. However, there are some markets where the pandemic's impact will last. Live entertainment is one niche that will take a long time to stage a full recovery.