Please ensure Javascript is enabled for purposes of website accessibility
Log In Help Join The Motley Fool
Free Article Join Over 1 Million Premium Members And Get More In-Depth Stock Guidance and Research
By Royston Yang – Aug 19, 2020 at 9:16AM

The sports footwear and apparel giant has managed to grow its digital sales strongly during the pandemic.

The pandemic that swept across the world led to the unprecedented closure of numerous physical retail shops, and food and beverage outlets. Nike (NKE -0.99%) was no exception, as it started closing its stores in China in January when the outbreak started there and then moved to progressively shut stores across North America, Asia, and the Middle East from March through April.

These closures have had a detrimental effect on the company's top and bottom lines. For the quarter ended May 31, Nike reported a steep 38% year-over-year fall in revenue, a fall in gross margin from 45.5% to 37.3%, as well as a net loss. Full-year earnings came in 37% lower year on year, though the sports giant managed to declare a higher dividend of $0.955 versus $0.86 a year ago.

Despite this seemingly poor performance, Nike's stock price has rebounded strongly from the lows seen in late March and is even up slightly year to date. The stock continues to flirt with new all-time highs, while the company remains the talk of the town. Why has the company managed to inspire such optimism? 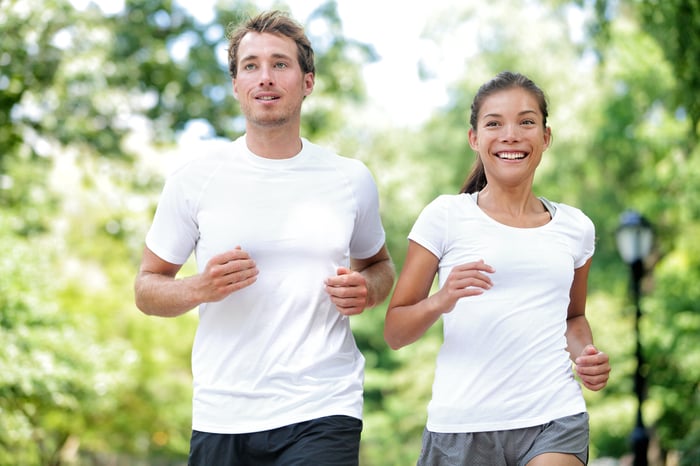 The power of digital

By late June, around 90% of Nike-owned stores are open around the world, and in greater China, nearly all of its stores have reopened. Although the company had closed the bulk of its stores in the last six months, digital sales had jumped by 75% in the fourth quarter and made up around 30% of total revenue.

John Donahoe, CEO of Nike, provided impressive numbers on Nike's digital shift in the earnings conference call. In March and April, China's monthly active users on the Nike Trending app increased over 350% since the beginning of 2020. Nike Digital grew at a stunning pace through the pandemic and surpassed $1 billion in annual digital revenue in both China and EMEA countries for the first time.

Other amazing statistics: Workouts on the Nike Training Club app have more than tripled, and since February, the Nike Commerce app has been downloaded more than 8 million times, or triple last year's level. These numbers provide solid proof of the success of Nike's digital strategy..

Nike has always been lauded for its innovative footwear. The fourth quarter saw strong demand for the Pegasus 37 and also the Air Max 2090 as the company brings in fresh new products coupled with astute marketing to support market demand. Of the top 10 best-selling sneakers so far in 2020, Nike dominated the list with seven of its products, a testament to the brand's strong appeal with consumers.

Then there's also the launch of Nike's latest iteration of the controversial Vaporfly shoes, named AlphaFlys. Independent studies found that the shoes improved an athlete's running economy by around 4% compared to competing brands by providing runners with more energy efficiency. The shoes are so popular among top athletes that some, who are sponsored by competing brands, have even resorted to wearing them in secret by blacking out the Nike "swoosh" logo.

Finally, Donahoe has articulated Nike's new and improved digital strategy, known as Consumer Direct Acceleration. This strategy involves three main pillars, the first of which is to create a marketplace that more closely aligns with what customers want and need. Nike has reached its goal of 30% digital penetration two years earlier than expected and now anticipates that it can reach 50% digital penetration soon.

The second area involves simplifying and realigning the business divisions within the company to streamline operations. Rather than categorizing products under various types of sports, e.g. running or yoga, Nike will now have just three main segments: men's, women's and kids'.

Finally, the company will continue to invest aggressively to enhance its digital capabilities and make use of technology to connect with consumers. Different areas of the business such as demand sensing and inventory management will be unified for a more lean and efficient approach.

Investors have a lot to look forward to in the coming months as Nike rolls out its comprehensive digital strategy in phases and launches new, cutting-edge products. The company continues to remain at the top of both consumers' and investors' minds as it adapts itself to the crisis and stays nimble and relevant.