The COVID-19 crisis has accelerated some trends that were already in place, especially the movement toward remote working and the use of technology in lieu of in-person interactions.

Zillow (NASDAQ:ZG) (NASDAQ:Z) has already embraced the latter trend with several of its services. In its second-quarter 2020 shareholder letter, the real estate database company describes the story of a Seattle couple who wished to leave their cramped, urban apartment and find someplace with more room. Using Zillow's tools and without leaving their current home, they were able to virtually tour the new home and secure a new rental, sign the lease, set up payment, and have their new keys placed in a lockbox.

The company hopes to extend this type of technology to Zillow Offers, its homebuying business. The Zillow Offers business involves the company buying homes directly from sellers and holding them for a period. Since many offers are contingent (i.e. the buyer needs to sell his or her existing property to be able to purchase the new one), this gives the seller certainty that the buyer will perform. If the seller is also bidding on a new home, it gives the seller a leg up on the competition, since its bid won't be contingent on selling the existing home. In a hot market, that can make a difference. For this service, Zillow charges a fee, which is really a discount to the initial offer for the property.

This isn't about buying undervalued homes, it is about scale and offering a convenience. Given that many sellers are uncomfortable with open houses, making necessary home repairs and cleaning, it's likely that many will find this service attractive. And with sellers now creating three times as many Zillow 3D Home tours as they had been in March, could this be the beginning of a wide-scale shift? Zillow thinks so. 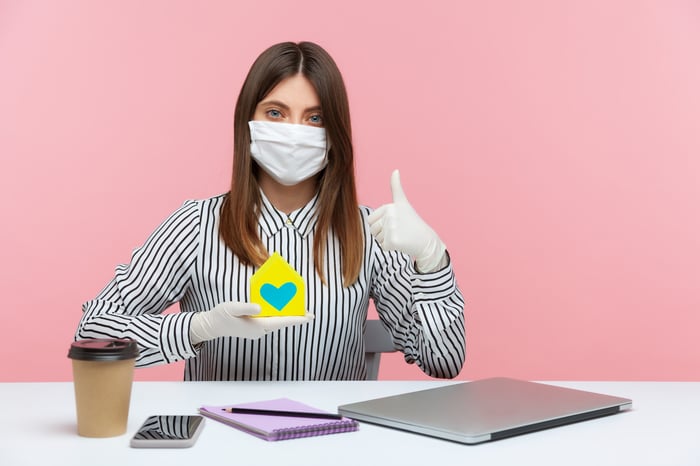 The recent months have accelerated what Zillow calls "The Great Reshuffling," where seemingly everyone is reconsidering current living arrangements and looking to move. On the second-quarter earnings conference call earlier this month, CEO Rich Barton had this to say:

I believe we are at the dawn of a great reshuffling. I'm sure I don't need to spell it out for you because we are all living it, spending an average of nine hours more per day at home. Zoom meetings are changing the way families think about space and privacy. ... It's a really popular story to tell this deurbanization story. Everybody seems to want to tell it. The real story is that shopping is up everywhere, and that's what our data says.

Zillow's second-quarter revenue came in at $768 million, up 28% year over year. The growth in revenue was primarily driven by Zillow Offers. Zillow, however, is still running at a net loss, losing $83 million, or $0.38 per share. Zillow Offers accounted for about $80 million of the loss.

After a second-quarter pause, Zillow Offers is back at full strength

During the quarter, Zillow sold 1,437 homes and purchased 86 Through the Zillow Offers program, ending the quarter with a total inventory of 440. Early in the COVID-19 crisis, Zillow suspended its purchases, which explains the big difference between homes bought and sold. Toward the end of the second quarter, Zillow began to reenter its markets, and by June 30, was back in 15 markets. As of now, it's back in all 24 markets. It is still early days in the return. Revenue guidance for Zillow Offers is down 67% at the midpoint of guidance on a year-over-year basis. The drop is due to the pause in purchases for most of the second quarter.

Zillow Offers is still in the very early stages, and the company is sticking with its forecast of the business earning between -2% and 2%. It expects near-term volatility in margins as it learns and grows. In addition, a recent study showed that Zillow Offers should increase liquidity and mobility by making it easier to move, especially for older people who are downsizing. Zillow will probably be able to sell a bunch of homes. The question is how much it will make on them.

Margins and revenue are going in different directions

Zillow Offers revenue increased 82%, and there was an increase in gross profits from 3.3% to 5.2%. That said, overall margins for the business fell from a 0.92% loss in June of 2019 to a 2.2% loss last quarter. Ultimately the question is what sort of margin improvement with size (aka operating leverage) can Zillow and its investors expect from this business.

Fee revenue and "buying right" is kind of limited by the market. Holding costs (which accounted for 1.3% of revenue) probably can't decrease as a percentage of revenue unless Zillow really cuts cycle times. Interest expense at 1.3% should scale directly with revenue. Sales and marketing are 4.3%, and there is probably some room for that to decline, although some of that is the costs of staging and marketing, which probably can't be driven down all that much.

Finally, corporate overhead should drop as a percentage of revenue. So while there is some potential margin improvement on the cost side, a good chunk of it will increase in lockstep with revenue. This also means that Zillow's margins are going to be much lower than what you would expect for a tech company.

Zillow Offers has enormous potential on the revenue side. According to the National Association of Realtors, existing-home sales reached a seasonally adjusted annual rate of 4.72 million in June. The median home price was $293,000. This works out to be a $1.4 trillion addressable market per year. Zillow probably will be able to grab a meaningful share of that. The question is whether it can do so profitably.