Please ensure Javascript is enabled for purposes of website accessibility
Log In Help Join The Motley Fool
Free Article Join Over 1 Million Premium Members And Get More In-Depth Stock Guidance and Research
By Danny Vena – Aug 20, 2020 at 10:45AM

Doubling your money in a year is a tall order. Does lightning really strike twice?

With so many stocks to choose from, the chances of finding a stock that doubles over the course of a year is pretty tough. Let's face it: There are so many variables that can impact a company -- from competition to weather and from the economy to pandemics -- that knowing how a stock will perform in a given year is essentially a crapshoot.

Investors with a background in science may recall Newton's first law of motion: An object in motion tends to stay in motion unless acted upon by an outside force. That's how it is sometimes with successful investments. Put another way, "Winners tend to keep winning."

Putting your money to work in companies that already have a solid track record of performance will help increase the likelihood of success. With that in mind, let's look at two stocks that doubled in 2019 and are well on their way to a repeat performance this year. 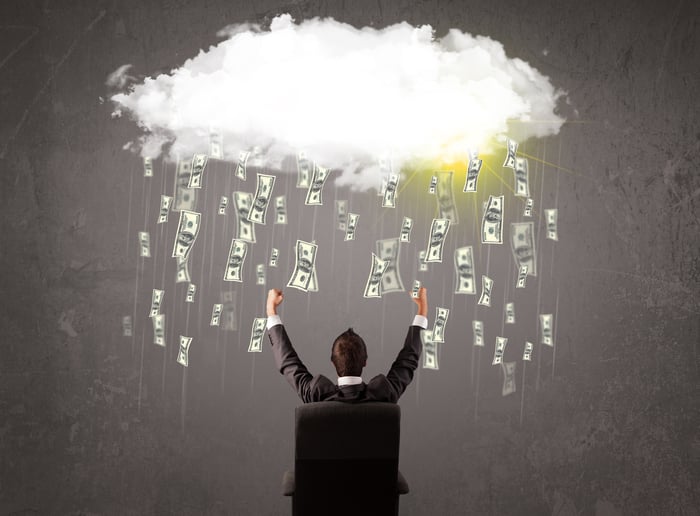 It would be impossible to talk about some of last year's biggest gainers without including Shopify (SHOP -5.86%). The e-commerce software-as-a-service (SaaS) platform has everything a merchant needs to make the jump to online sales, including tools to build a website, payment processing, shipping solutions, and inventory management. The company also integrates for sellers with brick-and-mortar retail operations, as well as providing point-of-sale systems, working capital loans, and more.

In fiscal 2019, Shopify grew revenue to $1.58 billion, up 47% year over year. What made it all the more impressive was that its growth rate was down only slightly from the 59% revenue gains it delivered in 2018. Shopify generated gross merchandise volume (GMV) of more than $61 billion, an increase of 49% year over year.

The company also helped drive excitement last year with the introduction of the Shopify Fulfillment Network and its acquisition of 6 River Systems, a leading provider of collaborative warehouse fulfillment solutions.

These moves helped set the stage for another impressive performance by Shopify in 2020, but no one could have foreseen the onset of a worldwide pandemic and its impact on the adoption of e-commerce. With consumers reluctant to venture outdoors for fear of contracting the COVID-19 coronavirus, brick-and-mortar retail sales began to hemorrhage, forcing merchants to move online to survive. Shopify was there to answer the call.

As a result, Shopify grew revenue by 47% in the first quarter of 2020, consistent with its performance last year, but revenue growth accelerated to a massive 97% increase in Q2, while GMV soared 119%. The company also produced an unexpected profit in the second quarter, illustrating Shopify's ability to leverage its increasing merchant base to boost its bottom line.

These factors have conspired to boost Shopify's stock price, up 158% in 2020, continuing its hectic pace from last year. 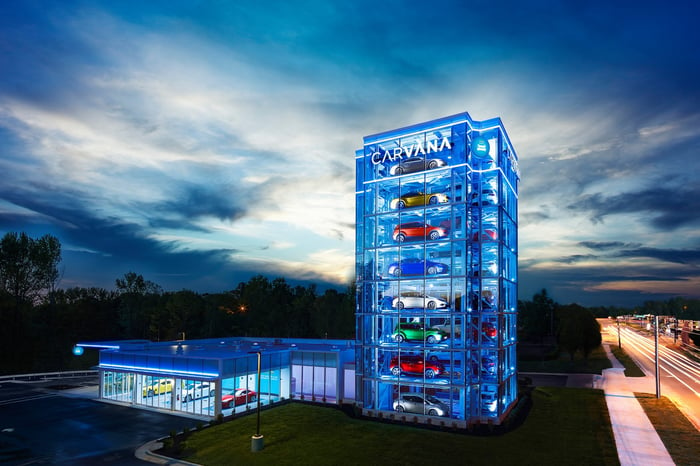 The combination of automobile sales and e-commerce might seem counterintuitive at first glance, but Carvana (CVNA -7.38%) was way ahead of the curve in 2019. The company made a name for itself over the past several years as the leading e-commerce platform for buying and selling used cars, an industry that was ripe for disruption. Customers can shop Carvana's website, with its inventory of more than 15,000 vehicles, and can also arrange financing, purchases, and trade-ins, as well as schedule a delivery as soon as the next day.

While most customers have their new set of wheels delivered on a flatbed, the company became known for its trademark network of 25 car vending machines. The latest all-glass structure holds as many as 27 vehicles and stands eight stories high.

This new approach to car sales paid huge dividends. In 2019, Carvana boasted the fastest organic growth of any automotive retailer in U.S. history, with revenue that soared 101% year over year, marking its sixth consecutive year of triple-digit revenue growth. At the same time, the number of vehicle sales increased 231%.

Fast-forward to 2020 and the onset of the pandemic, and you might expect Carvana's growth streak to end. While the company did see a significant deceleration in the face of massive economic uncertainty, the company was able to increase its revenue by 27% year over year for the first six months of 2020. Carvana also instituted white-glove, touchless delivery services, helping unit sales increase 33% year over year during the same period.

Carvana's ability to engineer growth, even in the face of the pandemic, has sent investors on a buying binge, bidding the stock up by 120% so far this year, building on its gains from 2019. 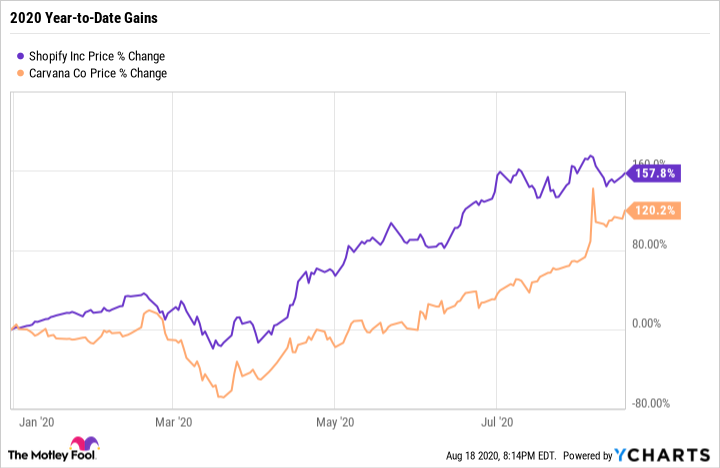 Given that neither company has yet reached consistent profitability, and given the tremendous stock runs since the beginning of 2019, these companies are by no means cheap. On a price-to-sales basis, Shopify sports a forward valuation of more than 47 -- when a ratio of between 1 and 2 is considered good. Carvana has a slightly more reasonable, though still somewhat frothy, forward valuation of 7. Each company is using technology and a holistic approach to disrupt an industry, and given their historic growth rates, investors have been willing to pay up for quality and the potential for continued strong revenue growth.

Past performance is no guarantee of future results, as the old saying goes, but in some instances it can act as a forward-looking indicator. In the case of Shopify and Carvana -- and given what we've seen so far -- history is on their side.