Investors like the recent moves the company has made to shore up its business during the pandemic.

On Friday, as both the S&P 500 and the Nasdaq index set new record highs, Best Buy (BBY -1.41%) notched its own milestone in its 35-year life as a publicly traded company. The electronics retailer's stock hit its peak, on two instances reaching $114.25 per share during the trading day.

Although the retail sector has been decimated by the economic damage wrought by the coronavirus pandemic, Best Buy has held up relatively well. Early in the crisis, in the wake of store closings, it modified its business to contactless, curbside-only pickup, and delivery. Consequently, sales in the final six weeks of its first quarter of fiscal 2021 were 81% those of the same period of 2019. Other retailers saw their top lines erode at much steeper rates. 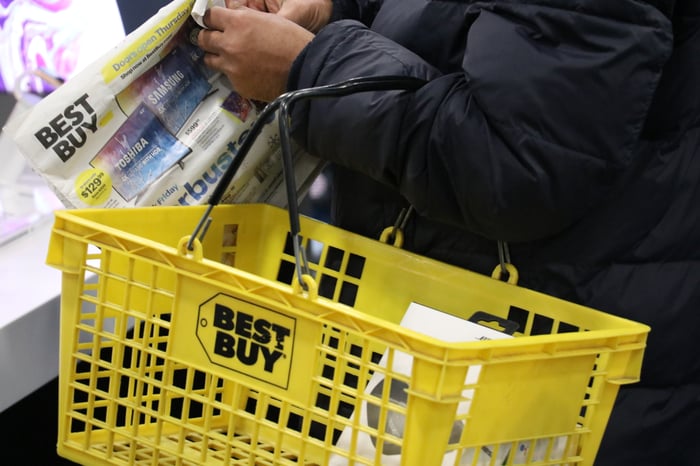 Another factor in Best Buy's popularity surge among investors is the strides it's making in online sales. These grew 155% year over year during the quarter, aided by an effective delivery system that shipped the purchased items directly from store inventories most of the time. All told, for the quarter, digital sales were $3.34 billion, and they grew to comprise 39% of overall revenue.

In the immediate future, much will depend on Best Buy's second-quarter results, which are slated to be released next Tuesday, Aug. 25. Due to the uncertainty of the pandemic's effect on its business, the company hasn't provided guidance for the quarter.

Best Buy's stock ended up closing down from its peak during the trading day, settling at exactly $114. Still, that's a new record for its closing price, coming in $0.02 above the previous record.