Please ensure Javascript is enabled for purposes of website accessibility
Log In Help Join The Motley Fool
Free Article Join Over 1 Million Premium Members And Get More In-Depth Stock Guidance and Research
By Rick Munarriz – Aug 21, 2020 at 10:00AM

The electric car speedster just passed the world's largest retailer in terms of market cap. The race isn't over.

I'm going to suggest something contrarian, and hopefully I won't have to turn in my jester bells for it. I feel that Walmart (WMT -0.35%) will be a better investment than Tesla Motors (TSLA -1.14%) in the coming 12 months.

I realize that Tesla's flooring it right now. Everyone's buying in ahead of Tesla's stock split that kicks in at the end of the month. Walmart has been retreating this week despite a blowout financial report on Tuesday. The market is concerned about the retailer's business slowing in the current quarter. I get it, but using today as a starting line and a year from now as the finish line, I feel that Walmart will be the better pick.

Tesla and Walmart aren't typically mentioned in the same sentence. Why should they be? They have little in common. The last time the two companies made headlines together was a year ago, when Walmart sued Tesla over rooftop solar panels that caught fire at seven of the discount retailer's stores. The two parties settled out of court.

This week, the two have been tethered together again in the news after Tesla Motors overtook Walmart on Thursday to command the larger market cap. It's a cool story, but I still think Walmart will be one with the greater market capitalization a year from now. 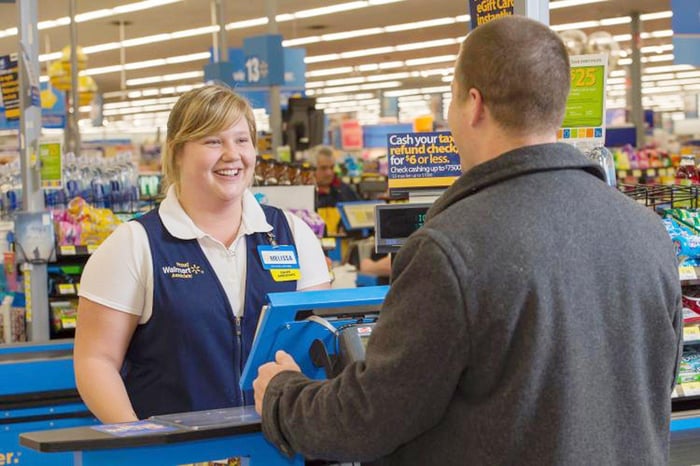 Tesla's $373 billion market cap at Thursday's close is astounding. Over the past year, it has flashed its high beams and driven past all of the world's leading automakers. On Thursday, it cracked the top 10 of all publicly traded stocks on stateside exchanges, bumping Walmart off the list.

Amazing things happen when your stock has soared 786% over the past year. Walmart checks in with a comparatively pedestrian 17% return in that time.

But Tesla obviously isn't larger than Walmart in terms of reach. Even with its big-ticket cars to sell, the nearly $26 billion in revenue that Tesla delivered over the past year is a mere sliver of Walmart's $542 billion in trailing net sales.

The loudest bullish argument for Tesla is that it's a game-changing growth stock, and that's true in all but the most important yardstick: growth. You may be surprised to learn that Tesla hasn't been growing faster than Walmart over the past year. Tesla's revenue over the past four quarters is just 3% ahead of where it was a year earlier. Walmart squeezes out the win here with its 5% top-line advance over the past year.

Tesla is just starting to come into its own on the bottom line, and it should be able to build on that profitability in the coming years. But Walmart has been profitable for decades, even through recessions and the current pandemic. It's been shelling out quarterly payouts to its shareholders since 1974, increasing them every single year. Tesla investors will argue that distributions don't matter, and with the kind of capital gains that they have experienced over the past year, the point is valid. However, when the going gets rough, Walmart's seemingly modest 1.6% yield is going to make a difference.

We're in a recession now. Walmart shares slumped after the mass-market retailer revealed that comparable-store sales decelerated to a 4% gain in July. It feels that the economy is slowing now that the springtime stimulus checks are tapering off. Is Tesla really going to perform well in this climate?

There's a lot to like in Tesla, but not at current valuations. There's a lot to dislike in Walmart, but as an all-weather winner, it's probably the kind of stock you want to own right now. I'll take my lumps a year from now if Tesla's still worth more than Walmart in terms of market cap, but I don't think I'll have to. I see Walmart as the better investment right now.

Is Now the Right Time to Buy Walmart Stock?
351%