The Dow Jones Industrial Average (^DJI) was up 0.4% as of 1:30 p.m. EDT following positive economic news from the housing market. U.S. sales of previously owned homes increased by the most on record in July, rising to the fastest pace since 2006. Despite the COVID-19 pandemic and intense economic uncertainty, rock-bottom mortgage rates are fueling demand for housing.

Apple (AAPL -0.34%) was leading the Dow higher on Friday, surging on no apparent news. Also up were consumer stocks Walmart (WMT -0.10%), Nike (NKE 1.29%), and McDonald's (MCD), which may have benefited from the strong housing data. 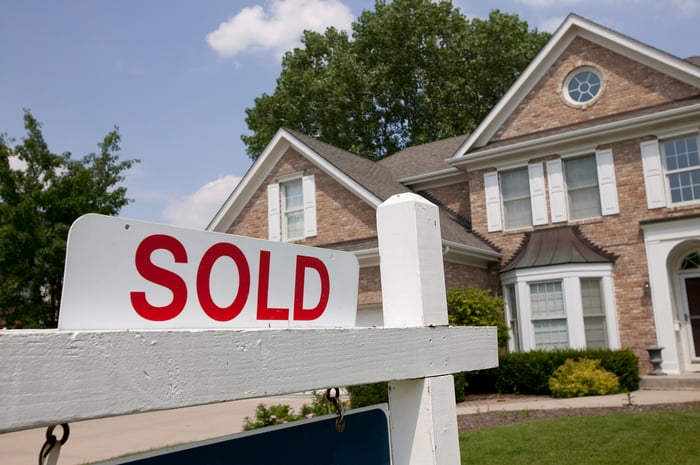 Apple's market capitalization crossed the $2 trillion threshold earlier this week, and the stock does not appear to be out of gas. Shares of Apple were up about 4% by early Friday afternoon. There was no obvious news driving the gain.

Apple's business has held up well during the pandemic. Despite store closures and a historically weak economy, the Mac maker managed to grow revenue by 11% in its fiscal third quarter, which ran from April through June. Revenue was up in all of Apple's segments, with the company's pricey gadgets in demand as people spent more time at home.

Apple's strong performance has likely given investors some confidence that the company will be able to maintain its bottom line throughout the pandemic crisis. But Apple's results were partly driven by unprecedented economic stimulus. Direct payments were sent to most Americans after the pandemic escalated, and the federal government tacked on an extra $600 to weekly unemployment checks through July. Apple was clearly a beneficiary.

Further gains for the tech stock will depend on investors continuing to be fine with a historically high valuation. Apple now trades for around 37 times trailing earnings. The company will also need to successfully launch a new slate of iPhones later this year into a very weak economic environment. While more stimulus is likely, the scope will almost certainly be smaller than the CARES Act.

Including Friday's rally, Apple stock is now up roughly 67% since the start of the year. Shares have more than doubled since bottoming out in March.

Apple was the Dow's big winner on Friday, but shares of Walmart, Nike, and McDonald's also put up some healthy gains.

Walmart stock has been sinking in recent days following a second-quarter report that featured strong sales growth but also a warning from management about a normalization of sales as the benefits of economic stimulus faded. The retailer should be well positioned for a holiday season skewed toward e-commerce, although overall holiday sales could be weak. Walmart stock was up 1.1% in the afternoon.

Nike's sales were hit hard by stay-at-home orders, with many of its owned and partner stores temporarily closed. Sales in the quarter that ended on May 31 were down 38%. Earlier this week, analysts at Susquehanna predicted that Nike would surpass its long-term targets, driven by a focus on direct-to-consumer and cost savings. Nike stock was up about 1%.

McDonald's stock was also up on Friday, gaining roughly 0.6%. The restaurant chain is better positioned than most for the current environment, given its focus on drive-thrus, but it has been hit hard during the breakfast hours. McDonald's U.S. comparable-store sales shrank by just 2.3% in June, a vast improvement over the double-digit decline suffered in April.

While there wasn't any company-specific news driving these consumer stocks higher, the strong housing report may be giving investors some confidence in the economic recovery.