Please ensure Javascript is enabled for purposes of website accessibility
Log In Help Join The Motley Fool
Free Article Join Over 1 Million Premium Members And Get More In-Depth Stock Guidance and Research
By Rich Duprey - Aug 24, 2020 at 10:51AM

Demand in China for the Model 3 sedan looks to be huge.

Tesla (TSLA -2.62%) is going to benefit so much from pent-up electric vehicle demand in China that one analyst says his best-case scenario for the stock will see it rocket 70% higher to $3,500 per share from its current price of $2,050.

Wedbush analyst Daniel Ives told investors in a note Tesla's recent price cuts coming at a time when demand for its Model 3 was welling up created a "perfect storm of demand" that alone would be worth an additional $400 per share or more being added to the stock price. 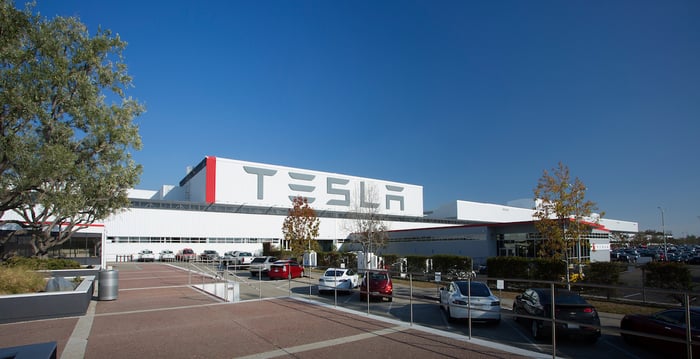 Gigafactory 3 is Tesla's advanced, state-of-the-art facility in Shanghai designed to produce both its Model 3 and Model Y electric motors and battery packs, as well as Tesla's Powerwall and Powerpack energy storage products.

The factory is currently dedicated to Model 3 production, but is undergoing a second phase of construction that appears to be nearing completion that will handle production of the Model Y.

According to TheFly.com, Ives wrote the factory's demand appears to be suggesting a 150,000 unit run rate for the Model 3 in its very first year of production. He noted the China component of Tesla's electric vehicle growth story could add $35 in earnings per share by 2025 or 2026, compared to prior estimates of $20 to $25 per share. It's the reason he hiked his best-case scenario price target.

However, it's notable Ives' primary outlook for Tesla maintains a neutral rating on the stock and a $1,900 price target.