COVID-19 has turned the part of the economy that relies on in-person interaction on its head, and the restaurant industry has been hit particularly hard. Things are starting to normalize, but many brands have a long way to go to full recovery -- and some may never be the same. That's the boat Applebee's and IHOP parent Dine Brands Global (NYSE:DIN) finds itself in. The two familiar casual chains are reporting recovering traffic, but a high load of debt and shifting trends make me think there are better restaurant stocks.

Applebee's and IHOP illustrate just how severe the effects of the economic lockdown have been on restaurants. During the first week of April, which kicked off the company's 2020 second quarter, comparable-store sales (or comps, an average of foot traffic and guest ticket size) were down 77.0% at Applebee's and 81.5% at IHOP compared to a year ago. As the economy has slowly reopened, guests have come streaming back, but as of the week ended July 26 (about one month into Dine Brands' third quarter), Applebee's and IHOP's comps remain down 15.6% and 35.0%, respectively, from the same week in 2019.

To the company's credit, its franchisees were able to pivot to off-premises sales (pick-up and delivery), which made up 60.5% of total revenue in the second quarter, compared to just 13% of the mix during the final quarter of 2019. Nevertheless, revenue tumbled 52% to $110 million, and the bottom line swung to an adjusted loss of $14 million, compared to adjusted income of $30.0 million last year. To shore up its cash flow, the company had to suspend its dividend payment.

Going forward, Dine Brands will certainly benefit from the economy getting back to normal. However, it's becoming clear that the restaurant industry overall will need to adapt to a more mobile consumer, one who expects delivery to be an option. And on that front, there are plenty of names out there in better financial shape and more nimble than Applebee's and IHOP to cope with the new reality. 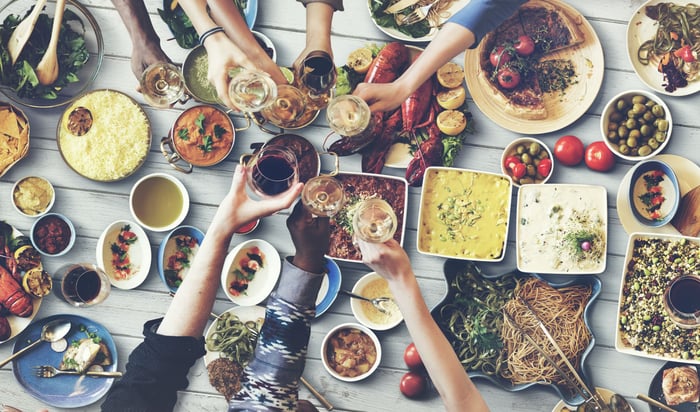 Profitable, but by how much?

I'm certainly not saying Dine is going down anytime soon. On the contrary, with nearly $279 million in unrestricted cash and equivalents on the books and its franchisees responsible for day-to-day expenses related to operating restaurants, this chain can tough it out for a while. However, Dine ended the month of June with total long-term debt of $1.5 billion, which includes the draw down of $220 million from its revolving credit facility back in March.

The rub here is that higher debt and adapting to changes like delivery (which eats into a store's profits) could lower profitability going forward. As a franchise business model, Dine runs operating profit margins typically higher (historically well over 20%) than those of its average peer that owns and operates stores itself (like Cracker Barrel, which historically generated high single-digit margins). Nonetheless, I struggle to get overly excited about a highly indebted chain in a notoriously competitive industry like food service -- one that is experiencing monumental change at that.

A lot remains up in the air for Dine Brands, but it looks like Applebee's and IHOP will be okay for now. But at the end of the day, when it comes to restaurant stocks, I favor smaller and net cash positive outfits like Texas Roadhouse in the casual restaurant space.