The mobile game leader has made smart use of acquisitions to fuel returns for investors.

Over the last four years, Zynga (ZNGA) has scooped up top-performing mobile game studios around the world while delivering market-beating returns to investors. Doing lots of mergers and acquisitions, also known as M&A, is not always the best growth strategy, but Zynga knows how to do it in a way that adds tremendous value for the business, sending the stock price higher over time.

Here are three ways Zynga has been successful with its acquisition strategy.

Sometimes companies get too greedy to grow revenue at the expense of maintaining a healthy balance sheet. Companies often rely on issuing debt to finance large deals to get bigger faster, but Zynga steers far clear of that potential pitfall.

Instead, Zynga typically uses cash or a combination of cash and newly issued shares of stock to finance an acquisition. This allows Zynga to continue growing revenue and free cash flow while keeping its finances in good shape. 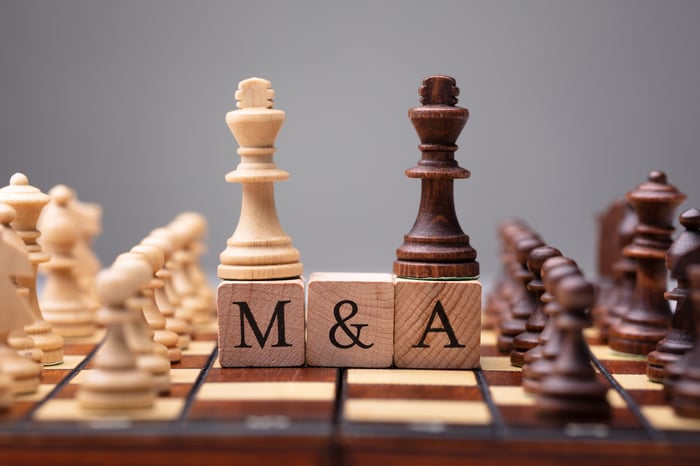 Zynga has made several acquisitions under CEO Frank Gibeau, who took over in 2016. It acquired the card games studio from Peak Games in 2017 for $100 million in cash. In 2018, Zynga acquired Gram Games in an all-cash deal. That same year, it also acquired Small Giant using both cash and stock. The most recent acquisitions of Peak and Rollic were also done without the use of debt.

The Rollic deal won't close until October, but when it's completed, Zynga will have spent a grand sum of $1.7 billion in cash on acquisitions since 2016. Yet Zynga ended the second quarter, before the Peak deal closed on July 2, with $1.5 billion in cash and short-term investments and $583 million in borrowings.

Zynga is doing more with these deals than just fueling its revenue and free cash flow growth. Zynga values the people at these studios as much as anything. For example, with the recent acquisition of Rollic, Zynga is bringing in a team that has expertise in monetizing hypercasual games with in-game advertising, which might improve Zynga's advertising efforts across more of its games eventually.

Here's how Gibeau describes Zynga's approach and why it's so successful: "Our proven integration model enables teams to maintain their unique development cultures while leveraging Zynga's highly scalable studio operations and publishing platform so we can collectively grow faster together."

Since 2015, Zynga's daily active users have increased from 16 million to 22 million through the second quarter. Concurrently, Zynga grew its free cash flow from $49 million in 2016 to $247 million over the last four quarters.

What this means is that Zynga's acquisitions are bringing in an engaged group of players from other franchises that are enhancing the company's profitability. Zynga credits its talented teams and data analytics for figuring out how to best monetize these players with new content.

As Gibeau explained on the second-quarter conference call, "To date, our acquisitions have delivered strong contributions to our live services, added multiple new forever franchises to our portfolio, expanded our new game pipeline, and opened up new categories for us on mobile."

Zynga has been a great growth stock for investors, more than tripling in value since Gibeau took over in 2016. It will welcome 17 million new daily active users from Peak and Rollic, combined, by the end of the year. Once Zynga fully integrates Peak and Rollic, Zynga could be off to the races.