Please ensure Javascript is enabled for purposes of website accessibility
Log In Help Join The Motley Fool
Free Article Join Over 1 Million Premium Members And Get More In-Depth Stock Guidance and Research
By Rachel Warren – Aug 27, 2020 at 6:47AM

This pharmaceutical giant can reward investors in even the toughest times.

In these uncertain times, you're not alone if you find yourself thinking extra long and hard before picking stocks. But even those with only $1,000 to invest shouldn't shy away from 2020's fray. Investing small amounts in dividend stocks poised for stable, long-term growth could still bring you noteworthy returns in 5 to 10 years. The key is to look for companies with a diversified portfolio of core products and a healthy balance sheet that can help you build wealth amid market fluctuations. Adding a dividend a source of passive income doesn't hurt either.

But not all dividend stocks are created equal. Some companies have slashed or even suspended their dividends altogether as a result of the pandemic.

Founded more than 160 years ago, pharmaceutical giant Bristol Myers Squibb (BMY -0.13%) is an investor-beloved large-cap stock that pays a solid dividend yield of about 2.9%. The company has a consistent track record of increasing its dividend, having done so four times in the last five years. While the pharmaceutical industry has been more resilient to the pandemic's ups and downs than others, the impact of COVID-19 on the global supply chain has rocked a few heavy-hitters in the drug business. Bristol Myers has relied on its varied portfolio of blockbuster drugs and a robust pipeline to tolerate this volatility -- and investors haven't been disappointed. Here's why you should consider investing $1,000 in this rock-solid dividend stock. A stable history of growth for shareholders

Before diving into Bristol Myers' financials, let's take a look at how much this stock has grown over the past decade-plus. We entered the current recession in February, according to the National Bureau of Economic Research. The last recession of this magnitude was The Great Recession, which spanned from December 2007 to June 2009, although its effects were felt long after its official start and finish.

If you had invested $1,000 in Bristol Myers in 2008, when the stock cost about $20, you could have purchased approximately 50 shares. That investment would be worth about $3,100 today. A larger investment of $5,000 would leave you with about $15,500 worth of stock. Bristol Myers' share growth hasn't been lightning fast, but the stock has stayed the course and held its own regardless of irregularities in the wider market. 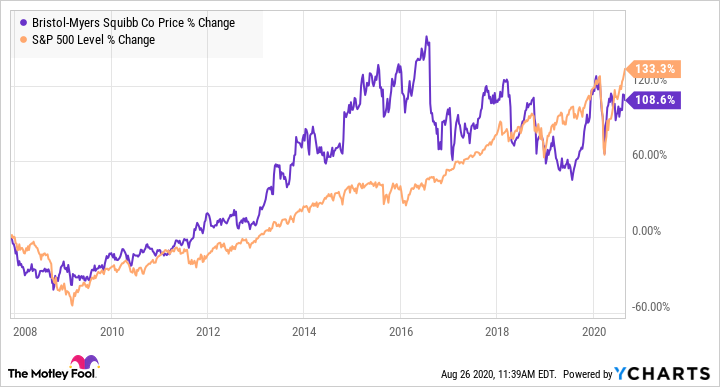 The company proved its recession resistance in the last downturn. In the final quarter of 2007, at the beginning of the Great Recession, Bristol Myers reported sales growth of 33%. In 2008 and 2009, the company saw sales growth of 13% and 6%, respectively.

Fast-forward to the current economic crisis, and Bristol Myers' track record of delivering strong earnings growth remains untarnished. In the first quarter of this year and during the initial days of the pandemic, the company reported revenues up an astonishing 82% on a pro forma basis from 2019, totaling $10.8 billion.

Bristol Myers Squibb released its Q2 2020 results on Aug. 6. The company reported $10.1 billion in revenue for the quarter, a 61% increase from Q2 2019. In the U.S., the company's Q2 revenue went up 77% on a year-over-year basis. Bristol Myers closed the second quarter with $22 billion in cash, cash equivalents, and marketable securities, set against nearly $47 billion of net debt.

The company's exceptional performance in the first and second quarters of the year in spite of pandemic volatility can be attributed in large part to its acquisition of Celgene. The deal, which closed in November of last year, significantly augmented Bristol Myers' hematology and oncology units, bringing new medicines and pipeline products into the fold.

In fact, Bristol Myers estimated that the Celgene acquisition was responsible for 71% of its earnings growth in the first three months of 2020 alone. The company's high debt can also be traced back to the Celgene purchase. But given how profitable the acquisition has been so far for Bristol Myers, it's safe to say that the company should be able to trim its debt in the quarters to come.

A diverse, profitable lineup of products

Among the many green flags waving for Bristol Myers' future (and its balance sheet) is the company's incredible lineup of products. Three notable mentions are blockbuster drugs Revlimid, Opdivo, and Eliquis. Bristol Myers acquired Revlimid as part of its Celgene transaction. The drug amassed sales of nearly $5.8 billion in the first half of 2020. First-half revenues for two of Bristol Myers' blockbuster drugs, Opdivo and Eliquis, totaled $3.4 billion and $4.8 billion, respectively. The company's autoimmune drug Orencia also reaffirmed its blockbuster status in the first six months of 2020, reaching $1.5 billion in sales. Of this list, only Opdivo saw a negative sales shift this year, down 2% from Q2 2019.

Another product from the Celgene acquisition, Polymast/Imnovid, a drug used to treat patients with multiple myeloma, is also turning out to be a significant revenue driver for the company. The prescription medication brought in $1.5 billion during the half ending June 30. The drug was also approved by the U.S. Food and Drug Administration (FDA) in May to treat individuals diagnosed with Kaposi sarcoma. This type of cancer can appear in patients with acquired immunodeficiency syndrome (AIDS) and in those without the syndrome, although it can be especially dangerous in people with AIDS whose bodies have become resistant to highly active antiretroviral therapy (HAART).

It's possible that Bristol Myers will increase its annual revenue over the next five years by 18.4%, according to some analysts. That's certainly not a stretch of the imagination given how this dividend stock has remained resilient and profitable in past economic crises and has been tough during a global pandemic.

Its versatile portfolio, fueled by the buyout of Celgene and its own outstanding medications, its robust cash reserves, and recession-resistant product segments are just a few reasons why this stock is one you can buy and hold for the next decade. At about $62 per share as of Aug. 26, even those looking to invest on a budget can get in on Bristol Myers' inevitable climb.

Is Bristol Myers Squibb Stock a Buy With Its New-Product Sales Soaring?
356%