Please ensure Javascript is enabled for purposes of website accessibility
Log In Help Join The Motley Fool
Free Article Join Over 1 Million Premium Members And Get More In-Depth Stock Guidance and Research
By Brent Nyitray, CFA – Aug 28, 2020 at 6:00AM

Could this be a good environment for debt collectors?

The COVID-19 crisis has certainly put many people in financial distress, as the unemployment rate sits at double digits and it seems we keep getting upward of a million new jobless claims each week. Financial distress invariably means people will struggle to pay their bills and may default on their consumer loans.

This, in theory, should be a great time for debt collectors to pick up distressed loans; there should be plenty of supply. But in a tough economy, people will struggle to pay their bills, so collections should be down. It's a push-pull phenomenon. So how is PRA Group (PRAA 0.61%) holding up in the current environment?

PRA Group collects unpaid debts at pennies on the dollar

PRA Group is a debt collector. It buys portfolios of nonperforming loans from credit card companies, banks, auto loan investors, and other creditors. Essentially, when these sellers have been unsuccessful in getting borrowers to make the required payments, they sell them at a discount to someone like PRA Group. PRA Group then tries to use the legal system to get the borrower to pay up. PRA also has an insolvency business, which involves buying nonperforming debt after the customer has entered personal bankruptcy. Last year, PRA purchased $11.7 billion in receivables for a total of $1.3 billion, which means PRA is buying loans at 11 cents on the dollar. 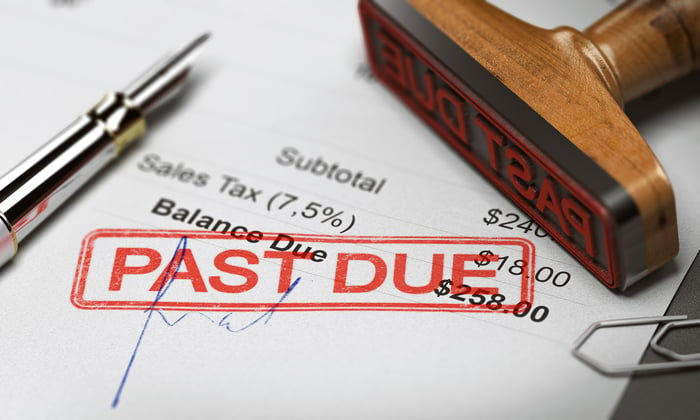 The current environment is surprisingly good for debt collectors

With many Americans out of work, you would think that collecting on bad debts would be difficult. In fact, it turns out to be the opposite. In PRA Group's second-quarter earnings release, Kevin Stevenson, its president and CEO, said:

During June, we continued to see the same collection trends we reported in April and May. Cash collections were particularly strong in the U.S. and helped drive a global record during the second quarter. As discussed on our Q1 2020 conference call, due to various circumstances, we believe U.S. consumers have additional discretionary funds, and many are taking this opportunity to voluntarily resolve their debts. Demonstrating this, U.S. cash collections from PRA's digital channel grew over 90% from Q2 2019.

So, collections are up, despite an awful economy. What could be driving that? It could be that the extra unemployment benefits or stimulus checks helped borrowers come up with extra funds. It could also be driven by lower discretionary spending given that restaurants, bars, theaters, etc., have been closed due to social distancing regulations. Forbearance may be playing a role as well, as many borrowers are able to forgo mortgage payments and are using the extra money to pay down higher-cost debt. One more reason for increased collections? People are easier to find.

In the earnings press release, Stevenson also said that the company expects to see a wave of charge-offs by banks, which should increase the supply of nonperforming loans. While the effects of fiscal stimulus and forbearance will be temporary, the drop in entertainment spending may be more persistent. The improving economy will help drive up performance as well.

Outperforming the banks and the financials

In the second quarter, PRA reported a 8% increase in revenue, along with a 76% increase in operating earnings driven by higher revenue and lower expenses. The stock has been a stellar performer this year, up nearly 26% through Thursday's close. The company trades at roughly 15.5 times expected 2020 earnings per share, which is reasonable given the expected 55% growth in earnings per share this year. Below is a chart of PRA Group's price-to-earnings ratio over the past 20 years. 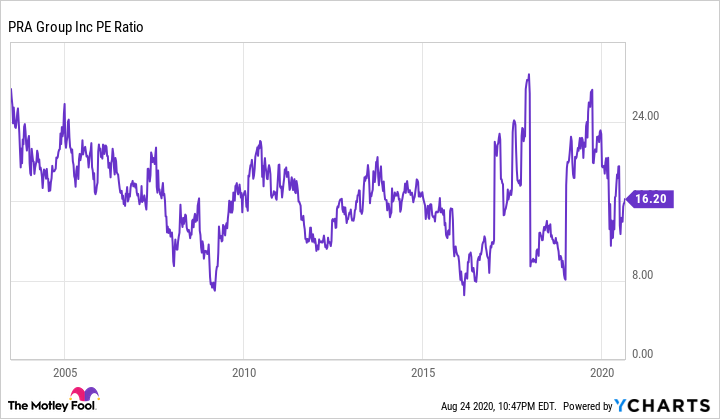 PRA is trading at the lower end of its historical range, and it's in a favorable operating environment. If banks see a wave of charge-offs early next year, PRA could see strong earnings in 2021 as well.

Year to date, PRA has outperformed the S&P SPDR Bank ETF (KBE 2.62%) and the S&P Financial Select Sector ETF (XLF 2.70%) by 58% and 45%, respectively. As one of the few financials that have done well this year, PRA is certainly worth a look.