Please ensure Javascript is enabled for purposes of website accessibility
Log In Help Join The Motley Fool
Free Article Join Over 1 Million Premium Members And Get More In-Depth Stock Guidance and Research
By Howard Smith - Aug 28, 2020 at 7:20AM

The solar energy technology company has thrived among competitors in a growing market.

Enphase Energy (ENPH 0.30%), a leading supplier of solar power system solutions, has several things in common with electric vehicle maker, Tesla (TSLA -0.37%). Both are in the growing renewable energy space, and both are growth stocks with high valuations.

As a first-mover in its market, Tesla's share price has been driven mostly by its potential, and the company has faced limited potential competition. While that potential may live up to expectations, Enphase has already shown it can achieve high margins, and growing sales, among competition in a fast-growing sector. 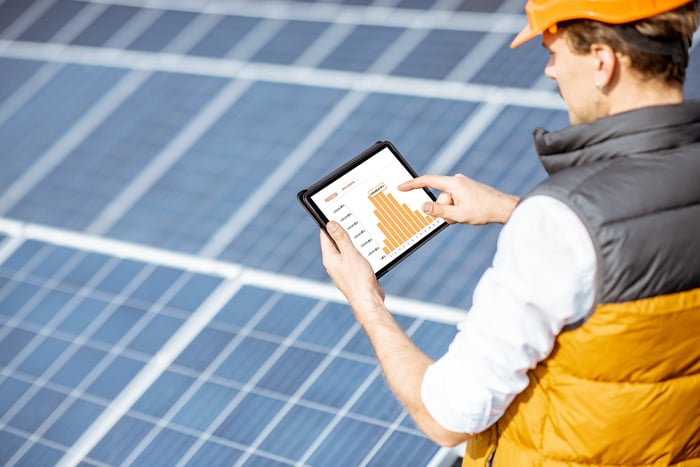 Enphase's main business is manufacturing and supplying microinverters, the devices that convert power at the solar panel into the AC power used in the home. In 2018, it acquired SunPower's (SPWR 1.65%) microinverter business. The acquisition gave it an immediate boost in market share, as it began supplying its own microinverter design for SunPower's solar panels. The move led to steadily increasing sales and margins prior to the disruption caused by the COVID-19 pandemic.

The International Energy Agency (IEA) reported that solar power generation grew 22% in 2019, the second-largest renewable energy growth after wind. It believes that solar energy is on track for average annual growth of 15% for the next 10 years.

That helps explain the strong growth Enphase has experienced, but it's more impressive that the sales and profitability have grown with plenty of competition in the sector. Israel-based SolarEdge (SEDG 2.12%) uses a different approach to microinverter technology, and generator-maker Generac (GNRC 5.48%) has recently entered the space with a solar energy battery storage system.

While Tesla has been wildly successful as an investment, its business has yet to face meaningful competition. Traditional automakers will soon have battery electric vehicle (BEV) offerings that will rival Tesla's products. It's not to say that Tesla can't excel among those competitors, but the stock's valuation doesn't seem to account for any challenges ahead.

Investors don't seem to know how to value Tesla. Besides its growing battery electric vehicle business, it also has a solar roof segment, and its battery development technology may greatly expand its reach beyond the automotive sector.

So while there may be a large, though unknown amount of growth ahead for Tesla, the coming BEV competition will make it hard to improve profit margins going forward. And current gross margins are currently about half as high as those of Enphase. 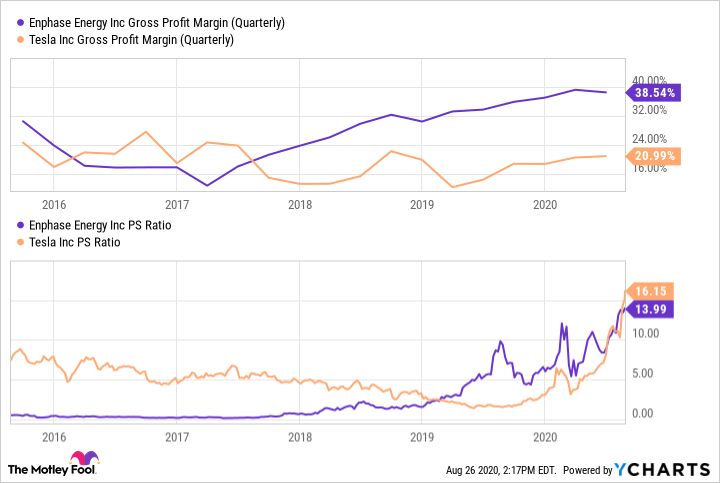 There's no denying that Enphase's valuation is high by traditional metrics. Investors tend to value growth businesses well above what some would consider reasonable levels. That is because the path for the business to grow into its valuation is clear.

Amazon (AMZN 0.14%) stock traded at absurdly high levels for years based against earnings. But that was because its high levels of cash-flow generation were being reinvested back in the business. A clear path to profitability was apparent when those investments tapered off.

Enphase has demonstrated its strong cash-flow from operations during its recent growth phase, as can be seen in the below graph. 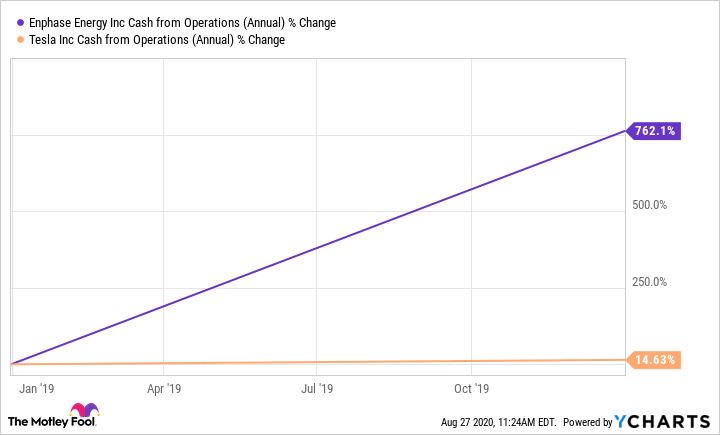 The question for Tesla investors is how it will grow into its valuation. In the face of competition for its main product, that is not completely clear. The hope is that there will be a huge future market for its vehicles, along with its battery technology. Enphase investors have a fundamental business to value today. And that business also has a long growth runway ahead.