Please ensure Javascript is enabled for purposes of website accessibility
Log In Help Join The Motley Fool
Free Article Join Over 1 Million Premium Members And Get More In-Depth Stock Guidance and Research
By Royston Yang - Aug 30, 2020 at 9:50AM

With a combination of strong future growth and an enduring franchise, these are two stocks I plan to hold for the rest of my life.

Buying a stock is like owning a small stake in the business that it represents. Great businesses are the ones that grow steadily over time and help to compound your wealth many times over. Such businesses, however, are not easily found, and it's necessary to study a business over some time to assess how it handles crises and competition.

The best stocks are those that offer tantalizing future prospects and have strong franchises. A dominant position within an industry allows a market leader to wrestle market share away from smaller players, thus strengthening its competitive position over time. And management should be forward-looking and able to come up with strategic initiatives to continuously grow the business.

Here are two stocks with the above attributes that I plan to hold for the rest of my life. 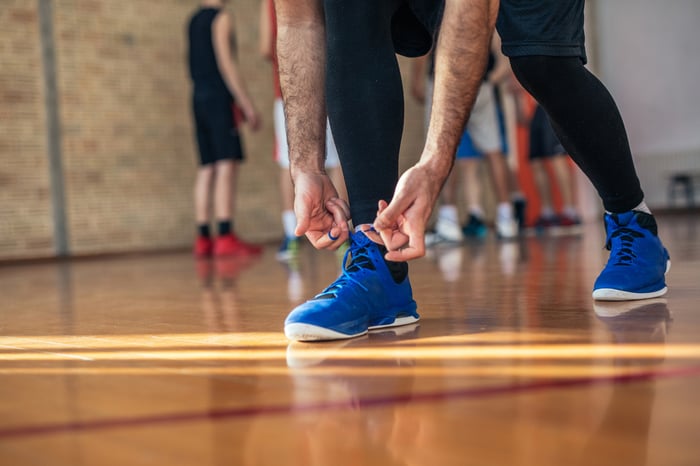 Nike (NKE -0.68%) is undoubtedly a leader when it comes to innovative sports footwear. The sports giant has been at the forefront of research and development into ways to improve runners' efficiency, and so far it has remained one step ahead of its competitors. The new Nike Air Zoom Alphafly Next% shoe has been touted as an advancement in footwear that maximizes an athlete's potential, and is so energy-efficient that it narrowly avoided a World Athletics ban.

Although Nike stores have been hit hard by widespread closures in the wake of the COVID-19 pandemic, digital sales increased by 75% year-over-year during the fourth quarter ended May 31, and made up 30% of total revenue. CEO John Donahoe outlined Nike's increased digital demand and engagement in the company's earnings conference call. Workouts on the Nike Training Club app more than tripled to hit nearly five million workouts per week during April, while the Nike Commerce App has been downloaded more than eight million times since February, more than triple last year's increase.

The company continues to drum up interest for its products through smart marketing. This month, it has roped in tennis star Rafael Nadal and golf star Tiger Woods to collaborate on a limited-edition new shoe design. The sneakers will feature Nadal's logo on the right shoe and Woods' on the left, while Nike's signature swoosh logo is outlined in silver.

Investors can be confident that Nike can continue to garner good sales momentum due to its intense focus on research into new shoe designs, as well as its savvy marketing campaigns.

Mastercard (MA 0.73%) is one of the leading financial services companies in the world, with around 2.6 billion cards in circulation globally at the end of the second quarter of 2020.

Mastercard saw the worst decline back in April when volume and transactions plunged by 23% and 20%, respectively. But by June the decline was just in the low single digits. For the week ending July 21, there was even marginal year-over-year growth in both volume and transactions, reflecting the gradual improvement in spending as countries have eased lockdowns and movement restrictions.

The pandemic is acting as a catalyst and prompting more businesses to shift to digital transactions. According to a survey Mastercard conducted, 76% of small business in the U.S. say the pandemic pushed them to conduct digital business-to-business transactions. Encouragingly, 50% added a new digital service for collecting funds, while 25% transitioned to electronic invoicing. Such trends can also be extrapolated to other countries, and bode well for the growth of Mastercard's business.

Mastercard also remains active in acquisitions and collaborations to enhance its capabilities and expand its suite of offerings. In June it agreed to acquire Finicity, a provider of real-time access to financial data and insights, for $825 million. This acquisition serves to enhance Mastercard's open banking platform to safeguard a greater array of financial services.

The company also expanded its partnership with TransferWise to enable the issuance of cards in any market where Mastercard is accepted and TransferWise is licensed. This move could open Mastercard up to a new set of customers and allow it to expand its reach. A recently announced tie-up with Ally Financial (ALLY 1.11%) allows Mastercard to enter the point-of-sale installment-lending business, where there is a potential $1.8 trillion market waiting to be tapped.