Please ensure Javascript is enabled for purposes of website accessibility
Log In Help Join The Motley Fool
Free Article Join Over 1 Million Premium Members And Get More In-Depth Stock Guidance and Research
By Zhiyuan Sun – Aug 30, 2020 at 8:29AM

Here's why the time is right to invest in the largest cannabis company in the U.S.

Even among residents of the most conservative U.S. states, support for recreational marijuana legalization is reaching as high as 65%. Should the drug become legalized during the next presidency, it will undoubtedly solidify a brand-new sector in the U.S. economy.

Indeed, by 2025, the legal marijuana market in the U.S. is projected to surpass $33.9 billion, more than double this year's market opportunity. Considering that amount of growth, investors may be wondering what cannabis company can capitalize the most on this rising trend.

As it turns out, the best approach to take may well be to invest in the leading company in the sector -- winners keep winning, and losers keep losing. The most prominent U.S. cannabis company happens to be Curaleaf Holdings (CURLF 0.30%). Let's look at whether you should buy it. 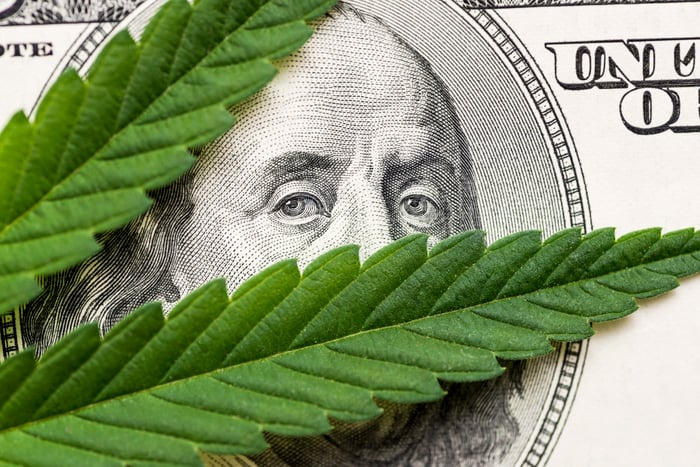 What's the rationale for buying Curaleaf?

As of June 30, Curaleaf had about $122.8 million in cash and $283.3 million in debt. Its market cap is about $4.5 billion. That gives Curaleaf a 10 times price-to-sales valuation, which may seem expensive. However, it is important to keep in mind that investors are getting a lot for their money here, especially in terms of growth.

Most striking of all, Curaleaf was able to expand its adjusted earnings more than fivefold versus Q2 2019, to $28 million. Much of this growth is the result of the rising number of customers for its medical cannabis. During Q2 2020, 95,470 patients made at least two visits per month to the company's dispensaries, spending an average of $97.87 per visit. In Q2 2019, the company only had 54,242 medical marijuana customers.

Investors who buy Curaleaf now are not only paying for the triple-digit revenue growth of the past but also for the company's continued momentum. As of now, Curaleaf has more than 135 stores nationwide and distributes its products across more than 1,000 dispensaries.

In the most recent quarter alone, the company opened new stores in Florida, Massachusetts, and New York, while acquiring dispensaries in Arizona, Nevada, Maryland, and Nevada. In addition, Curaleaf also opened up shop for the first time in Illinois and Pennsylvania. The company's products hold a leading position in several key states, including New Jersey, where its cannabis products have nearly 36% market share.

With impressive growth, solid financials, expanding capacity, and an industry-leading position, Curaleaf has quickly become one of the premier pot stocks in the U.S. and Canada. For investors looking to buy an excellent cannabis company at the right price, Curaleaf is the right choice, and now is the right time to act.