Please ensure Javascript is enabled for purposes of website accessibility
Log In Help Join The Motley Fool
Free Article Join Over 1 Million Premium Members And Get More In-Depth Stock Guidance and Research
By Jon Quast – Aug 31, 2020 at 6:08AM

Not only do these companies have stable businesses with growing dividend payouts, they can also beat the market.

Investors assign labels to companies at the risk of creating false dichotomies. For example, "growth stocks" and "value stocks" are two prevalent categories, but these ideals aren't necessarily opposed.

Another misleading label is "retirement stock." On the surface, it typically suggests a company with a stable business paying a healthy dividend. And that's a great goal. But a retirement investment doesn't have to come at the expense of giving up any chance of beating the market average. Instead, there are stocks that offer the complete package of income and growth. 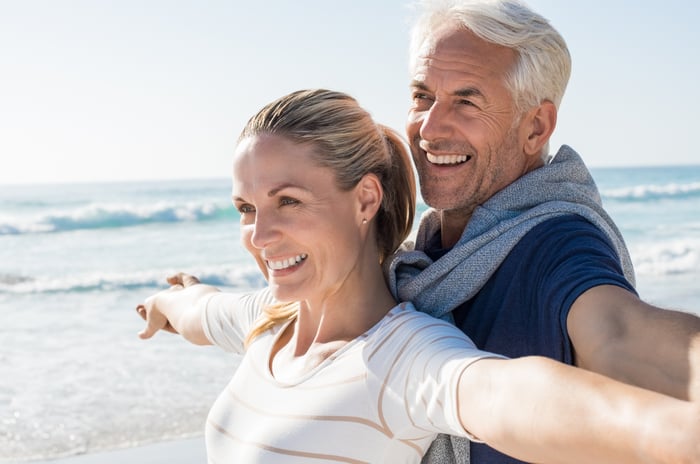 Under President Trump, government contractor Lockheed Martin has benefited from increased military spending. The company had $46 billion in net sales in 2015. In 2019, that figure was $60 billion, up around 30%. It used its record-setting results to continue rewarding shareholders by buying back stock and paying a growing dividend that currently yields 2.4%. 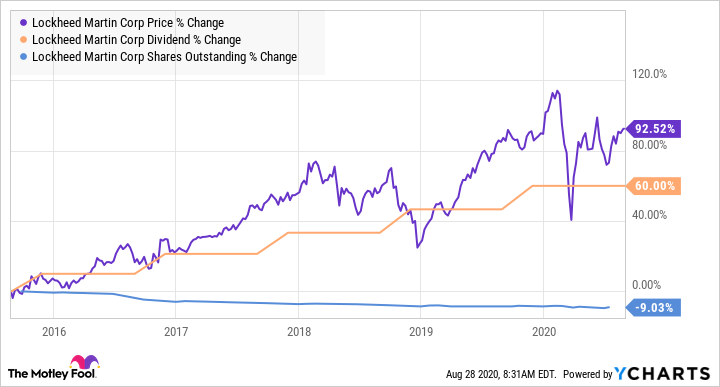 Even though Lockheed Martin has benefited under the current administration, investors don't need to fret about the upcoming election. Every president brings an agenda to the national budget, but the implementation can take years. Furthermore, the company can endure Pentagon budget cuts because it provides certain products and services that aren't in danger of being cut. And the contractor had a record backlog of $150 billion as of the second quarter of 2020. This is already under contract and will be realized over the course of years.

Besides that existing backlog, Lockheed Martin has inked a $62 billion deal to manufacture F-16 fighter jets for U.S. allies. This decade-long tailwind isn't reliant on domestic budget decisions. Additionally, new CEO James Taiclet believes the company has something to offer in the development of 5G technology, which could even provide an unforeseen growth avenue.

In short, Lockheed Martin's core business is safe, it has new avenues for growth, and I expect it will keep rewarding shareholders over the next five years as it's done over the previous five.

I consider Home Depot's business safe because it sells products for something virtually everyone has: a home. We all live somewhere, and whether it's regular maintenance or cosmetic upgrades, we incur costs somewhere. The company has a broad application, equally appealing to the professional contractor and the do-it-yourself customer. And as this stable business keeps humming, management has systematically reduced the outstanding share count (boosting per-share profits) and regularly increased the dividend. 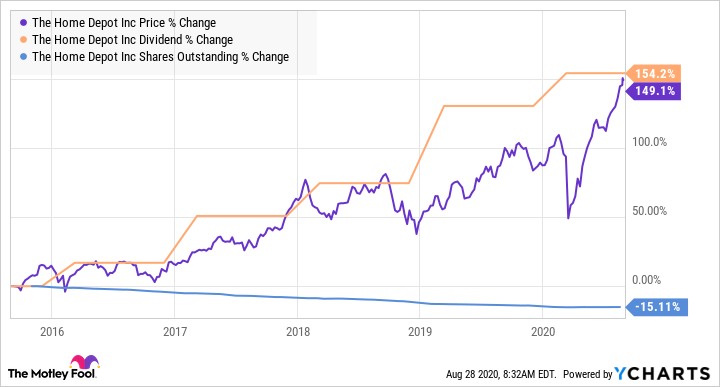 We may be in a global pandemic, but Home Depot is thriving like never before. In the quarter ending Aug. 2, the company had record quarterly sales of $38 billion, up 23% year over year. And in the first half of 2020, net sales are up 16%, as people stuck at home decide to tackle their to-do lists.

It's not realistic to expect the good times to keep rolling like this for Home Depot. As to-do items get checked off, customers are likely to decrease these spending levels in coming quarters. Furthermore, the company benefited from inflation in items like lumber, which are probably only temporary spikes resulting from the coronavirus disruption to supply chains. These are headwinds facing Home Depot's year-over-year comparisons.

But it's also not realistic to expect Home Depot's business to fall off a cliff -- only return to normal. And under normal conditions, Home Depot grows revenue, grows profits, and grows its dividend. While I think both Lowe's and Home Depot are winners, I acknowledge Home Depot's dividend yield is superior at 2%, versus 1.4% for Lowe's.

As a global food-service company, Starbucks was hit particularly hard by the coronavirus. Through the first three quarters of its fiscal 2020, net revenue is down 12.4% from the comparable period in fiscal 2019. The impact was most acute in the third quarter, with net revenue down 38%. But despite the challenge of limited cafe seating, Starbucks didn't pause or reduce its dividend. 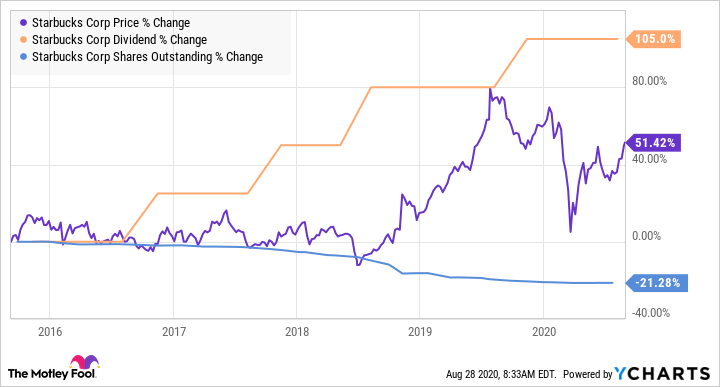 The worst is hopefully over for Starbucks. It started Q3 with 56% of U.S. locations closed, but ended the quarter with 96% open. That led to a steady improvement in sales. In fact, comparable sales at U.S. locations that were open for the entire quarter were actually up 2% year over year in July, suggesting business will return to normal soon after everything's back open.

Starbucks has been a massive winner over the long haul, a 100-bagger since 1994. But of the three stocks here, Starbucks is the one that has underperformed the market over the last five years. Buying today gives retirees a stock still down 15% from highs set in 2019, with great growth prospects. The company looks like a buy as it opens new locations in China again after a brief pause, and as it pursues better profits in the U.S. by closing low-volume locations and replacing them with operations that are to-go only.