The casino operator's stock is giving back some gains as investors digest the positives and negatives of recent events.

Shares of casino operator MGM Resorts International (MGM -1.33%) were lower by roughly 5% at 2 p.m. EDT. The drop comes after gains toward the end of last week, leaving the stock up just 2% over the trailing 5-day span. It's the big picture here that's the real issue.

Late last week MGM Resorts had some good news: It reopened the Mirage in Las Vegas on the same day that it announced that it had commenced online gambling operations (BetMGM) in West Virginia. The stock moved higher on the news, which makes complete sense. Adding an online alternative for customers to gamble will help MGM Resorts offset declines in its physical gambling operations. And reopening the Mirage is, effectively, a step toward a more normal business environment. 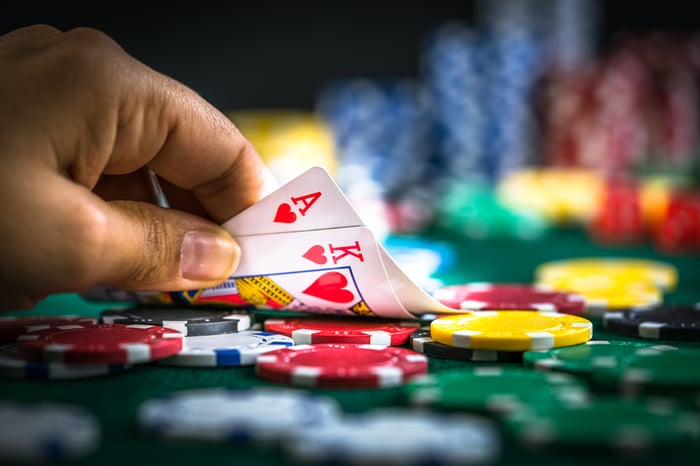 Only a day later MGM Resorts announced that it was laying off some 18,000 employees. The stock gained ground again on that news, likely because the decision would help reduce costs. However, such a large staff reduction following the reopening of the Mirage and the launch of online gambling in West Virginia is something of a "two steps forward, one step back" scenario. And it highlights just how difficult the current operating environment really is today. Yes, the company continues to move forward in as positive a way as possible, but progress is slow, at best. So, it really isn't particularly shocking that the stock has started to give back some of the gains from the previous week.

MGM Resorts International is not a stock for conservative long-term investors. There are a lot of moving parts today and a lot of what happens from here depends on the progress the world makes in the fight against COVID-19. Volatility is likely to remain high for the foreseeable future.