Walmart is launching a membership program focused on grocery delivery, and analysts are playing catch-up as Apple stock continues to rally.

The Dow Jones Industrial Average (^DJI 3.15%) was modestly higher Tuesday afternoon, although it trailed the tech-heavy Nasdaq Composite by a wide margin. The Dow was up 0.23% at 1:20 p.m. EDT. 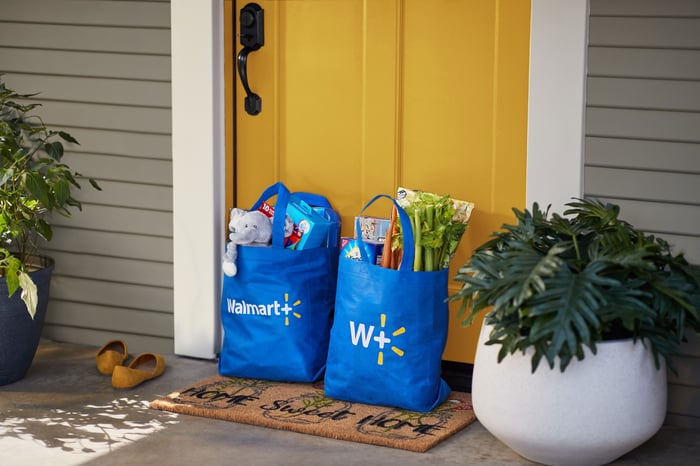 Mega-retailer Walmart has tried subscription membership programs before, but the grocery-focused Walmart+ has a real chance at success. The company announced on Tuesday that the service will officially launch on Sept. 15, priced at $98 per year or $12.95 per month.

Unlike Amazon Prime, which offers free shipping on a very large number of items, Walmart+ will offer a smaller assortment. The service comes with free same-day delivery on over 160,000 items, including groceries. Grocery delivery is the big selling point, and prices will be the same as in stores.

While the list of perks that come with Walmart+ will be limited at launch, Walmart plans to add more features as time goes on. "In the future, the company will leverage its wide-ranging strengths to add additional benefits for members in a variety of services and offerings," reads the press release announcing the launch.

The limited selection available for same-day delivery means that Walmart+ isn't an Amazon Prime killer. Instead of offering a Prime clone, Walmart is leveraging its base of thousands of stores and putting the focus on groceries. With the pandemic far from over in the United States, the bet on grocery delivery makes sense.

Shares of Walmart were up 6.1% by early Tuesday afternoon. The stock is now up around 24% since the start of the year.

Shares of Apple have been soaring this year, and the recent stock split has only added fuel to the fire. Multiple analysts raised their price targets on the tech stock Tuesday, despite a historically high valuation.

JPMorgan maintained its "overweight" rating on Apple stock and boosted its price target from $115 to $150. The bank expects the upcoming 5G iPhone to be a hit, raising earnings beyond expectations. JPMorgan also sees the work-from-home tailwind persisting.

Bank of America joined JPMorgan in raising its price target, although the bank is less optimistic overall. BofA maintained a "neutral" rating on the stock and bumped up its price target from $117 to $140. BofA analyst Wamsi Mohan warned that momentum was the driving force behind Apple's recent rally, and that the tables could turn later this year if Apple misses expectations.

While there's plenty of uncertainty surrounding demand for Apple's next batch of iPhones, Bloomberg reported on Tuesday that the company has asked suppliers to build at least 75 million 5G iPhones for this year. That's roughly unchanged from last year's launch.

Apple likely benefited from economic stimulus measures in the early stages of the pandemic. With no new stimulus bill close to passing Congress, the iPhone launch will be a good test of demand for Apple's products in a tough economy.