Please ensure Javascript is enabled for purposes of website accessibility
Log In Help Join The Motley Fool
Free Article Join Over 1 Million Premium Members And Get More In-Depth Stock Guidance and Research
By Adam Levine-Weinberg - Sep 2, 2020 at 8:21AM

It's not a good time to be a retailer with high exposure to the apparel market and no e-commerce business.

Ross Stores (ROST 2.29%) and Burlington Stores (BURL 4.53%) have achieved phenomenal success in recent years by breaking the perceived rules of modern retail. While most brick-and-mortar chains have invested aggressively in e-commerce, Ross Stores has never operated an online business. Burlington had a small e-commerce business but decided in early 2020 to shut it down for good.

The No. 2 and No. 3 U.S. off-price retailers could afford this old-fashioned approach because they were able to drive strong traffic to their stores with deep discounts and rapid inventory turnover. As a result, during a five-year period ending in late February, Ross Stores stock more than doubled and Burlington stock more than quadrupled, smoking the S&P 500's return. 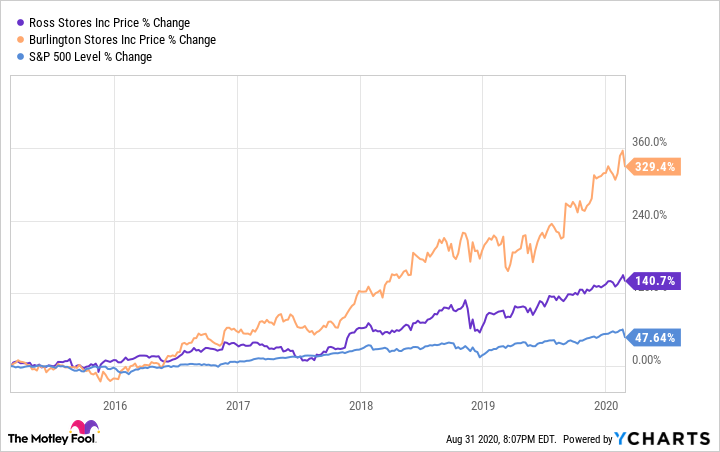 The COVID-19 pandemic changed everything, at least temporarily. That has put both off-price chains on the defensive this year.

A weak first half

Ross Stores and Burlington Stores closed all of their locations in late March because of the pandemic, leaving them with no sources of revenue. As it became clear that they wouldn't be able to reopen soon, the two companies furloughed the vast majority of their workers and implemented other expense reductions in early April.

As a result, Ross and Burlington both reported that sales plummeted 51% year over year in the first quarter, which ended in early May. They began to reopen their stores in mid-May and were able to get nearly all of their stores open again by the end of June.

By then, the damage was done. In late August, the off-price retailers reported big sales declines for the second quarter of fiscal 2020. Sales fell 33% year over year for Ross Stores and 39% for Burlington Stores. The discrepancy mainly related to how quickly the companies were able to get the bulk of their stores reopened. Comparable sales for reopened stores declined 12% for Ross Stores and 14% for Burlington.

Rapid swings in sales trends also made inventory management a tall task this year. Store closures caused all of the off-price retailers to end the first quarter with a glut of unsold spring inventory. This led to big inventory writedowns at the end of Q1. By late June, the glut had turned into an inventory shortage, as sales had outpaced expectations for reopened stores. It wasn't until July and August that Ross Stores and Burlington were able to bring in fresh goods in adequate quantities to meet demand.

Because of the volatility of sales trends and their impact on inventory valuations, earnings results for the first half of fiscal 2020 are more meaningful than the results for individual quarters. Ross Stores posted a pre-tax loss of $413 million (a -8.4% pre-tax margin) and a net loss of $284 million ($0.81 per share) for the first half of the year. Burlington's pre-tax loss for the same period was $649 million (a -35.8% pre-tax margin), and its net loss came to $381 million ($5.79 per share).

Burlington did not provide any kind of sales guidance for the third quarter, noting that trends had been very erratic. Ross Stores also declined to give formal guidance, but CEO Barbara Rentler said that comparable sales declined at a mid-teens rate in the first two and a half weeks of the quarter. It's fair to guess that Burlington is experiencing similar or greater sales pressure.

With a substantial number of consumers limiting or avoiding discretionary shopping trips because of the pandemic, store traffic is likely to remain quite weak for both off-price retailers. Adding to the headwinds, demand for fashion apparel is depressed right now. Thus, Ross Stores and Burlington Stores are likely to struggle until a vaccine is widely available.

When a vaccine does become available, Ross Stores and Burlington should bounce back quickly. Brick-and-mortar retail has a big cost advantage over e-commerce at the low price points typical for most items the two companies sell. As a result, deal-hunting consumers who have turned more to e-commerce during the pandemic are likely to flock back to off-price retailers when they feel comfortable visiting stores again.

Between Ross Stores and Burlington, the former looks like a better investment opportunity today. It has a much better balance sheet than its smaller rival, and its significantly smaller loss in the first half of the year highlights its operational excellence. Ross Stores has a lower valuation to boot.

That said, top off-price retailer TJX Companies may be the best of the bunch. It has high exposure to the surging home category through its HomeGoods and HomeSense chains, a small but growing e-commerce business, an equally strong record of operational excellence, and substantial room to grow despite its size. Still, between TJX and Ross Stores, long-term investors probably can't go wrong.