Shares of Carvana (CVNA 1.60%) were gaining again last month as the online used-car dealer delivered a strong earnings report, and investors were encouraged by surging demand in the used-car industry.

According to data from S&P Global Market Intelligence, the stock finished the month up 39%. As the chart below shows, it jumped early in the month on the earnings report, though it gave back some of those gains the next day before climbing steadily over the duration of the month. 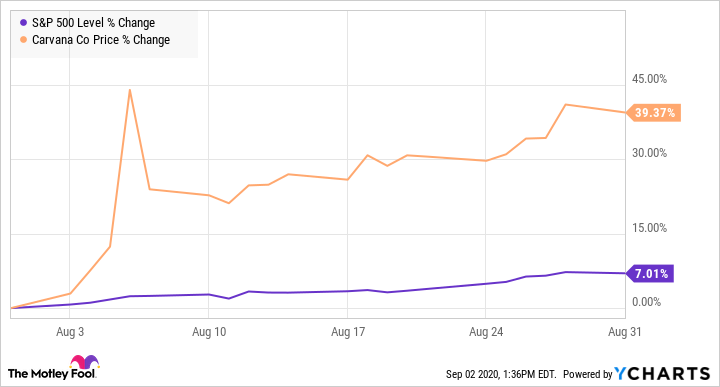 Carvana shares rose 28% on Aug. 6 after the company reported solid results during the lockdown-stricken second quarter and noted a strong rebound in consumer demand. Revenue rose 13% to $1.12 billion, which was short of estimates at $1.14 billion. Retail units sold were up 25% as the company sold lower-priced vehicles in the period, and management said sales ramped back up sharply in June after a lull during the lockdowns in April. 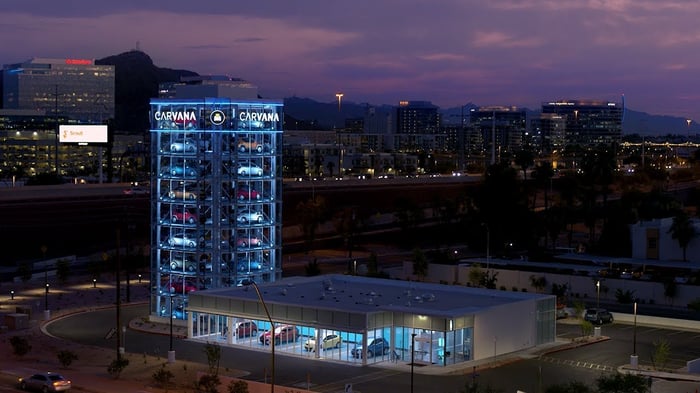 What seemed most encouraging to the market was that management said it was seeing unprecedented levels of demand at the end of the quarter, causing inventory constraints. CEO Ernie Garcia said, "The second quarter started at the peak of COVID-19 related economic disruption and ended with structural shifts in customer preferences leading to the strongest demand we have ever seen."

After big gains on Aug. 6, the stock fell back 14% the next day after Bank of America downgraded the stock from buy to neutral as analyst Nat Schindler said the risk/reward was more balanced at the current level. Nonetheless, a number of other analysts lifted their price targets on the stock following the earnings report.

Carvana did not offer a specific outlook for the third quarter, but said that revenue was growing by 40% toward the end of the second quarter and that sales remained strong in July, implying growth of 40% or more. Management also said it expected gross profit per unit to increase from the second quarter to the third as well as meaningful EBITDA margin improvement.

With demand elevated due to the pandemic, Carvana should see strong growth through the rest of the year. The stock has been one of the biggest winners on the market over the last few years, and it could keep gaining as the opportunity in used car sales remains massive.

Why Carvana Stock Is Plunging Today

Why Carvana Stock Was on the Rise Earlier Today