Clean Energy Fuels (NASDAQ:CLNE) initially jumped 10% today before reversing course. The shares are now trading down about 4% as of 1:15 p.m. EDT. 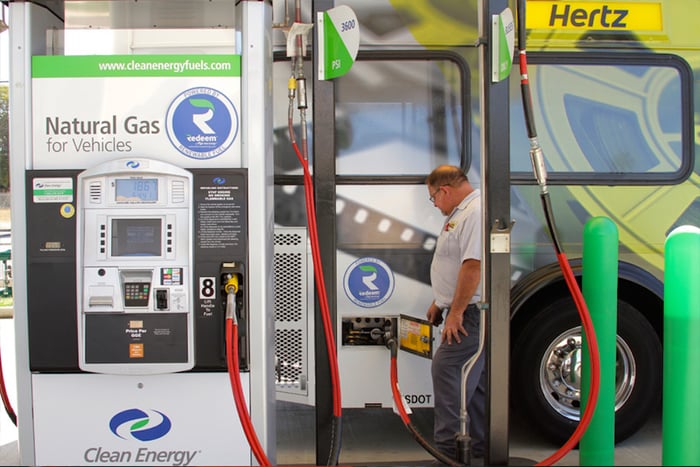 Many companies and municipalities are currently working on sustainability initiatives. Clean Energy Fuels operates approximately 550 natural gas fueling stations in the U.S. and Canada, and supplies them with a growing volume of renewable natural gas (RNG). RNG is a biomethane fuel made from organic waste sourced from farms and landfills.

Today it announced the New York Metropolitan Transportation Authority (MTA) has contracted it to provide RNG to power the city's 800 natural gas buses. The contract is a multi-year agreement for approximately 25 million gallons of the RNG product, which Clean Energy brands as Redeem. Clean Energy produced 143 million gallons of Redeem in 2019.

Clean Energy has seen Redeem's volume increase by 1,000% since it was first introduced in 2013. Natural gas transportation users include heavy-duty trucks, waste collection fleets, airport shuttles, package delivery fleets, and municipalities. "The MTA is a prime example of a major transit agency recognizing the environmental benefits and financial value of RNG," said Clean Energy president and CEO Andrew Littlefair. He added that the RNG option will help to improve air quality in the city.