Please ensure Javascript is enabled for purposes of website accessibility
Log In Help Join The Motley Fool
Free Article Join Over 1 Million Premium Members And Get More In-Depth Stock Guidance and Research
By Lawrence Rothman, CFA - Sep 3, 2020 at 6:00AM

The pandemic has taken a toll on Ulta Beauty's results. Where does the company go from here?

Ulta Beauty's (ULTA -1.50%) share price has rebounded nicely from its March lows, rising from under $130 on March 18 to almost $238 at Wednesday's close. However, it is still down about 6% for the year, and the company is still feeling the effects of its store closings early in the pandemic. In the second quarter of its fiscal 2021, encompassing the period that ended Aug. 1, same-store sales (comps) were down by 26.7% and adjusted operating income fell 74% from the same period last year.

Is this a temporary hiccup, or has the market changed forever, leaving Ulta Beauty behind? 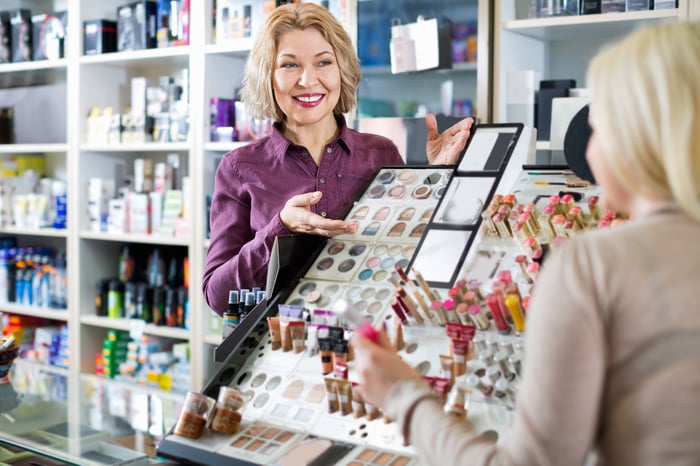 Ulta Beauty, founded in 1990, has produced strong results by offering many brands under one roof that appeal to a wide range of consumers. Previously, retailers only sold certain beauty products (cosmetics, skincare, fragrance, and haircare products), depending on the price point. Drug stores and mass merchandisers like Walmart sold lower-end products, and shoppers went to department stores for prestige products. Salons carried professional hair care products.

Ulta looks for "beauty enthusiasts" who are passionate shoppers. This is a good group to target since management states these make up 57% of the U.S. beauty shoppers, but 77% of the spending.

With about two decades of annual positive comps, Ulta is clearly accomplishing its goal of attracting customers. Last year, its comps increased 5%, and operating income grew by 6% to $901.1 million.

It is more than the company's strong history of executing that will get Ulta's results moving in the right direction, though.

First, the company started opening its stores to the public in May, and two months later customers had access to all of them. While it is limiting the number of customers, at least shoppers can see the products in person, which is important to many people. While the company has implemented restrictions on people sampling the products, its GLAMlab app allows them to try items virtually. This has resonated, with usage growing 150% from the first quarter to the second quarter. Management is also looking at other things, like single samples.

About a month ago, Ulta also reopened salon and brow services in most of its stores. With licensed stylists and estheticians who provide advice on things like hair, skin, makeup, and eyebrows, this helps draw customers into its stores.

Importantly, the quarterly comps improved throughout the quarter as the company allowed people back into the stores. They went from down 37% in May to a 10% decline in July, and a mid-single-digit fall for the first three weeks of August. This is good evidence that people are shopping at Ulta's stores again now that they have reopened.

Management has also been pushing an omnichannel strategy. As CEO Mary Dillon said on the second-quarter earnings call: "Omnichannel members are our most engaged and most productive members, historically spending 3 times more per year than store-only guests." Positively, its second-quarter e-commerce sales grew by more than 200%.

Ulta showed its confidence in the future by restarting its store opening plans in August. Last year, it added a net of 80 stores, bringing the total to over 1,250, and it brought the number to 1,264 stores this year before management put on the brakes. It plans to open 19 sites in the second half of this year. Ulta's long-term vision is to bring the total to 1,500 to 1,700 locations in the U.S.

With the stock price at lower levels, this looks like a good opportunity for you to invest in a company with strong growth prospects that is keeping pace with technological changes through digital offerings.