Please ensure Javascript is enabled for purposes of website accessibility
Log In Help Join The Motley Fool
Free Article Join Over 1 Million Premium Members And Get More In-Depth Stock Guidance and Research
By Mike Raye - Sep 3, 2020 at 7:43AM

The world's largest pizza chain is prospering during the pandemic. What are their plans to get a bigger piece of the pie?

For decades, Domino's Pizza, Inc. (DPZ -0.40%) has been synonymous with pizza delivery, and its business model is perfectly positioned for pandemic prosperity. Since the World Health Organization declared COVID-19 a global pandemic on March 11, Domino's has been delivering tasty returns for investors along with their pepperoni pizzas -- in part because its clever business model made it ready for the pandemic long before rivals could have a ghost of a chance playing catch-up. 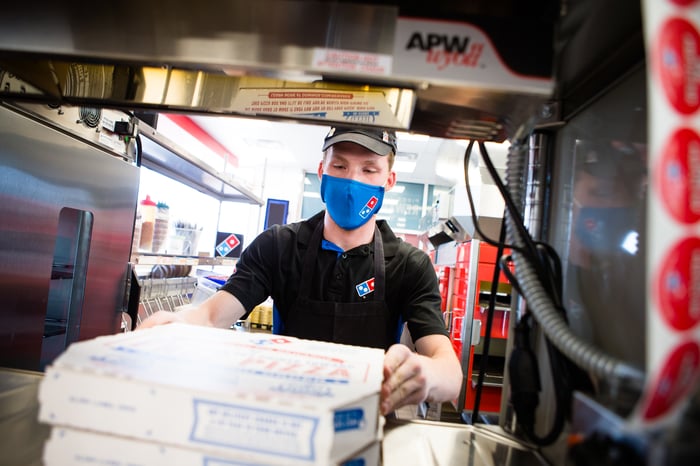 Domino's got it right from the time it opened its first franchise in Ypsilanti, Michigan in 1967, choosing to operate as a restaurant without in-house dining. Pizzas and other menu items are prepared in kitchens detached from dining rooms, called "ghost kitchens" in the food-service industry.

"Ghost kitchens" (also called "cloud kitchens") allow a restaurant chain to operate with low overhead — companies can strategically deploy their franchises as delivery hubs without worrying about whether the area they occupy lends itself to foot traffic. Pizza also travels well.

And speaking of travel, consumers just aren't heading out to local restaurants for a dine-in experience like they did pre-COVID, and investors know it. According to financial database PitchBook, over the course of the first quarters of this year, investments in ghost kitchen restaurants totaled $426 million. Independent delivery service DoorDash opened its first ghost kitchen in Redwood City, Calif. in 2019 and now serves six brands from the location. Restaurants have found the delivery model to be a lifeline during the pandemic, and it's highly unlikely they will ever abandon this new revenue stream.

Sure, rivals Papa John's International, Inc. (PZZA -0.36%) and Yum! Brands (YUM -1.23%) subsidiary Pizza Hut also delivers pizza, but as far as the ghost kitchen model goes, Domino's has been at it for more than half a century. Relative latecomer Papa John's, founded in 1984, also operates on the ghost kitchen model; Pizza Hut was historically associated with its red-roofed dine-in restaurants, but more recently switched a greater emphasis to delivery to keep pace with the changing industry. No matter how you slice it, Domino's was out of the oven far ahead of the competition.

Domino's sells more pizzas globally than any other chain, serving up 3 million pizzas to 1 million customers a day. At the beginning of 2020, it operated more than 17,100 stores in 90 international locations and brought in global retail sales of $14.3 billion in 2019.

Domino's looks strong right now -- and if recent history is any indication, that could remain true. In the seven years between 2012 and 2019, Domino's global revenue grew by 12% per year, and its global net earnings grew by 20% per year. Domino's returned almost $4.5 billion in dividends and repurchases to investors, too, according to the company's quarterly earnings reports.

The company's total revenue increased $108.4 million, or 13.4%, in Q2 2020, and net income rose $26.3 million, or 28.5%, Domino's said. In comparison, its closest publicly traded rival, Papa John's, announced global sales growth of 19.1% in the second quarter of 2020, and an increase of 28% in North America.  While those numbers look more impressive, keep in mind that Papa John's is making those gains off a much smaller base of existing sales.

This operational success has also delivered delicious returns for investors. Domino's stock has been on a steep upward track for the last 16 years. Investors who bought in on July 1, 2004 would have enjoyed a gain of more than 2,600% by July 1, 2020. 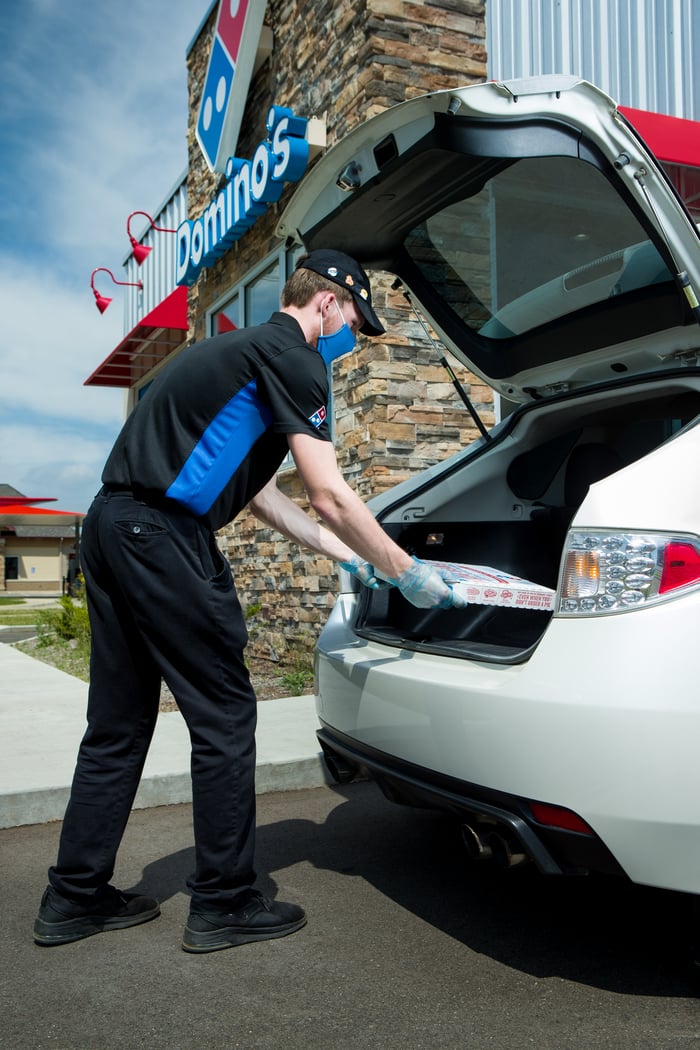 Domino's is showing no signs of slowing down. Already modeled for a pandemic business landscape, it has tweaked its methods to better serve customers in a COVID world. Back in July, it started "Carside Delivery" enabling customers to order pickup via its mobile app and select where they'd like the pizza delivered — to the trunk, the passenger seat or back seat.

For home deliveries, it offers contactless service, all driven by the Domino's mobile app. 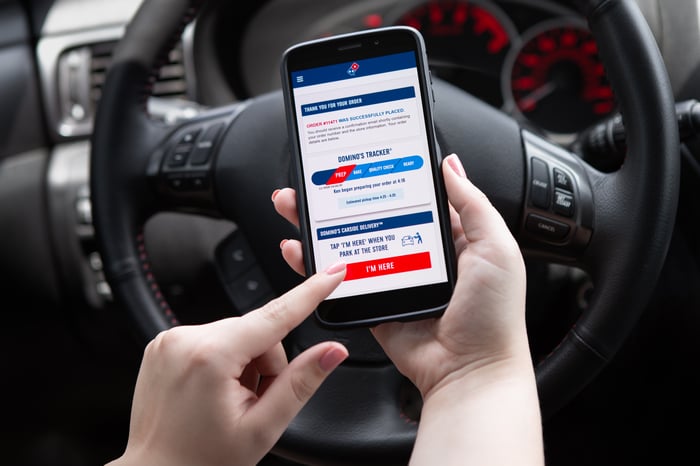 In Q2 2020 Domino's added 84 new stores (39 in the U.S.). The number includes reopening stores that were temporarily closed during the pandemic, it said in the quarterly report.

On Aug. 17 the company announced plans to hire an additional 20,000 employees including delivery drivers, pizza makers, customer service representatives, managers, and assistant managers. Supply chain personnel including warehouse workers and 18-wheeler truckers were also being increased to keep up with the company's expansion. The company did not specify whether these were temporary or permanent new hires.

How does Domino's plan to remain a player post-pandemic? In a word: China. Domino's also announced that, during Q2 2020, a subsidiary acquired a non-controlling interest in Shanghai-based Dash Brands Ltd., for $40.0 million. Dash Brands (not to be confused with DoorDash) is a privately held company that will become Domino's master franchisee in China. The company already established a foothold there, operating 300 stores in nine Chinese cities and growing at a rate of 30% over the last five years, according to Dash Brands CEO Aileen Wang in a press release announcing the deal July 21.

The deal with Dash Brands is designed to give Domino's plans to grow its China market a local foundation, but the Trump administration's ongoing trade war with Xi Jinping and an uncertain future for Chinese/American relations could seriously thwart Domino's plans, no matter how the November election turns. 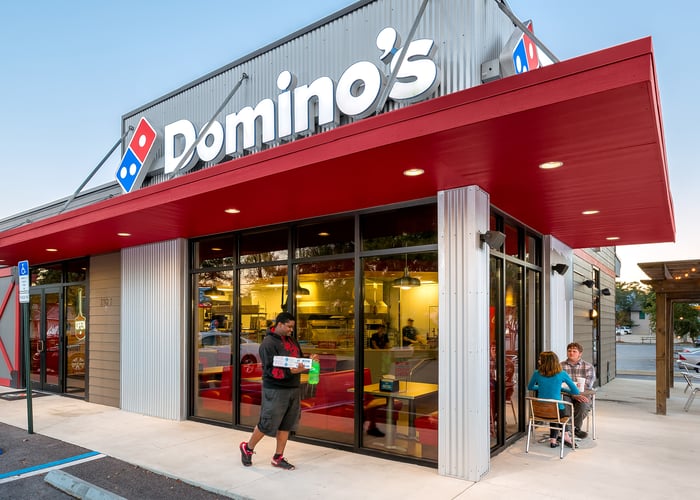 The pandemic and its accompanying lockdowns have put a premium on delivery-based models for everything from groceries to furniture to, well, pizza. In Q2 2020, shoppers spent $200.72 billion online with U.S. retailers — up 44.4% from the year-ago period.

Domino's has worked hard to become synonymous with pizza delivery, and as we have all adapted to having our needs met remotely and our needful things delivered to our door, Domino's is poised to profit in a post-pandemic world. Strategically placed ghost kitchens enable it to serve more customers, maintain its market share, and remain the primary pizza purveyor.

For investors, it's advisable to remember this pizza truth: Domino's delivers.

Buy the Pivot, Not the IPO