Please ensure Javascript is enabled for purposes of website accessibility
Log In Help Join The Motley Fool
Free Article Join Over 1 Million Premium Members And Get More In-Depth Stock Guidance and Research
By Rich Duprey – Sep 3, 2020 at 10:30AM

The supermarket giant may be new to the public markets but it has a long history of growth.

Peter Lynch was one of the greatest money managers of all time, taking Fidelity Magellan from $20 million to $13 billion in 13 years and averaging 29% annual returns over that period. An investor could do worse than picking stocks Peter Lynch would love.

The investing legend laid out what he looked for in a stock in two of the best investing books ever published, One Up on Wall Street and Beating the Street, and there's good reason to think Albertsons (ACI -1.17%) might be a company Lynch would appreciate. Let's see why. 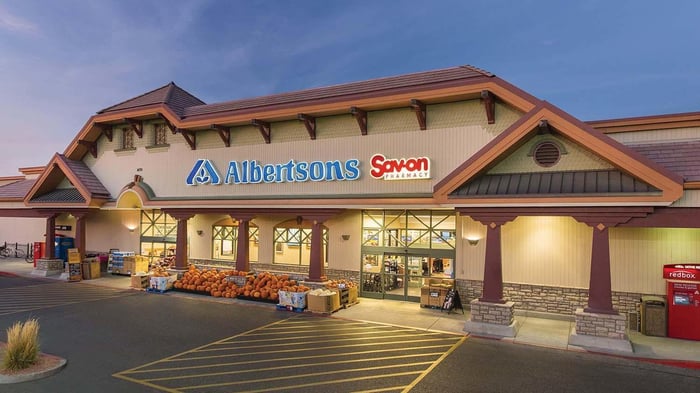 Lynch loved dead-simple businesses, and one of his favorite maxims was "Never invest in an idea that you can't illustrate with a crayon." Supermarkets are one of those easy-to-understand businesses, which is why Walmart (WMT -0.65%) is a company he regretted not buying.

Albertsons, which was taken private in 2006, is the country's second largest pure-play grocery store behind Kroger (KR -1.69%) with over 2,250 supermarkets in 34 states. In addition to its namesake chain, Albertsons also operates Safeway, Acme, Vons, and nine other brands.

Lynch was also a fan of buying stocks that offered growth at a reasonable price. Albertsons trades for just under six times earnings and less than 10 times next year's estimates, yet it is expected to grow profits 13% annually over the next five years, or more than twice the rate of Walmart and Kroger.

It goes for a minuscule fraction of its sales and four times the free cash flow it produces, or about a tenth of Walmart and half that of Kroger.

Fiscal first-quarter sales jumped 21% to $22.8 billion driven by a 26.5% surge in comparable-store sales. Its stock fell, though, over fear that the stockpiling of goods consumers did early on in the pandemic is easing, which could slow revenue growth.

Yet Albertsons should benefit from the investments it has made in its digital platform. Online sales rocketed 276% higher during the quarter as consumers who never purchased groceries online before tested it out during the lockdown.

It expanded curbside pickup to 731 stores, and it offers its own delivery option at nearly 65% of its locations. Combined with third-party providers, delivery covers 90% of its stores. Albertsons also installed "micro fulfillment centers" at two stores to help with online orders, and it plans to have another 10 operational over the next two years.

Private-label goods are another growth opportunity, and it plans to launch about 800 new items annually in its Own Brands category over the next few years. Four of those brands, including its O-Organics brand, exceed $1 billion in annual sales.

Every investment has risk

Albertsons' discounted valuation is likely tied to it having a lot of debt. It ended the fiscal first quarter with almost $8.5 billion in debt and another $5.4 billion in long-term lease obligations. Interest payments on the grocery chain's debt were $180 million, though that was down from $225 million last year.

The supermarket giant is also controlled by its sponsors that helped it go public: Cerberus Capital Management, which gets to appoint four directors to the board; Kimco Realty; and several other companies that combined will own 73% of Albertsons.

Continued consolidation in the healthcare industry could also pressure pricing and profitability since it operates over 1,720 pharmacies. Albertsons had tried to acquire Rite Aid in 2018, a deal that ultimately collapsed.

Lynch recommended investors buy what they know, but to also know why they own it. That means don't buy a stock blindly with no research of your own. Albertsons looks like it has many of the earmarks that the famed investor would look for. Now is the time to start your due diligence.