Volatility has come fast and furious yet again.

The stock market has made volatile moves in 2020, and the last two days have been a whirlwind. After rising to record highs on dozens of occasions, the Nasdaq Composite (^IXIC -3.55%) is on the cusp of completing a 10% correction in less than two days. Shortly before noon on Friday, the Nasdaq was down almost 3%, after having been down as much as 5% earlier in the session. The day's low brought the index to within 10 points of an official 10% drop from its all-time intraday high.

Many investors have complained that with stocks moving straight up, there hasn't been a good time to buy. Yet when a correction like the current one comes, it can be just as hard to buy. Below, we'll look at some stocks that are down quite a bit more than 10% and see whether it makes sense for long-term investors to pull the trigger now. 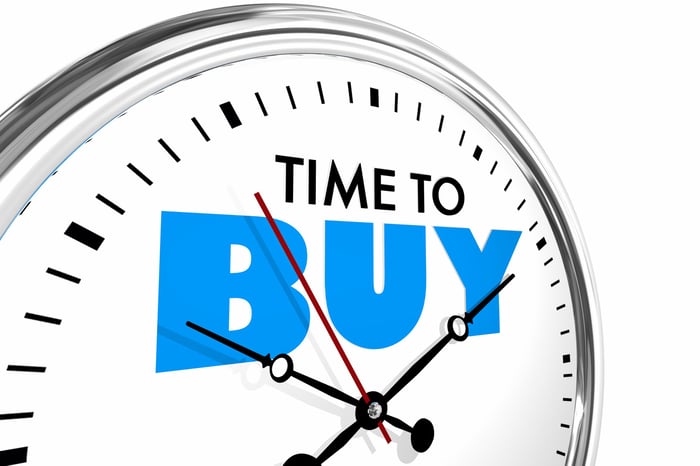 If you like getting stocks at a discount, here are some thoughts to consider:

These are just a few of the stocks that have been hit hard during the current correction. Yet if you really like these companies, then the buying opportunities they're giving you now should make you excited, not scared.

What if they keep going down?

The problem with investing in down markets is that nobody ever tells you exactly when a stock is going to hit rock bottom. Even when you're buying with a time horizon measured in years, it hurts psychologically to see a stock you've just bought lose more value right after you pull the trigger. It's almost impossible not to second-guess yourself and wish you'd just had the discipline to wait.

The way to get over that fear is to realize the consequences of not buying. Sure, you might see the stock go lower and be able to buy shares even more cheaply. But what happens more often is that you never get around to buying the stock. The price usually rises, whether the same day or further into the future, and then you feel like a real idiot for missing out. That leaves you waiting for another pullback, which often doesn't happen until the stock price is much, much higher.

Take a good deal when you see one

The best investors will tell you that when you have an opportunity to buy shares of a great company at a reasonable price, you shouldn't hesitate. You simply have to accept that the ups and downs of the market won't let you time your purchases perfectly.

If you have stocks on your watch list -- whether they're high-growth tech stocks or ones in a different industry entirely -- take a close look at them right now. If they've fallen from recent highs, it might be the perfect time to add a few shares and see what happens next. Over the long run, you'll likely be happy you did.