These three stocks have consolidated their strong competitive positions in recent months.

As the pandemic grinds on, companies that make diagnostic tests for SARS-CoV-2 are working overtime to meet immense demand and invent superior products. Though there are several different types of coronavirus tests, and a handful of different business models that operate in the wider medical diagnostics space, there's no single profile that describes a successful manufacturer of coronavirus assays.

Let's take a look at three investment-ready testing companies that have flourished since the start of the pandemic. 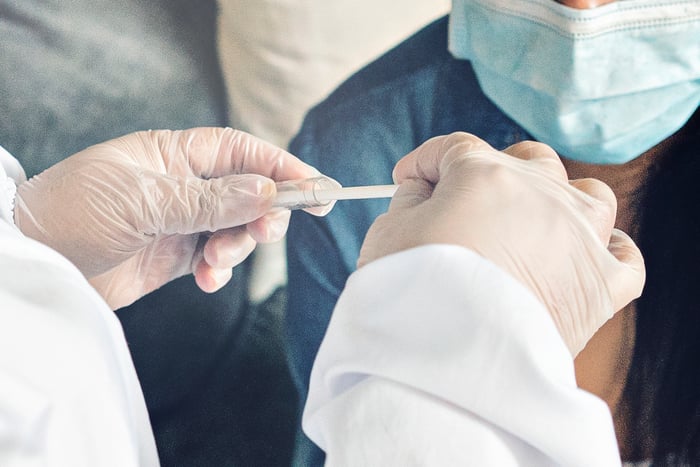 The venerable Quest Diagnostics (DGX 0.03%) manufactures and develops swab tests for active coronavirus infections, blood-based antibody assays, and a cornucopia of other medical assays. As with several of its peers, the company's stock has cooled from its highs in early August. But Quest has a large market share in testing that it doesn't need to fight to maintain, and the stock's recent retreat doesn't change that. For clinics that don't have a laboratory on-site, sending their samples to be processed at a Quest facility might be their only choice.

In July, the company reported that its facilities were running 135,000 tests for active infections and 200,000 antibody diagnostics per day, accounting for up to 20% of the coronavirus test processing market in the U.S. Quest also processes a handful of coronavirus diagnostics produced by other major manufacturers, so it doesn't need to sell tests to keep earning revenue. As testing volume rises worldwide, Quest is thus strongly positioned to increase its revenue.

Hologic (HOLX -1.19%) makes two coronavirus testing products, both of which are intended to diagnose active infections. Right now, Hologic is making more than 1.5 million of these diagnostics per week, all of which must be processed on the company's hardware once clinicians have taken samples from patients. This mass-scale manufacturing led revenue from the company's molecular diagnostics segment to rise 170% year over year to reach $460.3 million in the third quarter, far surpassing its internal projections.

Critically, Hologic's Panther machines for sample processing are selling like hotcakes as hospitals scramble to build up their testing infrastructure. The company claimed that it had deployed a total of 2,000 Panther instruments worldwide as of August, an increase of 200 from May's total of 1,800. This means that in five months, as a result of the pandemic, Hologic sold nearly as many Panthers as it did in all of the prior year -- and Panthers run only Hologic tests. In short, Hologic's core business is growing extremely rapidly, and its earnings reports will likely buoy the stock as the market recognizes the company's value.

Quidel Corporation (QDEL) develops diagnostics intended for use at the point of care in outpatient clinics and doctors' offices. This means that its business model emphasizes tests which physicians can read with a small Quidel device, rather than diagnostics which need to be sent to a central processing laboratory like Quest.

Quidel has three diagnostic products for the novel coronavirus, all of which detect an ongoing infection. Its SARS Antigen FIA (fluorescent immunoassay) is capable of delivering results in around 15 minutes, making it a natural choice for clinics that already use the company's Sofia analyzer device. In fact, the company attributed its 86% year-over-year increase in second-quarter sales volume to the assay's popularity.

On July 31, Quidel announced that it had signed a $71 million agreement with the National Institutes of Health (NIH) to upgrade its manufacturing capacity for these rapid tests. Per the agreement, the company will increase its output from 84 million units to more than 220 million units per year by July of 2021 -- a rise of 162%. With the government paying Quidel to produce more of one of its most popular products, it's a no-brainer that its earnings should bounce upward over the next year.