In its quarterly scorecard, Calavo revealed a significant year-over-year revenue decline of nearly 25% to $270 million. In addition, the organization recorded a diluted per-share loss of $0.89 versus a profit in the prior-year quarter of $0.60. Given such a seemingly weak top- and bottom-line showing, let's break down below why investors were so sanguine about Calavo's prospects following the report. 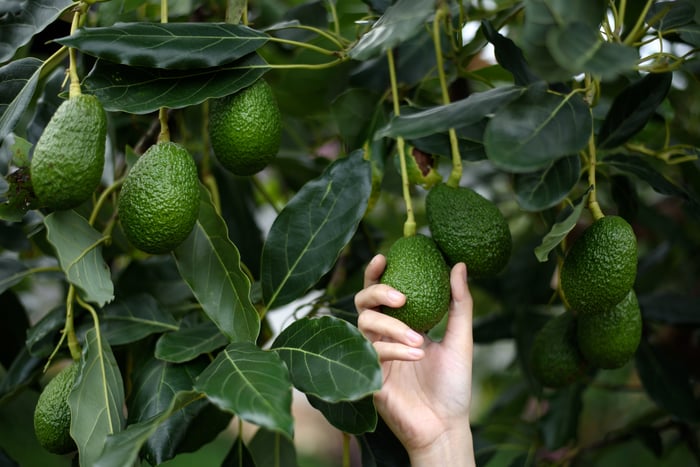 Calavo Growers' largest business, the fresh segment, saw sales dip 22% versus the third quarter of 2019, to $162 million. This chiefly occurred because avocado selling prices declined industrywide, due to a strong harvest in California and rising imports from Peru and Mexico. Fortuitously, Calavo was able to partially offset this impact with a vigorous 18% increase in volume. Thus, gross margin slipped just 130 basis points, to 10.9%.

In the company's Renaissance Food Group (RFG) segment, sales fell 29% versus the comparable period, to $91 million. Management attributed the faltering revenue to the previously announced closure of a Midwest co-packing partner in March and lower demand for short shelf-life products courtesy of COVID-19.

However, profitability increased as manufacturing margins improved, particularly in Calavo's newest facilities in the Pacific Northwest and Georgia. RFG's gross margin jumped 300 basis points to 8.9%, despite the top-line slump. The company indicated that volumes in this business were beginning to trend higher in July, and also past the quarter close into August.

Calavo's smallest segment, foods, also generated more robust profitability, even as its institutional foodservice customers pulled back as the pandemic continued, leading to a 27% year-over-year revenue decline to $19 million. Yet gross margin soared more than 15 percentage points versus the prior-year quarter to 26.3%. Management attributed this rise to manufacturing-process improvements in this segment that were completed last year.

Among Calavo Growers' three segments, total company gross margin increased 150 basis points to 11.4%. That the seller of avocados and other select fruits and vegetables could pull off this margin advance on a 22% sales hit bodes well for future profits once volume picks up.

Walking away from a troubled investment

Calavo's higher gross profitability, combined with operational expense discipline during the quarter, helped it absorb most of its sales troubles -- operating income fell only $4.1 million versus the third quarter of 2019, to $17.5 million. But the company took a non-cash charge of $37.2 million during the period, which created a net loss of $15.6 million and the per-share loss mentioned at the outset of this article.

The huge charge against earnings stemmed from Calavo's writedown of its note receivable from non-consolidated subsidiary FreshRealm, LLC, as well as an impairment charge on its investment in this entity. FreshRealm is a small provider of meal kits and packaged foods, and Calavo Growers had considered its investment in the start-up as a promising means to benefit from growing consumer interest in meal kits and at-home food preparation.

But after several quarters, it's become clear that FreshRealm hasn't been able to grow its nascent business and is incurring steep losses. Calavo wrote down its $34.2 million note receivable from FreshRealm, $200,000 in trade accounts receivable, and its entire remaining equity investment of $2.8 million. In short, the company has completely walked away from its interest in FreshRealm.

Investors seemed relieved that management is cutting the company's losses and avoiding throwing good money after bad by undertaking any further investment.

Calavo's new CEO James Gibson, who previously ran Calavo's RFG business, took over the reins in February of this year -- an interesting time, as he was immediately faced with dealing with the growing pandemic. This quarter, the company provided some details on the first strategic changes the new CEO intends to make.

In addition to several initiatives in each segment designed to improve product penetration and increase manufacturing efficiency, Calavo announced that it's centralizing support operations in its three major segments. The consumer staples specialist stated the following in its press release: "The reorganization aims to streamline the business by consolidating sales functions under one umbrella to serve all customers and maximize cross-selling opportunities; eliminating the redundancies across three business segments; and establishing centralized leadership in finance and operations."

In other words, while Calavo Grower's emphasis on gross profitability was apparent in its results this quarter, progress is still anticipated on the revenue front via a more cohesive sales strategy. Targeted operating expense savings may also impact the profit and loss statement in the coming quarters.

This has been quite an anomalous year, but so far, Calavo Growers has adapted admirably.