The vast majority of retail brands that sell non-essential items experienced double-digit declines during the coronavirus pandemic, including industry leaders such as Nike and Hasbro. Cosmetics leader Estee Lauder (NYSE:EL) didn't escape its own massive decline in the three-month quarter ended June 30.

Yet despite the 32% fourth-quarter drop, Estee Lauder's otherwise strong showing for fiscal 2020 allowed the company to end the year with just a 4% sales decline. In fact, sales jumped 11% in the third quarter ended March 31, which included shutdowns and recoveries in Asia and two weeks of lockdowns in the U.S. During that time, Asia drove the increase with a 25% rise in sales, while the Americas decreased 2%. 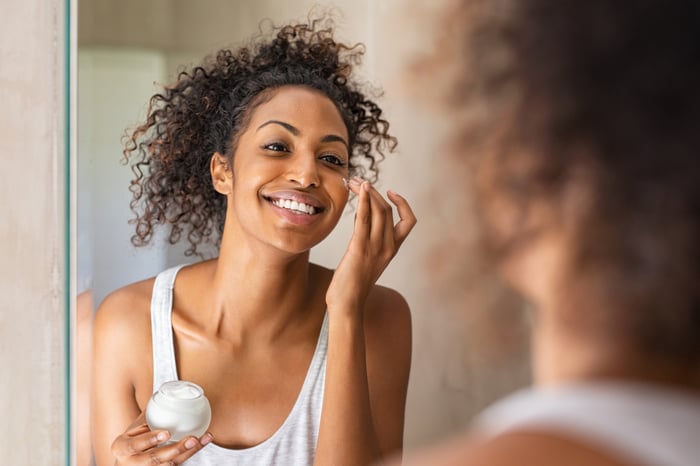 Skincare has become the company's strongest segment and grew 3% in constant currency during the fourth quarter, while makeup, fragrance, hair care, and the company's "other" category all saw big decreases. Skincare remained important as people focused on hygiene under lockdown, while makeup and hairstyling became less relevant as more people worked from home. These factors contributed to a $1.28 loss per share. For the full year, the Estee Lauder and La Mer skicare brands brought in double-digit sales growth, and La Mer and By Kilian had increased makeup sales. Hair care products were particularly impacted by hair salon closures.

As for the future, Estee Lauder plans to close between 10% to 15% of unproductive stores as well as certain department store beauty counters, and it expects the sales decline to improve to 12% to 13% below the prior year in the first quarter of fiscal 2021.