Please ensure Javascript is enabled for purposes of website accessibility
Log In Help Join The Motley Fool
Free Article Join Over 1 Million Premium Members And Get More In-Depth Stock Guidance and Research
By Will Healy - Sep 9, 2020 at 8:15AM

Investors may not have priced valuation and competitive challenges into the stock.

Shopify (SHOP -1.18%) mystified investors for much of the year. Even at the depth of the bear market in March, this tech stock appeared expensive. Today, it trades at more than triple that price. Shares recently rose to record levels as its e-commerce partner Walmart introduced Walmart+. Shopify will likely benefit from this offering as some of its merchants now list products on Walmart.com.

However, since hitting an all-time high in early September, the stock has lost close to 20% of its value as of the time of this writing. Still, it trades at levels first seen in late June. Now, investors have to decide whether the upside has paused temporarily or if the stock is set up for a massive drop?

Shopify's forward price-to-earnings (P/E) ratio of about 476 speaks to how expensive the stock has become. Moreover, the fact that Shopify stock sells for almost 61 times sales confirms this sky-high valuation. The average price-to-sales (P/S) ratio for the last five years stands at about 21.

Massive growth in the company's stock price fueled this multiple. In March, it fell to about the $300 per-share range in a market sell-off. As the market recovered, it went on a tear, surging almost to $1,150 per share by early September. 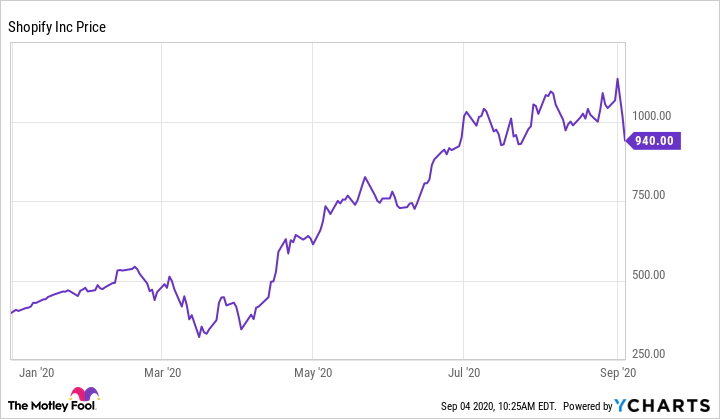 Indeed, the company has logged impressive growth over the last year. According to the latest quarterly report, gross merchandise volume spiked by 119%, while revenue rose by 97% from year-ago levels. This helped to make the company profitable, reporting $0.29 per share in profits compared to a net loss per share of $0.26 in the same quarter last year.

All this occurred amid COVID-19-related shutdowns. The pandemic has helped as retailers scrambled to take their catalogs online. New store creation grew by 71% between the first and second quarters of 2020. The fact that Shopify temporarily extended its trial period from 14 to 90 days may have facilitated some of this growth. 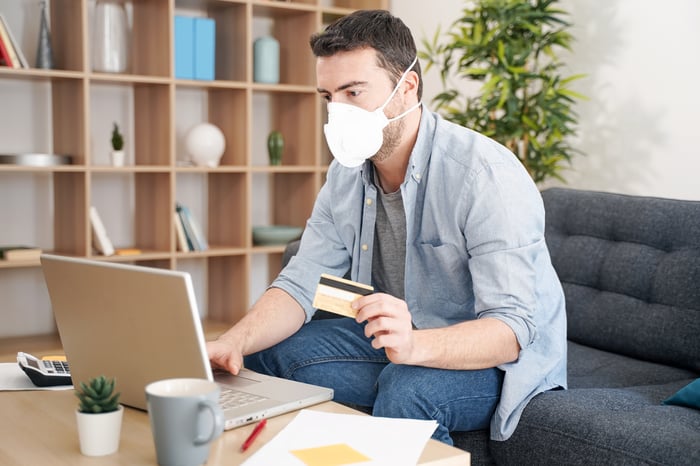 Shopify and the competition

The earnings increases should continue. Businesses continue to offer e-commerce options in increasing numbers. According to Grand View Research, the global business-to-consumer e-commerce market attained a value of $3.35 trillion in 2019. It forecasts a compound annual growth rate (CAGR) of 7.9% through 2027.

Moreover, many shops may prefer to run their platforms independent of Amazon or platforms such as Etsy. That is where Shopify can help.

However, it might come as a surprise that Shopify is not the number one platform in the U.S. According to Oberlo, about 23% of businesses turn to WooCommerce, an open-source plugin on WordPress. Shopify is a close second at 21%. At 15%, Wix Stores is the only other platform with a double-digit market share. Several other players, including Abobe's Magento, register a minimal percentage of the U.S. market.

With investors are paying almost 60 times sales for a company that is not first place in its industry, anything could happen with Shopify stock. Still, at its current multiple, Shopify has reached a point where investors may have to wait years for long-term returns.

Also, should a sell-off take Shopify stock back to its average P/S ratio, new buyers would lose close to two-thirds of their initial investment.

Although the end of COVID-19 will temporarily slow the move to e-commerce, retailers of all sizes will almost certainly continue migrating to e-commerce. I expect Shopify to remain a major player in that industry. However, at some point, valuation matters, and even the most risk-tolerant investors should think twice before buying at these levels.