The third is the main reason I'm not selling a single share.

Enjoying the roller-coaster of the past week in the stock market? For shareholders of cyber-security firm CrowdStrike (CRWD 5.46%), the ups and downs have been pronounced -- hitting an all-time high prior to its earnings release...only to see shares lose over 20% in the subsequent week.

When that happens to a high-growth stock like CrowdStrike, you might think there was some ugly detail lurking in the press release. But as you'll see below, I don't think that's the case at all. In fact, if it wasn't already more than 5% of my portfolio, I'd be adding shares in the sell-off, and three simple charts tell the story of why. 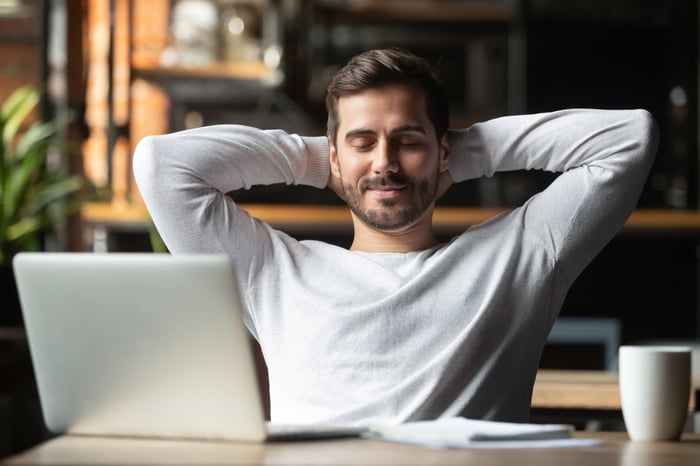 For those unfamiliar, CrowdStrike is one of the first cyber-security firms to be entirely cloud-native. There was no migration from legacy (think, old and clunky) systems to the cloud. That, plus the company's ability to benefit from a staggering network effect, has led to rapid adoption of the company's services. 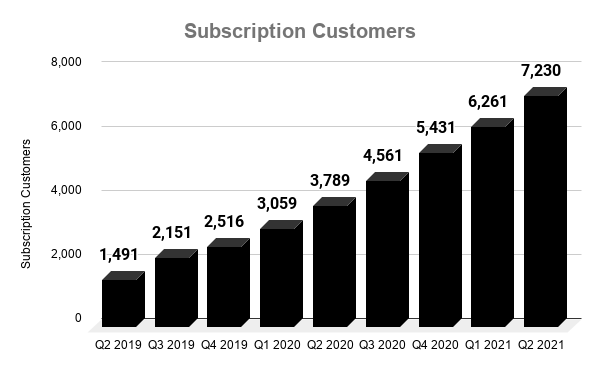 As you can see, CrowdStrike is having no problem winning over customers. As businesses around the world adjust to the COVID-19-induced reality of e-commerce and work-from-home, they have flocked to the company to ensure all of their operations are secure.

But when customers sign on with CrowdStrike, they don't just sign up for one single product. There's a stable of ten different "modules" to choose from. These modules can be organized into three broad categories: Endpoint security (three modules), Security and IT (four modules), and Threat Intelligence (three modules).

I love such software-as-a-service (SaaS) models -- they score very well in my own investing framework. With each additional subscription module a customer uses, the moat around CrowdStrike grows, the amount of data it captures increases, and the ability to create ever more modules based on that data expands. In short, those customers get locked in for life.

But how many modules are these customers using? In its short time as a public company, management has given periodic glimpses into this dynamic. 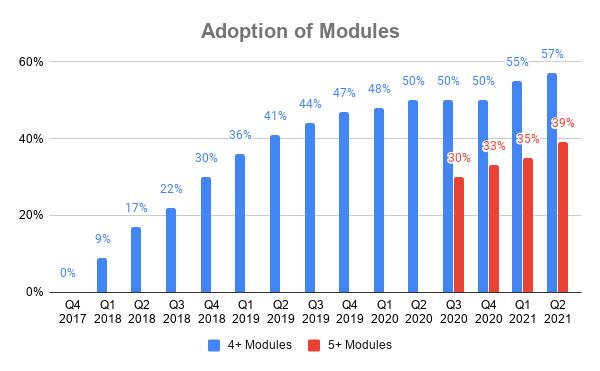 At first blush, this might seem disconcerting: CrowdStrike had no problem getting rapid adoption of more than four modules from fiscal 2017 to the middle of fiscal 2019. But since then, things seem to have stalled a bit. Is this a problem?

In a word, "No." This is not a problem at all. That's because we have to combine the two previous charts to get a clearer picture of the rapid adoption of multiple modules by CrowdStrike customers.

Think of it this way: The 50% adoption rate holding steady from the second quarter of 2020 to the fourth quarter appears to show little progress. But when we consider that the number of customers increased 43% during that timeframe, we see incredible growth in this cohort. Here's what the numbers look like over time. 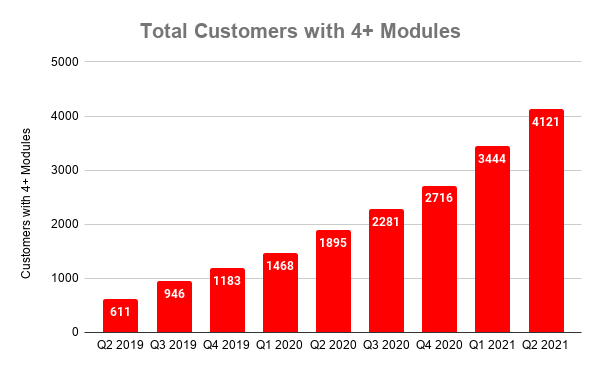 Calculations and chart by author. Data source: SEC filings providing the total number of customers and percentages. Actual numbers may differ slightly based on rounding.

For those keeping track at home, here's what this means: The number of customers with four or more modules (read, those least likely to leave the company via high switching costs) has been increasing by 160% over the past two years.

Full stop. Let that sink in. That means a doubling has occurred roughly every nine months! I don't think that trend will last forever -- such figures are otherworldly. But it underscores why I don't plan to sell a single share...and think you, too, should think twice before doing so.

That said, it can be disconcerting to see the stock sell off so quickly over the past week. Some of that has to do with the broader market -- particularly the NASDAQ Composite -- selling off 9% in just over a week.

But part is due to tepid guidance from management as well. While revenue grew 84% in the second quarter, it is expected to fall to a range of 50% by the fourth quarter. That's still impressive growth -- but it also represents a significant deceleration.

On that front, I think management is just being wise -- essentially under-promising and over-delivering. In fact, on the conference call, CFO Burt Podbere had this to say:

We are maintaining our pragmatic outlook regarding the uncertain global macroeconomic backdrop and have prudently maintained our higher assumption for contraction and churn for the remainder of the year, even though we have not seen significant increase in this metric to date. [Emphasis added]

To my ears, that's Wall Street speak for: We just want to make sure our shareholders aren't surprised if COVID-19 (or something else) suddenly makes things worse. As a long-term shareholder, such things don't bother me at all -- and if you have a similarly long time horizon, they shouldn't bother you, either.