Last week's stock market action was far from reassuring. That's what made Monday's start so important, and market participants were able to take a breath of fresh air as the new week opened on an upbeat note. Shortly after 10 a.m. EDT, the Dow Jones Industrial Average (DJINDICES:^DJI) was up 339 points to 28,005. The S&P 500 (SNPINDEX:^GSPC) gained 53 points to 3,394, and the Nasdaq Composite (NASDAQINDEX:^IXIC) picked up 229 points to 11,082.

One of the biggest stories lately has involved Chinese social media company ByteDance and its popular TikTok app. After facing criticism from U.S. regulators, TikTok has sought to take strategic action to protect the value of its lucrative asset. That pitted several potential buyers against each other, and over the weekend, it became apparent that Oracle (NYSE:ORCL) has the upper hand over Microsoft (NASDAQ:MSFT) and Walmart (NYSE:WMT) in inking some kind of deal with ByteDance. 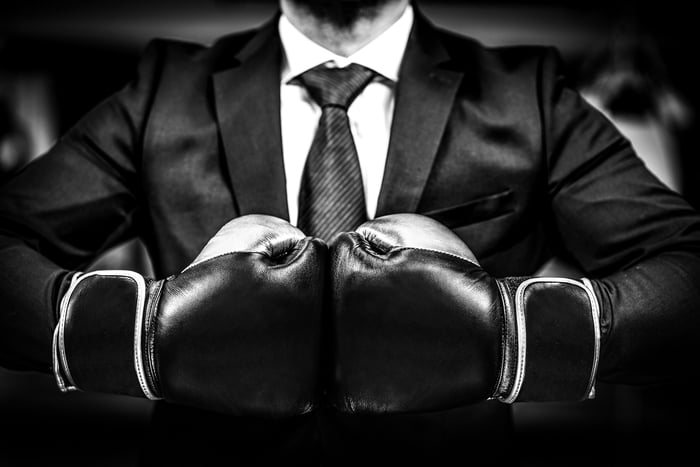 Microsoft informed investors of the fate of its efforts to buy TikTok on Sunday. In a simple corporate blog post, Microsoft said that ByteDance told the software giant that it was rejecting Microsoft's offer to buy TikTok's U.S. operations.

Microsoft defended its efforts, saying that it believed that its proposal would have been good both for TikTok users and for national security. It argued that it would improve TikTok in areas including security, privacy, online safety, and information accuracy. In light of the rejection, Microsoft said it would "look forward to seeing how the service evolves in these important areas."

The news didn't seem to affect Microsoft too much. Its shares were up almost 2% Monday morning.

TikTok's decision to exclude Microsoft seems to leave the field open for Oracle. But what a final deal might look like for the tech giant is far from clear at this point.

At first, it seemed as though ByteDance might look for someone to buy TikTok outright. That approach appeared to gain favor with the White House, which had pressured the Chinese company by forcing U.S. companies not to do business with TikTok. However, China didn't like the idea of a full sale of the video app.

It now appears that Oracle might merely provide substantial cloud services under a joint venture with TikTok's U.S. operations. That would arguably satisfy both the U.S. and Chinese governments. It would also win over ByteDance's cloud business from Alphabet (NASDAQ:GOOG) (NASDAQ:GOOGL).

There might also still be room for Walmart to join Oracle. Walmart issued a statement saying that it continues to have interest in an investment in TikTok.

It's too early to tell exactly what will happen as negotiations between ByteDance and Oracle proceed. Yet given how popular the video app has become, there'll be big opportunities for whoever emerges as winners in any potential deal.