Under the right conditions, this software-as-a-service company could be a persuasive long-term buy.

September has brought on increased market volatility versus the summer, and in response, many investors are likely dusting off their watch lists for potential purchases if recent selling persists. One technology stock I'm monitoring is Smartsheet (SMAR 2.58%), a provider of cloud-based project management and task automation software.

Smartsheet reported its fiscal second-quarter 2021 results on Sept. 2, and shares have taken a 21% haircut since then, primarily due to a slightly larger loss versus analysts' expectations, and a difficult market environment. Even after its pullback, Smartsheet's stock still seems pricey to me, currently trading at 15 times forward one-year sales.

Nonetheless, I'm intrigued by a few trends in the software-as-a-service upstart's results. Revenue growth is one (the company's top line soared 41% year over year to $91.2 million), but given its premium share price, the market already recognizes Smartsheet's growth potential. 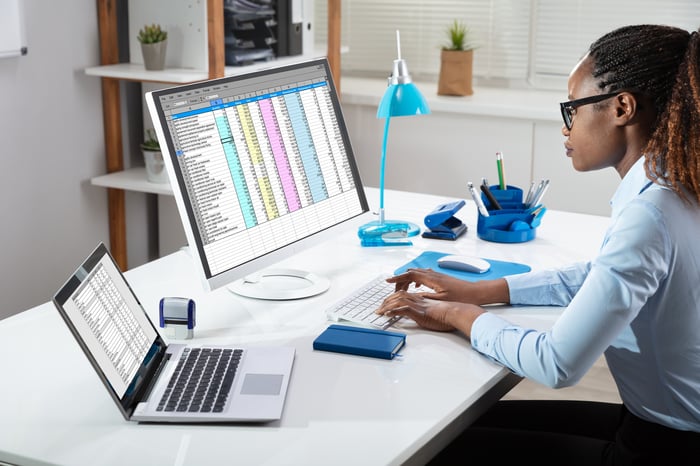 Of these three figures, the last (potentially overlooked by some) is intriguing, as it illustrates that Smartsheet boasts an extremely robust and expanding base of entry-level customers. This cohort should furnish a stable recurring-revenue base for years to come. Of course, it's vitally important to build relationships with larger, enterprise customers. And impressively, Smartsheet appears to enjoy significant penetration in both the high end and low end of tranches of customer ACV.

Another promising advantage that's emerged in a pandemic year is the ease with which Smartsheet's platform can be adapted to new use cases. Customers are benefiting from Smartsheet's remote work-friendly task management features while using its new COVID-19 response portal (which helps businesses put their response to the pandemic into operation).

The company is also seeing increased uptake of its products for federal, state, and local governments. Together, these trends are pushing up usage stats. According to CEO Mark Mader, the company added 500,000 new users in the second quarter -- its largest sequential addition in eight quarters. This has positive implications for growth.

The trajectory of billings (recorded revenue plus the change in deferred revenue) has played a role in constraining Smartsheet's share price this year. While many fellow software-as-a-service companies have soared in 2020, Smartsheet's stock has appreciated just 4% year to date. Investors have turned cautious as year-over-year billings growth has curbed considerably over the last three quarters, from a rate of 58% in the fourth quarter of fiscal 2020, to just 22% in the second quarter of fiscal 2021.

However, the second-quarter rate exceeded management's guidance of 15% to 17% growth. Smartsheet projects that third-quarter billings will accelerate further, to between 25% and 27% against Q3 2019, which should provide evidence of a nicely firming trend.

As for risks, in the next few quarters, shareholders would certainly like to see Smartsheet's cash burn alleviate. The company posted negative free cash flow of $27.6 million in the first two quarters of fiscal 2021, a widening of roughly $13 million versus the prior-year period.

Red ink on the cash front isn't an immediate concern since the company held $389 million of working capital on its books at the end of the second quarter, against zero long-term debt. But this cash cushion will diminish somewhat given Smartsheet's acquisition of digital asset management start-up Brandfolder, which was completed after quarter-end, on Sept. 14. Management had previously advised investors that Smartsheet would use roughly $124 million of cash on hand to fund the closing.

Cash losses are being driven in part by aggressive sales and marketing expense. This line on the income statement has expanded by 45% in the first six months of fiscal 2021, in tandem with an overall revenue increase of 46% during the same period. Clearly, the company is presently focused on capturing market share versus profitability -- it's generated a net loss of $54.3 million on $176.7 million in revenue in the first six months of fiscal 2021.

In sum, while I'm not in a hurry to buy Smartsheet at its current pricing, I'll have a keener interest if it sells off a bit more, and if next quarter's results show a firming billings trend coupled with a more moderate cash burn. But the company's agile platform boasts several advantages that aren't difficult to admire today.

Why Smartsheet Shares Are Skyrocketing Today
409%