Please ensure Javascript is enabled for purposes of website accessibility
Log In Help Join The Motley Fool
Free Article Join Over 1 Million Premium Members And Get More In-Depth Stock Guidance and Research
By Adam Levine-Weinberg – Sep 15, 2020 at 9:51AM

The mall REIT faces plenty of short-term headwinds, but its top-tier properties are likely to return to health within a few years.

Mall owners have been among the hardest-hit companies during the COVID-19 pandemic. Most indoor malls were forced to close in mid-late March, and many were unable to reopen for months. The mall closures -- and sharp traffic declines for retail properties that remained open -- led many tenants to withhold rent payments. Furthermore, numerous retailers have filed for bankruptcy this year due to the pandemic. Many plan to liquidate entirely.

Macerich (MAC 0.15%) has been caught in the middle of this carnage. As a result, shares of the mall REIT have lost nearly three-quarters of their value year to date. Despite that steep drop, Wall Street analysts continue to slash their outlooks for Macerich stock. 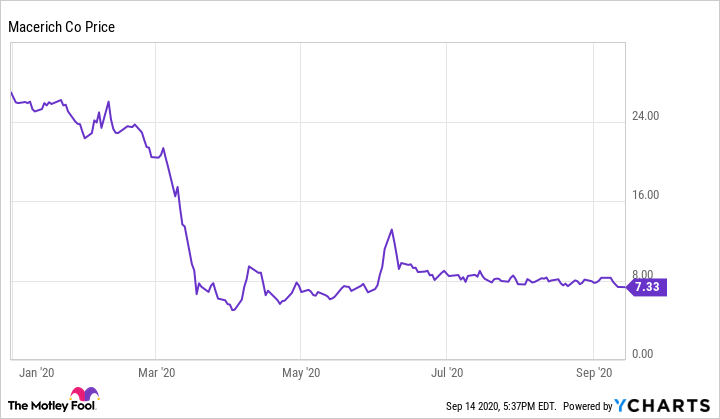 This growing bearishness is shortsighted. Macerich owns a stellar collection of properties. As the pandemic recedes, most of Macerich's malls should return to health, driving a big rebound in Macerich stock.

On Monday, Macerich shares fell despite a market rally, mainly due to a downgrade by Morgan Stanley. The analysts told investors to sell Macerich stock, arguing that widespread rent deferrals will likely lead to negative free cash flow in 2020.

The Morgan Stanley downgrade note also pointed out that the REIT has a high debt load, with a number of mortgages scheduled to mature over the next few years. Last month, Macerich's management acknowledged that the debt markets are essentially closed for malls right now, making refinancing impractical. The analysts worry that Macerich could be forced to sell assets at unfavorable prices or pay down mortgage balances in order to extend the maturities of existing mortgage loans.

While the Morgan Stanley analysts raise some valid concerns, Macerich is in much better position than Wall Street seems to think. For one thing, cash flow is already on the mend. The collection rate improved from just 40% for April and May to 66% for July (as of Aug. 11), with further improvement likely in August. Indeed, Macerich recently disclosed that cash on hand (including joint venture cash) increased from $573 million on June 30 to $649 million by the end of August.

Macerich ended the second quarter with $8.7 billion of debt, including its share of joint ventures. That far exceeds its meager market cap of about $1.2 billion. But importantly, nearly all of its debt consists of non-recourse mortgages. If Macerich defaults on a mortgage, it could lose the particular property in question, but the rest of its operations would be unaffected.

This debt structure gives Macerich valuable optionality. If some properties don't recover as well from COVID-19 as others, the REIT can default on those mortgages and turn the underperforming malls over to its lenders.

In any case, Macerich has ample liquidity. If modest reductions to its mortgage balances would facilitate extensions, that's an option. Management also confirmed last week that the REIT is on track to close a new $95 million mortgage on a residential tower attached to one of its malls later this year, adding to its liquidity. As vaccines become available and retail traffic starts to normalize, the debt markets should unfreeze, allowing Macerich to line up long-term mortgage refinancings.

Most of Macerich's malls will recover

Of course, the bull case for Macerich stock ultimately relies on the company's properties bouncing back from the pandemic. While it will take a while to fill all of the vacancies that are likely to crop up, the bulk of Macerich's malls are high-traffic retail destinations and remain desirable for a wide range of possible tenants. Many have substantial mixed-use redevelopment potential as well.

Some of Macerich's malls could come back even stronger after the pandemic. For example, a flagship RH opened at Village at Corte Madera near San Francisco in July. At Deptford Mall in the Philadelphia suburbs, a new Dick's Sporting Goods store and an Xfinity store opened in space previously occupied by Sears in recent weeks. Krispy Kreme, a Round One entertainment center, and a Crunch Fitness gym are still on the way. At Vintage Faire Mall in Modesto, California, another Sears redevelopment is nearing completion, with Dick's and Dave & Buster's set to open in the coming months.

Many other tenants are scheduled to open at Macerich malls over the next couple of years, comprising over 1 million square feet of space. Patient investors who ignore the Wall Street noise and buy Macerich stock could reap rich rewards as these store openings and others drive a cash-flow recovery for the mall giant in the years ahead.

This REIT Just Sold a High-End Mall for Nothing: What It Means
356%