Please ensure Javascript is enabled for purposes of website accessibility
Log In Help Join The Motley Fool
Free Article Join Over 1 Million Premium Members And Get More In-Depth Stock Guidance and Research
By Royston Yang – Sep 16, 2020 at 11:05AM

Can the sports giant still command a market-leading position in this day and age?

Nike (NKE -12.81%), one of the largest sports footwear and apparel brands in the world, faced an unprecedented crisis earlier this year as the COVID-19 virus spread like wildfire across the globe. During its fourth fiscal quarter, from March till May, around 90% of Nike-owned stores were closed for roughly eight weeks as a result of global lockdowns and movement restriction orders.

These closures threw a large spanner in the company's growth plans, but as of late June, 85% of stores had reopened in North America, while around 90% of stores in Europe, the Middle East, and Africa (EMEA) were back in operation. These temporary closures resulted in Nike reporting a 38% year-over-year plunge in revenue for its fourth quarter, as well as a net loss of $790 million.

Despite the seemingly poor results, shares of Nike have been hitting new all-time highs even as the pandemic has yet to ease in many parts of the world. Is the company able to recover from this crisis, and does this make the stock a buy? 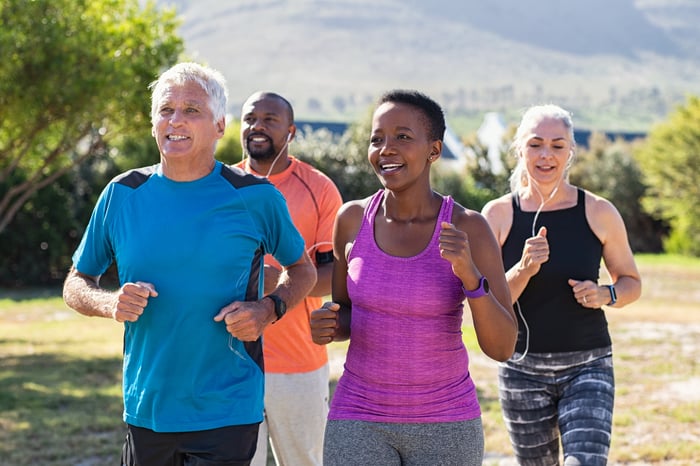 Even though stores were closing one by one in the wake of the coronavirus, Nike managed to shift some of its sales to its digital channels. This pivot to digital enabled the company to post a 75% increase in digital sales for the quarter. The increase was broad-based across all geographies, and digital sales ended up comprising 30% of total revenue.

CEO John Donahoe proudly announced that Nike had attained its goal of 30% digital penetration more than two years ahead of plan. This objective had been set in the fiscal year 2018, and the company had given itself five years to achieve it. Now, management has set a target of 50% of sales coming from digital channels in the coming years.

Nike gained 25 million new members through its suite of apps during the quarter, and customer engagement looks set to increase further as the company accelerates its digital transformation.

In the athletic footwear category, Nike continued to hold pole position, with seven of its sneakers found within the top 10 best-selling sports shoes so far in 2020. This dominance demonstrates the brand's strong appeal and should enable the company to bounce back strongly once the crisis eases.

Nike is also well-known for its innovative footwear that has pushed the boundaries of science. Its famous but controversial Vaporfly racing shoe, released in 2017, was almost banned by World Athletics. The shoes have been worn by numerous marathon winners in 2019 and led to new rules being established on the maximum thickness and number of carbon fiber plates that a shoe may contain. Nike's cutting-edge Vaporfly shoes have been proven to help runners lose less energy per step, thereby increasing overall running efficiency. In a marathon where every little bit counts, this detail can make the difference between winning and ending as a runner-up. In response to the new World Athletics rules, Nike announced its next-generation Alphafly Next% shoes as the successor to the Vaporfly.

However, as this shoe is expensive and delicate, the company has released a people's version of the Alphafly called the Air Zoom Tempo Next%. It's priced much more cheaply at $260 and is more durable than the Alphafly used for serious competitions. This shoe becomes available for sale Oct. 1, 2020.

The company has also very cleverly launched new footwear that is tagged to events or movies. Its new "Wing It" footwear range reflects this year's US Open venue at Winged Foot Golf Club, and a new "Nightmare on Elm Street" themed sneaker pays homage to the cult classic horror series of the 1980s.

Nike should continue to do well through the crisis as it leverages its brand strength and digital channels to garner more sales. The brand continues to occupy significant mind share with consumers, and with an attractive line-up of new shoe releases coming up, this should continue to generate enthusiasm and hype. Although the stock's hitting new highs, it still looks like a worthwhile buy if you have a five- to 10-year investment time horizon.