Please ensure Javascript is enabled for purposes of website accessibility
Log In Help Join The Motley Fool
Free Article
Join Nearly 1 Million Premium Members And Get More In-Depth Stock Guidance and Research
By Will Healy – Sep 19, 2020 at 8:45AM

The hardware industry it dominated will play a much less critical role.

Cisco Systems (CSCO 1.72%) was one of the hottest tech stocks of the dot-com boom. It performed so well that in 2000, it briefly achieved the world's largest market cap.

However, Cisco lost 90% of its value after the dot-com bubble burst, and it has struggled since. Although Cisco recovered some of its lost value and later became a component of the Dow Jones Industrial Average, it still trades at about half its 2000 high point.

Nonetheless, Cisco has invested heavily in R&D to transition from a hardware to a service-oriented company. Now the question is whether these moves boost Cisco stock over the next five years and possibly make it a hot stock again. Let's take a closer look. 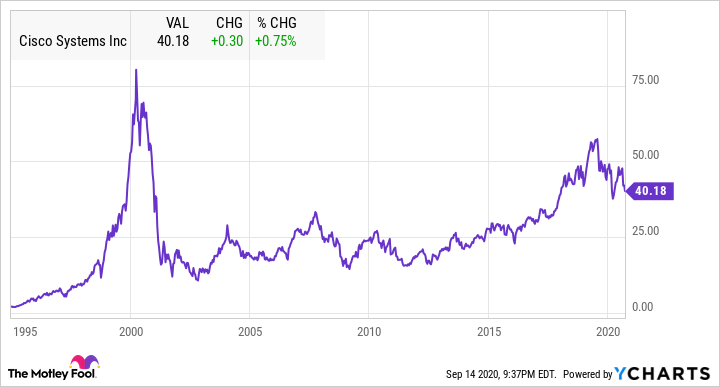 Despite Cisco's challenges, it remains one of the top networking companies in the world. While this continues to benefit Cisco as a company, it has not offered as much help to Cisco stock. With its hardware becoming increasingly commoditized, growth investors turned their attention elsewhere.

The dependence on hardware helped make Cisco a cyclical stock. This was apparent in the latest earnings report. In the fourth quarter, sales fell by 9% on a year-over-year basis, while diluted earnings fell by 4% over the same period. Although the company beat Wall Street estimates, Cisco stock sold off on the news due to lowered guidance. 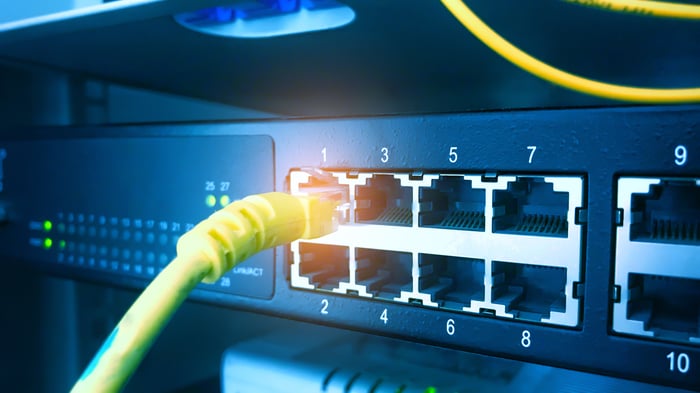 However, one fact from the earnings report deserves a closer look. Cisco has pivoted more into software-related offerings such as security and applications, and software and services made up 51% of the company's revenue in fiscal 2020. This helps in the long run, as it makes Cisco's revenue less cyclical and not as dependent on commoditized offerings.

Also, amid the coronavirus pandemic, Cisco Webex and its remote video connection services has received more attention. Recently, Cisco bought a company called BabbleLabs that uses artificial intelligence to eliminate background noise and enhance video quality. This could give Webex a competitive advantage over its main competitor Zoom Communications.

Additionally, Cisco's developing technologies could boost the company's revenue in time. Innovations such as 5G, Wi-Fi 6, and 400G technology, which powers data centers, could also play a critical role.

Is Cisco stock a buy?

Time will tell how much these technologies boost Cisco stock. However, Cisco is probably a buy regardless of the degree of these successes.

For one, unlike the dot-com-era version of Cisco, today's Cisco offers a generous payout. The company that once eschewed dividends changed its attitude and began paying its first dividend in 2011. The payout has risen every year since. The current annual dividend of $1.44 per share yields approximately 3.6%. This is double the average yield of about 1.8% for the S&P 500.

At a forward P/E ratio of around 13, Cisco looks like a reasonably priced investment. However, the lower multiple has become reflective of its slower and sometimes inconsistent earnings growth rate.

Still, analysts expect profits in fiscal 2021 to increase by just over 7%. This comes despite the company guiding toward falling revenue and gross margins in the first quarter of 2021, which began on July 1.

Finally, the fact that Cisco now derives the majority of its revenue outside of hardware shows the company has shifted its focus. The software revenue should bring stability regardless of the sales cycles of the hardware business.

Given these attributes, Cisco stock should trade higher five years from now. More importantly, if one of its new technologies takes off in a meaningful way, Cisco stock may experience significant multiple expansion along with its growth.